Affected by the Butterfly

Is anybody out there an "expert" regarding the movie The Butterfly Effect? Would anybody admit it if they were? 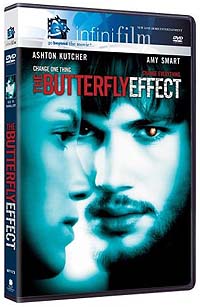 I'm asking because I saw and reviewed the movie several months ago. It wasn't terrible. Not the best acting, but, like many movies, it had a good concept that just wasn't executed very well. In a nutshell, it's about a guy named Evan (Ashton Kutcher) who, throughout his life, has suffered inexplicable blackouts. When he gets to college, he starts studying psychology to see if he can figure out why this happens. By the time he's in college, he has gone seven years without a blackout. However, one night, a girl he brings to his dorm finds a box of his journals under his bed. He's been keeping these journals at his doctor's request since he was seven in order to hopefully find some logical trigger for his blackouts. When Evan begins reading a journal entry to the girl, he is suddenly transported back to the point in time in his life that he is reading about. The difference being that he is traveling to the specific moments when he was blacked out. He is finally able to see what happened during those holes in his memory and he has full knowledge of what is going to happen in his future. What he doesn't immediately realize is that with each leap back to a blackout moment, he is irretrievably changing the future sometimes for the worse and other times for the better.

The title, The Butterfly Effect, refers to how one small event can change everything else. I guess it could also be called the domino effect, for that matter, but butterfly sounds much cooler. Plus Der Domino-Effekt was already being used at the same time for a German TV movie.

Sound interesting? Well, it was, to some degree.

My whole reason for posting is rooted around the ending of the movie.

Big spoilers abound. If you do not want the ending of the movie revealed to you, skip to the bottom of this post. You've been warned.

I seem to recall that the first time I watched this movie, the ending revolved around Evan killing himself in order to not continue to screw things up for all those around him. He has seen how his actions have affected the lives of his mother (Melora Walters); his girlfriend, Kayleigh (Amy Smart); her brother, Tommy (William Lee Scott); and their other friend, Lenny (Elden Henson). And, each time he tries to fix a wrong that he has inadvertently created in one of their lives, he winds up screwing it up for a different person. In a last-ditch effort to fix it all in one fell swoop, he travels back to an early point in his life and kills himself. Maybe I'm completely screwed up on this memory. Perhaps I'm thinking of Donnie Darko which had a similar ending. But this was what I remember seeing on the DVD.

Last night, I'm watching the movie on one of the Encore or Starz channels on cable. I don't know why I watched it instead of going to sleep. Katie was already sound asleep and it was 11 p.m. so I really should have just shut off the light. But I decided to see if I could last until the 1 a.m. end time. I did. And, while I'm glad I was able to actually stay awake that late which I feel I haven't been able to do for a while and, therefore, have started to consider myself "aged," I kinda regret it as well since watching the whole damn thing is what resulted in this post.

Yes, last night's version of the movie had a completely different ending. Evan still makes a last-ditch effort to fix the whole messy enchilada for everyone, however, he does so in a seriously variant manner. This time around, Evan goes back to the time when he first meets Kayleigh — they are seven and six, respectively — and whispers in her ear that he doesn't like her and if she comes near him ever again, he will kill her and her family. Needless to say, they never become friends and none of the future problems arise. Kayleigh and Tommy grow up having relatively well-adjusted lives. Evan, his mom, and Lenny also grow up in their own world that is completely oblivious to that of Kayleigh and Tommy. Well into the future, with both of them as working professionals, Evan and Kayleigh walk past each other on the streets of New York City. Neither one knows the other, but they both show signs of recognition for whatever reason. This is where the movie ended.

If there were two endings to the movie, this latter one is obviously the Hollywood ending. The nice, sanitized-for-your-viewing-pleasure ending that I'm sure was attached to the film in theaters. The former is likely what the director wanted to use, but test audiences said "nuh uh." How many people want to see the protagonist off him or herself as a way to resolve the central conflict? It also furthers my belief that the American movie viewing audience is laden with a bunch of controversy-deficient pusses. In the words of Indy's buddy, Jacques, from Raiders of the Lost Ark, "C'mon! Show a little backbone, will ya?"

Is this the case? Did the DVD contain an alternate ending and I just didn't realize that was the one I was watching at the time? Help.

Now I want to grab the Infinifilm version of the DVD again and watch all the bonus featurettes to get a bit more background on it. Wonder how inexpensively I can find it.

In other freakin' sweet entertainment news, it has been announced that a direct-to-DVD movie of The Family Guy will be released on September 27. The film, which will be titled Family Guy Presents Stewie Griffin: The Untold Story, will center on Stewie's attempts to find his real father after determining that there is no way he was spawned by Peter Griffin. I've gotta say that I'm loving this. And what makes it even better is that Seth MacFarlane is not trying to release this to theaters where it could, like so many TV-toons-gone-Hollywood before it, bomb terribly. I like the idea of direct to DVD for this one. I'm buying it on the first day it hits shelves.

And, now that I've started a discussion about DVDs, there's one last thing I'd like to say... I hate when companies change the packaging of a series of TV shows so that the seasons don't fit together when placed side by side on a shelf.

Sometimes, it's a small, but still intolerable change like our season 2 of Sex and the City. When it was released on DVD, season 1 had a transparent spine with reddish lettering. Season 2 came out, it had similar packaging, but an opaque blue spine with white lettering. No big deal. It still fit in with season 1 and the likelihood was that they were going to perform subtle changes such as this on all subsequent sets. Nope. Seasons 3 through 6 (part 1 and 2), all had the transparent spine with reddish lettering that was featured on season 1. Now season 2 sticks out like a sore thumb. Shortly after season 4 was released, they rereleased all the previous sets in a multiseason box set. And all of them had the transparent spine. Even now, you can find reprinted copies of season 2 with the conformist end panel. But why buy a new copy now? I already have the second season and I don't want to buy another copy. It just ticks me off.

But far worse than this is the atrocity being committed by creators of The Simpsons. Seasons 1-5 are already out on DVD and they recently announced season 6 for release on August 16. For season 6, the cover has changed to a new style that they plan to use for seasons 7-16 as well (should they ever actually get off their duffs and start releasing them at anything greater than a snail's pace; I'm still convinced that DVD will be dead before they finish releasing the entire run of the show). And this is no little spine recoloration.

Here is what season 5 looks like. And seasons 1-4 are very similar with a different color scheme but each has the die-cut TV screen showing some image of the family and a friend or two or three on the front... Here is the sorry excuse for season 6... 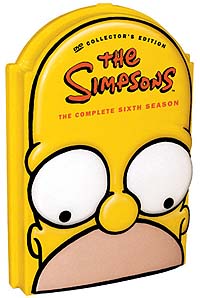 I might be a bit more agreeable with the design of season 6 if it wasn't so divergent from the previous seasons and if it wouldn't look so damn awkward on my DVD shelf. Sue me for liking clean lines and rectangular boxes. Something just looks really cheap about the Homer head box. Grrrrrr...

Jun 21
As a result of her and Tom Cruise doing nothing but going on and on about their farce of a relationship, Katie Holmes is now out of the sequel to Batman Begins. Yes, they are already planning a sequel and...
Next Post

Strange. We both posted the same subject with the same conclusion on the same day! Funny thing is that I had grabbed the photo off of "TVShowsOnDVD" days ago to write about it, but didn't have time until yesterday.

Oh... and before The Simpsons fiasco, the biggest offender in the packaging switch was Six Feet Under. Their Season 1 release had an interesting pop-up feature when you opened the box. Then I receive Season 2 in the mail and it's just a plain box with no pop-up that's a good half-inch shorter on the shelf. I was so mad that I vowed to never buy another DVD for Six Feet Under. Alias is another that doesn't look good on the shelf together. I won't be buying Season 4. Law & Order another... they switched from paper to plastic with an entirely different look. CSI has done the same, but at least they made an effort to keep the look similar. I am just waiting for Friends Season 10 to see if they finish up with the same look, or switch to something entirely different and stupid-looking.

There is another one with just a subtle change. It is the Felicity set. The boxes are all consistent, but for season 3, they switched to slimmer DVD cases (not the super slim cases like with Family Guy; but more of a medium sized case that falls between Family Guy and standard DVD snap cases). It makes season 3 and 4 boxes thinner than 1 and 2. Not a big deal, but I love the smaller cases so much, I wish they did that with 1 and 2. I wish all DVD box sets used medium or slimline cases. The sheer number of sets I have means that I could use all the help they're willing to provide in terms of space savings.