As a result of her and Tom Cruise doing nothing but going on and on about their farce of a relationship, Katie Holmes is now out of the sequel to Batman Begins. Yes, they are already planning a sequel and they have already signed Christian Bale (Batman/Bruce Wayne), Michael Caine (Alfred), and Morgan Freeman (Lucius Fox). I'm not too terribly surprised about the dissing. After all, has she been doing any promotional work for the movie at all? Nope, she's doing nothing aside from blushing and gushing over Tom and, while I may have thought it was cute at first, I am thoroughly disgusted by it now.

Oh yeah, I guess this puts Katie Holmes on the list of people that should disappear a la Paris Hilton. Time to amend the proposal.

As for new casting for the sequel, fanboys of the Web have made Mark Hamill (Luke Skywalker and voice of The Joker in Batman: The Animated Series) their number one pick to portray The Joker. I'd love it. I think that would be brilliant casting. You draw in fans from the animated show because of the familiarity with his voice, you draw in everyone that was a fan of him as Luke. Damn, the possibilities are limitless. Please cast him... please cast him... 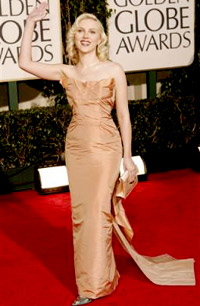 I also must say that Scarlett Johansson is my new hero. I've dug her since the early stages of her career in The Horse Whisperer and have liked her up through Ghost World and Lost in Translation. But now I bow before her. She is a goddess. Why you may ask? Read this from IMDb...

Cruise "Tried To Convert Johansson"
Scarlett Johansson pulled out of appearing in the second Mission: Impossible sequel after Tom Cruise tried to convert her to scientology, according to reports. Cruise, who produces the action adventures, met with Johansson ahead of casting for the upcoming Mission: Impossible 3 and took her to one of the controversial religion's headquarters, claims Radarmagazine.Com. A source tells the website, "After two hours of proselytizing, Cruise opened a door to reveal a second room full of upper-level Scientologists who had been waiting to dine with the pair, at which point the cool-headed ingénue politely excused herself." Officially Johansson quit the film because of scheduling conflicts after the film was delayed so Cruise could make War Of The Worlds.

You go, girl! Should this story be true, then that's the sort of personal conviction I like to hear about. Way to stand strong against the moral minority, Scarlett.

And since none of you commented about me rerating movies on my site, I've made the executive decision to go ahead and do it. You will all know that it has happened because I will list the movie in the Recent Updates box as a new review. I will no longer list the original review as that particular take is no longer mine so why display it as though it is?

The other reason why I'm doing this is because I ran across another movie that I get the feeling will wind up being subject to a rerate. I finally got around to watching Napoleon Dynamite yesterday. A different movie to say the least. Not at all bad as I was expecting it to be. It actually looks like it might be good once I've watched it a second or third time and have allowed myself the opportunity to really soak it in. This happens from time to time. It's good to recognize this. Some foreign films with subtitles need this chance, as well, since you can miss some of what is happening on screen while reading the translations. Damnable thing, but you get used to it.

My rerating and a couple other reviews will be coming soon.