What steps do you take to make your office reflect who you are?  What kinds of little tchotchkes do you have on display?  Posters or photographs?  Plants?  Feng shui fountains?  Let me know.  I'm curious.

I'm asking because we are talking about having an office cleaning day next month and I was looking around my office to see what stuff I could take home and what stuff I'd rather not do without.

In terms of odd things (not intended as decor), I have a toothbrush, small tube of toothpaste, a flosser, a pair of tennis shoes, and a stick of deodorant (I use the gym here during my lunch breaks).

May sound like a lot, but it really isn't. 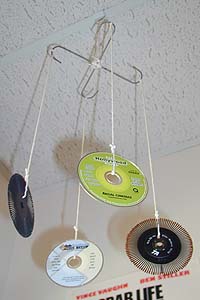 So how do you decorate your workplace?  What makes it unique?  Be honest.

I think the oddest thing I have is also what gets the second-most comments from people visiting my office, and that is a mobile (as in MOH-beel) I made a few years ago. You know, the kind that you hang from the ceiling and let dangle in midair.  Several baby cribs have them.

It's something I created from odds and ends that I found here at work.  I constructed the frame with two double ended wire hooks I found in our kitchen drawer (I work in a house purchased by the university that is across the street from campus; hence why we have a kitchen) and tied in a cross formation using string found in our basement.

Hanging from the mobile are two old typewriter letter wheels on opposite ends and two mini data CDs on the other ends.  I found the letter wheels in one of our supply drawers and I obtained the mini CDs from trade shows.

People love it because it is such a juxtaposition of technology.  The old and the new, per se.  Ancient typewriter parts interacting with more modern media technology.

At first, I was just searching for items that were similar in size and weight to hang opposite each other.  Then I looked at it when all was said and done and realized that it actually speaks of so much more than just boredom.  So, of course, I make it sound like the result was completely intentional when people ask me about it.

For those interested, the item that gets the most comments is my Scarface poster.  People really dig it because of how big it is.  Size really does matter.

I've been meme'd - what hell hath I wrought?

Jun 24
Recently, Dave (of Blogography fame) was hit by another blogger named Neil with a meme. Many fellow bloggers know what a meme is, but I know I have a few readers who are not bloggers and would likely appreciate an...

Hmm... Cubicle decor. I should start by saying that my cubicle is actually 4 desk areas large, so I have a LOT of junk!

And my personal "non-kid" favorite is a Christmas caroler made from binder clips, a paper clip, a rubber band and a post-it note... all courtesy of a cute book that is for making holiday decorations from office supplies. (I'd put in a nifty picture, but I'm technology impaired.)

I also have a larger than average collection of office tchotchkes with our company name and logo (since I'm in charge of ordering them for our company). They include a squishy gel ball, a foam baseball, a silver cup, a box of brainteaser cards, a leather business card holder, a picture frame, a golf ball marker and baseball cap, a foam football and some cheesy notepads.

Well, I have no idea who wrote this comment (Allison?), but I like knowing I'm not the only one who has all kinds of stuff on the desk and shelves in his office.

I can only imagine that the collection will increase ten fold as I have kids.

Sorry. Yes, it was me. The little "remember personal info" thingie didn't work.

I have a map of the world with all of my Hard Rock Cafe city visits marked with little pin flags. Four laminated print-outs from ExplodingDog.com. A couple of framed prints from Robert Lyn Nelson. A Bad Monkey poster of my own design. A Mickey Mouse wall clock. A Curious George calendar. And a Bourbon Street metal sign.