Home Archives Profile Subscribe Links Rankings
It's my prerogative... isn't it?
Who said defecting is a bad thing?

Made me an offer I couldn't refuse

There is one other thing a man should never admit to, and that is never having seen The Godfather. 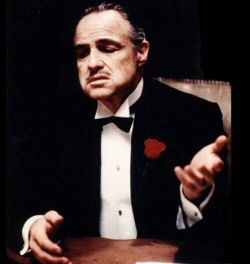 Until today, I was one of those men. I never had much desire to see it. The concept kinda bored me in all honesty. I had seen bits and pieces of the first one. Well, mainly just the horse's head scene as I really wanted to see that, and only that. But, my friend Brian loaned me his box set a few months ago and I finally watched the first one today. Now before you get on my case about taking advantage of his kindness by not watching them right away, bear in mind that he and his wife still have our copies of The Bourne Identity, The Bourne Supremacy, Ray, Jerry Maguire, and Mystic River and have had a few of those for an equivalent length of time. And I even tried to give them back to him a couple times saying that I was never going to have a chance to watch them. He made me keep them until I do. So I'm starting.

The first film is a lot better than I was expecting it to be. Yes, it is slow and not nearly as engrossing as my personal favorite mafia film, Goodfellas. But the story builds nicely and Francis Ford Coppola does a great job with character development. What I really liked is that, like the original Star Wars, the first movie in both series can either stand alone or you can go ahead and watch the sequels. But you're not really forced to take one action as opposed to the other. They are both very self-contained films.

Now I just need to find the time to watch the other two. Then I think I'll watch my copies of Goodfellas and Scarface again and rent Casino from Netflix. I'm on a mobster kick right now. Ooooohhh, and Untouchables. Good stuff.

Oh, and sorry I couldn't find anything to write about yesterday. Here I was well on my way to having posts up every day of the month for only the second time in the seven years this site has been up. Blew that one, didn't I?