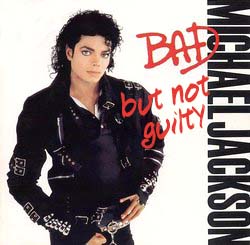 Michael Jackson is not guilty, eh? I've gotta say that I'm disappointed by the findings in the case. Maybe he shouldn't be guilty of all charges levelled against him, but definitely a couple of them. Here are the formal charges as per The Scotsman (go fig I had to use a Scottish source to find the list of formal charges, eh?)...

I wholeheartedly believe he is guilty on counts 2-10. The only one I think there is some wiggle room on, per se, would be the first count. It's all a matter of "he said/she said" there. That and I think the victim's mother really overexaggerated the claims here. But we have all kinds of descriptions from independent sources claiming that he did molest children in his bed, his shower, etc. I'm not saying it's entirely his fault. What mother in her right mind would actually allow their child to stay at his place in his bed? She needs a psych eval as well.

There must be something else going on here if they found him not guilty. Something I'm missing. Is there anyone out there that can reasonably explain why he got off? Lesser charges have been brought against non celebrities and they've been put away for years as a result. I think it's just a load of shit the pedestal we put celebrities on. Jackson has maneuvered his way out of legal trouble a couple of times now and he's just going to keep playing the system, IMHO. Why would you stop if you see that you can get away with it?

Funny thing was that I was listening to Woody, Tony, and Ravey on Q101 yesterday afternoon on my way to softball and they were talking about this one "Former Prosecutor" named Wendy Murphy who was so pissed off by the jury's findings that she resorted to calling Jacko the "Teflon Molester." That's just classic.

Oh, and I apologize for my terrible Photoshop job on the cover of Jacko's "Bad" album. It had to be done, though.