Wendy or Danica? Danica or Wendy?

Tidbit 1: You might recall a little ways back that Katie and I took a trip to Green Bay, Wis., at the beginning of April for the wedding of her cousin, Mike, to his fiancee, Wendy. I was recently reminded of Wendy when I looked at last week's issue of Sports Illustrated featuring Indy 500 racer Danica Patrick on the cover. And I think you'll see why.

Pictured here are Mike and Wendy (sorry, the photo was pretty dark to begin with)... 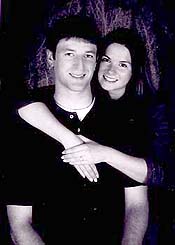 This is Danica Patrick, the fourth-place finisher at the 2005 Indy 500 and the first woman to place as a top-ten finisher as she appeared on last week's cover of Sports Illustrated. 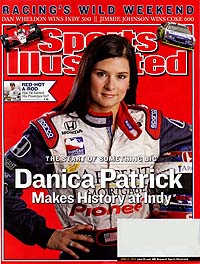 I think it's safe to say that we have a Halloween costume nailed for Wendy for this year, wouldn't you agree? Just a bit uncanny, to say the very least.

Tidbit 2: We got some more work done on the bathroom today. The filler board is now installed as is the toe kick. The light is also installed although we are probably going to move it over an inch or two sometime soon. We just need to cut one more strip of quarter bead for the trim behind the bathroom door and install some moulding for the top of the linen cabinet and the beast should be all done. Thank God.

I would have posted some photos of our progress, but, to be honest, what we did wasn't really all that much to look at. A fixture, an outlet, and some boards and trim. Not exactly Wow!-factor photos here. I'll hold off until it's all done.

Tidbit 3: Lastly, I finally connected the final rear surround speaker to our stereo. The thing has been hanging on the wall for several months now and I just never got around to actually hooking it up to the receiver. Well, it's done and we now have sound behind us when we watch DVDs or play CDs. The only catch is that we don't have the separated sound that most DVDs are capable of because, as I recently discovered, we need to have the DVD player hooked up to the receiver via either optical output or coaxial. The RCA cable I'm currently using doesn't allow for Dolby Digital Surround Sound. We are only able to get Dolby Pro Logic sound as is. I may have to look to see if our DVD player has optical outputs. I don't think it does, though.