I was under the impression, from the day that my mom ordered our plane tickets to come down here to Florida, that we would be flying United... Chicago's all-but-defunct aeronautical pride and joy. 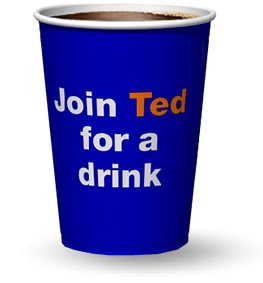 However, on the way in to O'Hare, she revealed to me that she just found out we were actually flying Ted, United's low-fare solution.  I wasn't quite sure what to make of that.  This is the first time I have flown one of the new breed of low-cost carriers since they became en vogue.  I have been on some of the old school cheap-o flights and they've all had their ups and downs.  No more so than flying the "ritzy" airlines.  So I was apprehensively curious.

I was right to be apprehensive.  First off, we were stuck in a waiting area at a gate that felt like it was an afterthought on Terminal 2 at ORD.  It was branched off one of the main hallways and was this tiny little excuse of a gate.  Actually, there were three gates there in a space that normally would have served one or two gates well.

Then we got on the plane.  Nothing too terribly worth noting.  Until the flight attendants came around, that is.  The woman in the seat next to me, Cindy, had been trying to get an attendant's attention for several minutes because the already nearly drunk off his keister bonehead in the seat in front of her had already reclined his seat.  We weren't even in the air.  But the attendants never responded to her waving.  No matter how hard she shook her hand, they never came by.

Oh, and by the time we landed, the guy in front of Cindy was legitimately drunk.  So was the girl in the seat next to him.  You know it's bad when the flight attendant is keeping track of what they're drinking and calling them on it.

A little later, they came by with food and drinks.  For a "snack box" we would have had to pay $5.  Then, the drinks you do get for free are just a small plastic cup that is already 1/3 to 1/2 ice.  And they don't come around for a second serving.  Usually I am able to talk a flight attendant into leaving me the entire can of soda or whatever I'm drinking.  Not on Ted.  Nope.  No way.  Nuh uh.  When they say "no frills," they are not mincing words.  They mean it.

But there were some positive aspects to the flight.  Cindy was really cool and we were talking a bit.  After takeoff, she noted how beautiful some of the clouds below us were and that she wished she had her digital camera.  I told her I had one and she replied by saying that my camera doesn't do her too much good.  I said that if she took some shots with my camera out the window, I would e-mail them to her.  She did.  And I did, too.  And I've got a few pretty cool pictures as a result that I will post on Flickr when I get home (I don't have my USB interface cable with me at the moment... damn).

Another good thing is my lovely new Insignia portable DVD player.  After Cindy and I were done talking, we both broke out our portaplayers.  She watched Austin Powers in Goldmember while I finally got around to watching Friday Night Lights.  A damn fine movie, I might add.  This little player is awesome.  It's a 9" widescreen display and works quite nicely.  I never really wanted a portaplayer before, but I'm glad Katie and I did buy it.  It will definitely come in handy.

And another positive about the whole thing is that we were on time both for take off and landing.  Even flying through some of Hurricane Rita's tailwinds didn't slow us down.

But I am now here in Florida at my grandmother's house typing to you all in the wee hours from her PC listening to either my mom or my dad, or both, clear cutting a forest in the next room.

You best believe it that I got to get away...

Sep 22
From time to time, you run in to those days that you really want to go to work. Sometimes it's because of some great new project you are looking forward to working on or because of some recognition you are...
Next Post

While my guitar gently weeps.

Sep 24
This morning, instead of getting up for a walk/run like I had hoped, I went for a golf cart trek around my grandmother's country club with my dad. We went around everywhere and even down this wonderfully creepy dirt road...

This sounds like my flights on Air Tran. BARE. BONES. Your description of the free drink was dead-on. They did pass out tiny packages of very stale pretzels, but anyone asking for seconds was denied. This is how tightly we were packed: I got up twice and went into the TOILET CLOSET to get some breathing space and stave off impending claustrophobia. I'm not kidding. We were on time, with uneventful flights, but had to endure the most minimal of comfort levels. I guess you can't expect much for $198 round-trip, LAX to Atlanta.

No, I guess you can't expect much. But the little things like being able to part with an entire can of soda instead of just a cup or providing free snacks (aside from the shitty little snack mix bag) shouldn't be that big an expectation, should it?

Some severe changes need to happen in the airline industry. It's just such a sad, pathetic shadow of its once-glorious self.