I think I'm going to tackle a couple of memes in the next post or two.  Nothing that I've been tagged with, but ones that I've either read on other blogs or am going to develop on my own.  I, also, don't plan to tag anyone with them. But, should you feel so inclined, feel free to steal them anyway.

The Halloween Movie Meme (courtesy of Johnny C.)
List your top-five Halloween or horror flicks:
Yes, I did post my list in his comments, but I figured I would copy them here with some expanded commentary (as I'm known and reviled for).

1.  The Exorcist: The Version You've Never Seen
Hopefully, by now, it's the version that nearly everyone has seen.  I can't imagine a movie ever coming out that scares me like this one still does.  Even if I know what's coming up, I still jump out of sheer anticipation.  And, damn, if that cut SpiderWalk scene doesn't terrify the bejeezus out of me.  See it, love it, fear it.

2.  Stigmata
I really didn't expect much of this movie as it is a modernized horror flick and it stars one of the Arquettes, but it was damn good.  And freaky.  It's all about a woman in New York City who spontaneously bursts out in physical manifestations of the scourging of Christ.  Just promise me one thing, you will rent the director's cut and watch the extended version.  The non-theatrical ending is much better than what people saw in the theaters. 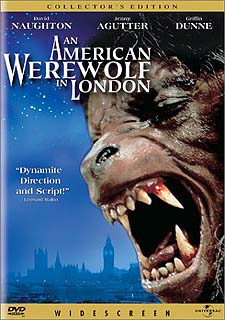 3.  An American Werewolf in London
This is the ultimate werewolf flick, hands down.  Two young men from the U.S. go backpacking across England when they are attacked by a werewolf.  One dies while the other starts showing symptoms of slowing turning into a wolf himself.  Yes, by today's standards, the special effects may seem like they are lacking.  But if you are a film buff and like to see how special effects have evolved over the decades, this is a must see as it is one of the finest examples of Rick Baker's make up work ever.

4.  Halloween
In my mind, no character from a slasher flick can even compare to Michael Myers.  Well, except for the sheer physical presence of Kane Hodder as Jason Vorhees (too bad his scripts weren't better).  And, as pointed out in the film Scream, Jamie Lee Curtis is the Queen of Scream.

5.  Evil Dead
Campy?  Check.  Bloody?  Double check.  Just plain cool?  In spades, baby!  The King of B-Movies, Bruce Campbell, stars as "Ash" Williams, just a guy out with some friends for a night of drunken debauchery in a cabin in the woods.  Of course, plans start to go astray when they uncover the Book of the Dead and open it for a little read.  There are two sequels for this film -- Evil Dead 2 and The Army of Darkness -- and I highly recommend the latter for laughs and thrills.

I will give honorable mention status to films like The Shining, The Others, The Sixth Sense, and Scream.

What are your faves?

Oh, and SJ at Chronic Listaholic did a Top Halloween Songs meme.  I would replicate that one here, but my choices would be almost exactly the same as hers.  So just read her list.

Back tomorrow with a homegrown (read: I made it myself) Halloween meme.

Oct 25
Ooohhhhh... two posts in one day! Hey, can't help that I've got lots of cool stuff to discuss. Actually, it's a bunch of smallish items I wanted to mention. Of course, this just means that I won't have jack to...
Next Post

Oct 27
Well, more specifically, the Chicago White Sox are the champions... er... my friends. Finishing out a season in which everyone was convinced they would eventually roll over and die like a fish caught on dry land, the White Sox have...

Great. Now I won't be able to sleep tonight, in anticipation of a NEW HALLOWEEN MEME!!! OMG, I can't wait! OK, I'm gonna go do a Halloween movie list of my own.

I have NEVER SEEN an Exorcist movie. The book scared me so bad, I BURNED it in my fireplace. Swear to God.

That was a damn fine book; didn't burn my copy though.

Stay away from all the sequels to this movie. Not worth ruining the memory of the original.