Archives Profile Subscribe Links Rankings
Another one bites the dust...
Life's no fun without a good scare...

I know, I know.  Head for the hills!  Protect the kids from the cats and dogs raining from the skies!!  Kevin's bitching about his beloved iTunes!!!

A little over a month ago, iTunes upgraded to version 5.  Some people had issues with the conversion... mostly aesthetic in scope (although there were rumblings of random songs disappearing).  I never had any problems with it.  It still worked.

Then, a mere three weeks later, Apple launched iTunes 6 to coincide with the new iPod launch and the fact that the store would be selling videos and have a beta version of "Just For You," a section with recommendations based on what you're purchased.

Now, the functionality issues are arising. 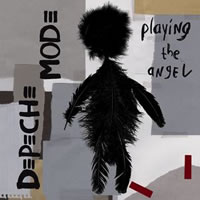 Well, I preordered the new Depeche Mode album Playing the Angel about a month ago, quite a while before iTunes 6 was launched.  This album, since I preordered it, came complete with a bonus track and video.  Cool.  I've preordered albums before with videos attached to them from iTMS and never had a problem (The White Stripes' Get Behind Me Satan and Black Eyed Peas' Monkey Business).  They play fine and I enjoyed watching them once or twice.  Cool little feature to make me want to buy the album from iTMS instead of from a bricks-and-mortar store.

I got my e-mail notification this morning that Playing the Angel was available to download, so I clicked on the link to download and got an error message.  Three years of constant iTunes use and I've never received an error message.  Guess I was due.  So I was fine thinking it was just an overload error.

Then I read the message...

Apparently, to view any of the videos available now in iTMS requires not only iTunes v.6 but also Mac OS X 3.9 or later (preferably X 4.0).  The computer I use for purchasing and ripping music is my work computer simply because my PowerBook at home only has a 6 GB harddrive and I have far more music in my collection than that, but it does have OS X 3.9.  So I use my work computer complete with 160 GB harddrive, but only OS X 2.8.  And there's no way that I can upgrade the OS at work unless I want to shell out for it with my own cash.

I ordered this album before this new system requirement was announced, so I should be allowed to download anyway.  I couldn't even download the songs sans the video.  I would've been willing to forego the video if it meant just getting my music.  But the only way to resolve the situation was to cancel the preordered "with video" album and buy the standard album version.  Not only does this mean that I forego the video, but I also lose the bonus track.

Kevin's not a happy camper.