Yesterday, my friend, Jason, left a message on my cellphone asking me what I was doing during the Notre Dame/USC game today.  Later tonight, Katie and I are getting together with Jason and his wife as well as a couple other friends and going out to dinner.

I figured Jason wanted to get together and watch the game.  However, since Katie was going to be at work for a few hours today, I figured I would spend the time finishing up some of the upper-level sections of the stairwell walls that still needed to be painted (when I told you a while back that I was "done" painting, that was only in reference to the ceiling).

When I finally got around to calling Jason back, I was well into my painting project and I had turned on the game as background noise.  I pretty much just turned on the TV and scanned the Comcast channel guide until it said "College Football: Notre Dame at USC."  I didn't pay much attention to the rest of the details.

While on the phone with Jay, I explained that I was painting but that I had also turned the game on in the background.  He was a bit confused. 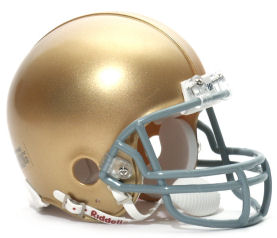 Jason: "You can't be watching the game."

Me: "Then what the hell am I watching?"

Jason: "Yeah, that's what I thought."

In retrospect, it really does make sense.  I only clicked it on and was faintly listening while painting.  I guess it certainly goes a long way to explain why I occasionally heard reference to names like Steve Beuerlein, Rodney Peete, Tim Brown, and John Carney.  I just figured they were talking about an old game when those names came up.  When I finally did look at the screen, it should've struck me as odd that Charlie Weis suddenly looked an awful lot like Lou Holtz.

Well, the Irish won the matchup 38-37 in one of the greatest games in the history of the Notre Dame-USC rivalry.

Maybe the luck of the Irish will still be on their side 19 years in the future... at 2:30 in the afternoon.

You and I... defying gravity.

Oct 14
Wicked I have never written a review of a theatrical performance, live concert, or performance art before. However, I was so moved by Wicked last night that I felt the need to talk about here in a bit more detail...
Next Post

Oct 16
I received this e-mail from TiVo a couple days ago (there is a bit more to it, but this is the bulk of it)... This was a really cute e-mail. And definitely effective as well. I love the whole "Take...

I love the classic games they'll show. I prefer the basketball games to the football, but nonetheless, they are all great.

They actually came out with a Michael Jordan DVD that has his 6 best games of all time on it. It rules. I watched the game where he scored 67 points on Larry Bird in Boston, but still managed to lose the game.

The Bulls pre-1991 could suck it up sometimes!

So much for the good luck. Heckuva game, even if I had to run home from the Nevada game to get to the TV and see only the final two plays. What a great two plays those were. Unfortunately, we fall on opposite sides here. I'm like a Yankee fan now, everyone hates me because my team s too good. Fight on!

johnny - yeah, the Bulls could truly suck it up before 91. And then again after 98. Until this past season, they were the laughing stock of Chicago. Last year was a ton of fun to watch though. I've become a fan again.

mrjerz - Nah, I don't hate you. You're excused. You seem to like a lot of SoCal teams, so it's not as though you are a bandwagoneer as I'm currently being accused of despite the preponderance of evidence to the contrary (details on my blog). Aye aye aye.