Archives Profile Subscribe Links Rankings
Life's no fun without a good scare...
Through the tears that I have cried...

Have you ever wondered what would happen if just one little detail in your life had happened just a bit differently?  If you had stayed home instead of going out one night?  If you had made a left turn at the light instead of a right?

My friend and I were discussing this the other day.  We were talking more in terms of bigger decisions such as college choice (for him) or studying abroad (for me).

But what about the smaller, seemingly insignificant decisions that we make on a daily basis?

Take a moment to think of one such decision that would have irrevocably altered your life. 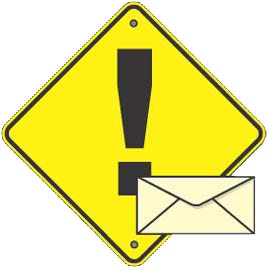 For me, that would be as simple as an e-mail.  If I hadn't opened an e-mail that was sent to me back in December of 1998, my life would be so immensely different than it has turned out.

Back in December '98, I was a Hall Director at Northern Illinois University.  I wasn't your regularly detached Hall Director as I had just received my B.A. degree a mere year and a half earlier, so I wasn't too far removed in age from the students in my charge.  Heck, in some cases, they were older than me (I had a 21 and over floor in my building).  Being so close in age meant that, in a few instances, I was actually pretty good friends with my residents and R.A.s.

One person, in particular, I had become relatively close with.  We would talk about many things outside the scope of normal Hall Director-Resident conversations.  Family, friends, hobbies, TV shows, personal likes and dislikes, you name it.

Come December and Christmas Break, this person was going home for the month.  Just before leaving, they stopped by my office to leave me an e-mail address and get mine as well so we could continue "talking."

A week or so had gone by and I went into my e-mail account and read through my inbox.  Nothing worthwhile.  Then I jumped into my junkmail folder.

Typically, I just delete them all without a second thought given.  But, every once in a while, I will actually look at the sender name and subject line to see what kind of funky new scam is happening in the Web world.

This time, I saw one that said "Remember Me?" in the subject line from a sender I couldn't identify at all.  For whatever reason, I opened the e-mail.  Call it morbid cybercuriosity.

Turns out the e-mail was from this friend of mine whose own e-mail was inaccessible and was using her mother's e-mail account to try to get a hold of me.

Now that I knew from where to expect the messages, I was able to set my account to deliver these particular e-mails to my inbox.

And, two years and ten months later, we were married.

Moral to this story:
Yes, e-mail can be a wicked curse, ridden with spam, viruses, Trojan Horses, bad jokes, and the like.  And, while I'm not advocating opening every single e-mail in your junk folder (please God, don't do that!), take a second to look at the list of senders and subjects before you empty the folder out of principle.  Who knows what kind of good stuff might have been sent your way.

In 2002, a Google search unexpectedly led me to my high school sweetheart, whom I had not seen or spoken to since 1972. We had a lovely "reunion" via the Internet and phone calls, catching up and reminiscing. After about 6 weeks, the communication dropped off. Five months later — out of the blue — I received an email from his younger brother, whom I barely remembered. We'd met once, when I was 16 and he was 10. He said he'd "always had a thing for [me]," and would like the chance to get to know me. I emailed him back, and he called me that evening. We fell in love via emails, IMs, and cross-country phone calls, and Bret proposed to me via cellphone while I sat in a FedEx parking lot, opening the package that contained my ring. Two months later, he sold his business, packed up his life and moved from Georgia to California to marry me. He's the best thing that's ever come my way.

SJ, was it awkward at all with the first brother that you were dating/marrying his kid brother?

I actually had a real "email romance" before Katie and that one bombed miserably. Thankfully, the email romance aspect of it for Katie and me was really only about a month long. Then she came back to school.

Johnny, then I'm happy and sad for you. Mostly happy, though.

And to both of you and anyone else reading... I have apparently inspired mrjerz to do a podcast about how he met his wife. Check it out.

Kevin, yeah, it was kind of rough. Mostly because of the residual feelings we both still have for each other. Not so much awkward as . . . painful. I give serious props to Bret for his stubborn refusal to take no for an answer all the dozens of times I said it. Now the three of us have a wonderful, deeply loving relationship that we call a triad soul. There are certain lines that Randy and I are careful to never cross, and Bret is far more trusting and tolerant than the average man. So it works for us. But I doubt it would for most people.

By the way, I've been meaning to tell you that the love you and Katie share is so evident in your photos together. Your faces just glow with it. You guys are an adorable couple! Clearly, true soulmates.

Aww, cute story! I never go to "frat" parties, but I was really bored before school started my freshman and went to one with a new friend. That is when I met my fiance, completely by chance. Life is swell.

Why, thank you (to both SJ and Kilax)!

Funny how those things work out, isn't it?