Yep, four years ago, today, Katie and I were married.  I know I say this each year, but how she continually puts up with my antics year after year is beyond me.  I'm certain that living with me is an exercise in patience, grace, and love.

Since Katie and I are going to see Wicked tonight, we decided to not spend a lot on gifts for each other.  Her gift to me, aside from the tickets to the show, is my ticket to go see the Chicago Bears take on the Minnesota Vikings this Sunday with my friends.  No, she's not paying for each of them as well.  Just me.

I do feel bad about going since this is our anniversary weekend.  But she said to go.  The other reason I feel bad is because this is the weekend of the Adams Family Octoberfest (Katie's family).  I love Octoberfest and was banking on it being on the 22nd, which is when it was originally planned.  Then my friend, Brian, invited me to the game and Katie said to go.  It was only after I agreed to go, and Brian banked on me buying my ticket, that we discovered that Octoberfest had been moved up a weekend.  In the immortal words of Rex (Wallace Shawn) from Toy Story, "Great!  Now I have guilt!"

Note to readers: I am a big fan of Wallace Shawn and find him to be one of the most easily quotable actors ever.  Therefore, whenever the opportunity arises, I do (quote him, that is).

I gave my gift to Katie last night because I wanted to be able to gauge her reaction at a time when she wasn't rushed getting ready for work.  My gift to her was a sterling silver, heart-shaped locket.  I even managed to put photos in it.  I love the locket and Katie says she does, too.  Now that I know she likes it, I'm going to take it back to the store and have it engraved.  Nothing like having it engraved and then find out she doesn't like it.  That would be just my luck.

I also want to take the photos in to a fotomat to have them printed.  I used a color laserjet printer and some glossy Kodak printer paper.  But it's still just that... paper.  When you try to get it inside the grooves of the locket, the edges fray a bit and it looks somewhat cheap.  I figure if I can get the pictures printed on good photo stock, the edges should hold up better when I put it in the locket.  Thankfully, the maker of the locket included a handy dandy little template that allows you to cut out your photos to the proper size.  No guesswork needed.  Yay!

Here are the photos I chose... 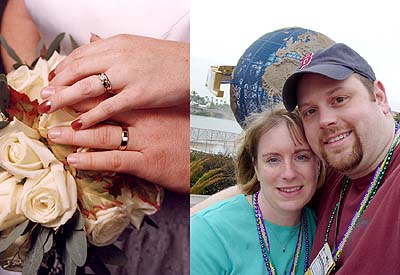 My other gift to Katie was to have roses delivered to her at work yesterday.  I chose yesterday because we are leaving straight from work to go see Wicked and I didn't want her to have to stop at home to drop them off.  Good thinking, right?  Well, guess what?  She never received them.  I had completely forgotten about it until we were laying in bed last night and I asked her if anything happened at work today.  She said, "no."  So, this morning, while she was on her way to work, I called her boss and confirmed that nothing was delivered.  Her boss even called the front counter to see if any had come in yesterday.  Nada.

I called up the customer service department at FTD.com and complained.  They said they'd look into it and call me back.  A couple hours later, Katie calls and tells me that they found the flowers in the cooler at work.  They were delivered nearly two hours earlier and not to the pharmacy as I had requested when I ordered them.  Nobody left a note that flowers were delivered and nobody remembered anything at all about the actual delivery.  So she got them... finally.  A day later than I had planned, but still in time for our anniversary, which is a good thing.

Posted in Me & Mine, Vacations & Holidays | Permalink | Comments (9)

Turn the clock to zero... we're starting up a brand new day.

Oct 12
Prepare for another episode of "Geek on a Soapbox" brought to you exclusively by iPod with video. Yep, you read correctly. Apple's "Special Event" has happened and the new line of iPods is what we have. And they are video...
Next Post

You and I... defying gravity.

Oct 14
Wicked I have never written a review of a theatrical performance, live concert, or performance art before. However, I was so moved by Wicked last night that I felt the need to talk about here in a bit more detail...

Congrats man! Have a good time at the show and game.

They should rip the Vikings the new one. They're weak this year!

Congrats! Four years is fantastic, and maybe it's because she wants you to enjoy yourself (telling you to go to the game) and you feel bad (respecting her and her family) that you guys are still so happy. At least partially. In any case, way to go and enjoy yourselves!

Congratulations Kevin! You sound like you are very happy, and I am happy for you!

How was Wicked? I kept hearing rave reviews all summer and really wanted to see it. Is it as good as everyone says?

I can't believe it has been 4 years already! My how time flies... Congrats!

To all - thanks for the anniversary wishes. We appreciate them.

Johnny - I'm hoping they win, but the entire NFC North sucks this season. Who knows what the heck to expect.

Sandra - I know she just wants me to have a good time. But I still feel guilty. I feel this way because this is the second family function I'm missing in less than a month. The first was my wife's cousin's wedding because I was in Florida (but for my Nano's 80th birthday, so it's more than excused). But this one is for football. So I feel terrible.

Allison - Yep. Hard to believe for us, too. How long now for you and Scott? At least six, isn't it?

Happy Anniversary, you two! It's good to see another couple so happy together (hey, isn't that a song title?).

P.S. Have you seen The Incredibles, Kevin? Wallace Shawn does one of the voices!

Oh yes I have seen The Incredibles. He has a voice in four out of the six Pixar film's that have come out. Much like John Ratzenberger (Cliff Claven from Cheers) who is actually in every single one of them.

Trivia: John Ratzenberger was also in The Empire Strikes Back. He fought for the Rebels.

As for the song... yes, it is one. And now I've got that damned Golden Grahams commercial jingle stuck in my head.

"ooohh that golden honey and graham cracker taste of Golden Grahams.
Grahams and honey... so happy together."

Yeah, I knew it was. That's our other wedding song. Up the aisle to "Get Together," back down to "Happy Together." We're old hippies, what can I say?