Through the tears that I have cried... 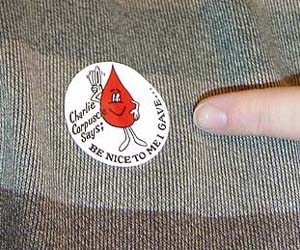 Be proud of me, for I did my iota of civic duty du jour and donated blood.

And there was much rejoicing... yay.

Actually, I've been a pretty regular blood donor since my freshman year in college, which was really the first time I ever had the opportunity.  Anywhere between two and four times a year depending on how often they would let me in the door or in the line at whatever blood drive was being held at school or work.

However, for the past couple years, I've been a bit lax on my donating regularity.  Dunno why, to be honest.  I just haven't done it.  Maybe it's the annoying, pestering phone calls I received on a semi-regular basis from my local blood bank.  They have my name and number on file and, damn, they're not afraid to use it.

I want to feel like I'm doing this out of the goodness of my heart (there's an oxymoron if ever I typed one) and not have it feel like some obligation.  And trying to schedule a time to donate with a place that closes at the same time I get off work just doesn't... well... work.

I realize that in this time of national tragedy (read: our recent cluster of hurricanes), I should be worried less about how I feel about doing something and more concerned with any method by which I can help.  And I likely would have donated if I'd received another call.  But it's actually been a few months since a call came through and I just plain forgot.  C'est la vie, I suppose.

But, I was the one that posted the information about this blood drive on the Web site here at work, so there was no way for me to not know about it.

And I actually remembered.

And I have photographic evidence of it as the media relations director in my office snapped this shot of me laying on the cot getting ready to be stuck with that needle.  Yes, I was reading.  Is that so wrong? 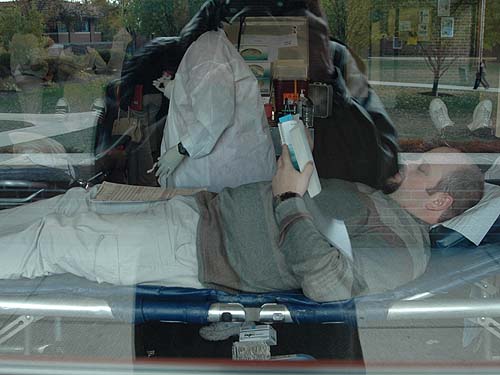 Oh, hell, this could just be me attempting to fall asleep during my lunch break for all you know.  So, you'll just have to take me at my word.

As for the post title... not the most appropriate song lyrics, per se.  But I figured that any song by Blood, Sweat and Tears would be appropriate as I have now officially shed all three at work.  Heh.

You're a better man than I. If you look under my latest post, needles are something that I loathe.

Give some for me next time.

You're a better man than I. If you look under my latest post, needles are something that I loathe.

Give some for me next time.

Have a good weekend.

Good for you! I have given blood twice, and passed out twice, so that ended my attempt at civic duty. But really, all those IV drugs I did in the early 80's pretty much rule me out of donating anyway.