Turn the clock to zero... we're starting up a brand new day.

Prepare for another episode of "Geek on a Soapbox" brought to you exclusively by iPod with video.

Yep, you read correctly.  Apple's "Special Event" has happened and the new line of iPods is what we have.  And they are video enabled.  In fact, the entire line of iPods up to this point no longer exists.  As per the Apple Store, we have the iPod Shuffle, iPod Nano, and the new iPod.  They're not even differentiating it by calling it the "iPod Video;" it is simply "iPod."  And that is that.

One of the strange things about this new model is that they appear to have taken a liking to the purely flat-faced design of the iPod Nano and carried that over here.  Check it out at right.

It's quite a stunning design, all told.  I was afraid that the incorporation of video would require a much larger screen thereby throwing the aesthetics of the iPod's proportions into a state of flux.  Alas, they did not.

The screen does stretch out a little bit, but not too terribly much.  And it looks as though the click wheel is much smaller, relatively speaking.

But what I find truly amazing is that this new player, they claim, is capable of holding over 150 hours of video.  What resolution the video must be in to fit within the 150 hour time frame is beyond me at the moment.  But you must think of it in relative terms... you will have a much smaller video than that which you would be watching on your TV.

But it also looks as though the iTunes Music Store will now be carrying video that you can download to your iPod.  Anything from video podcasts and short features to full episodes of TV shows like Lost.

Okay, I am drooling a little bit.  It is cool and is, once again, going to revolutionize the portable audio/video market much as Apple has been doing all along.  It is not the first portable video player, but it may as well be the last.  For whatever reason, no one seems capable of competing with Apple in this market.  They try and try; yet they fail and fail.

The iPod is the one Apple product that appeals to anyone and everyone regardless of preferred computer operating system and computing ability.  It knows no boundaries.  And it's just getting more popular every day (oh yeah, sales figures for iPods are pretty encouraging as well).

For your drooling pleasure... 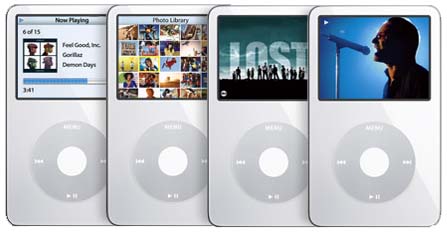 Oct 11
After work last night, I headed over to Lowe's to pick up another gallon of paint for our stairwell (time for coat #2) when I encountered what I thought was one of the most generous displays of employee relations I've...
Next Post

Oct 13
First things first... happy fourth anniversary, Kate! Yep, four years ago, today, Katie and I were married. I know I say this each year, but how she continually puts up with my antics year after year is beyond me. I'm...

Believe me... so do I. This is the first new iPod in a while that has truly impressed me.