Well, more specifically, the Chicago White Sox are the champions... er... my friends.

Finishing out a season in which everyone was convinced they would eventually roll over and die like a fish caught on dry land, the White Sox have won the World Series.  Were there some controversial calls?  Yep.  Did the Sox catch a ton of breaks that they probably should not have?  Yep.  But do they still deserve it?  You betcha.

So my sincere congratulations (and my envy) go to Sox players and true Sox fans in the world.  It's been 88 years.  Have some fun with this. 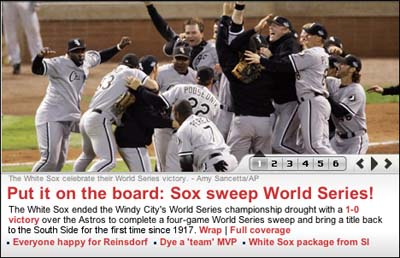 The heat is now on for my Cubbies.

Before these last couple of seasons, they had fallback excuses.  Any time they failed to do well in the regular or post season, they could always just say "wait until next year" and point to their fellow perennial losers, the Boston Red Sox and the Chicago White Sox.  And, for some reason, we fans would accept that.  Not anymore, guys.  They both have won World Series titles and swept their way to it, no less.

"Lovable Losers" just ain't gonna cut it anymore.  There are no excuses left.  In my mind, right now, you're just "losers," plain and simple.  Stop blaming the goat and Bartman and just play.  And you'd better do it soon.  I get the feeling that my fellow Chicagoans' patience is going to be running quite thin this next season and you might see some defection.  The "Friendly Confines" had damned well better become the place where opposing teams come to die.

At least it's nice to see one Chicago team playing baseball.  Dunno what the Cubs were playing this year, but it certainly wasn't Major League-caliber baseball.  I'd venture a bet that our local minor league team, the Kane County Cougars, could have a field day on the Cubs.

Oh, and I'm still working on my Halloween meme and it will come out later today.  Don't think I'm using this as my only post for the day.  Yep, it will be another multipost kind of day here at Kapgar.com.  Woo hoo!

Oct 26
I think I'm going to tackle a couple of memes in the next post or two. Nothing that I've been tagged with, but ones that I've either read on other blogs or am going to develop on my own. I,...
Next Post

Cause to me everyday is Halloween...

Oct 27
This is it, folks... The All Hallow's Meme. And please be honest in your answers. We're all friends; we won't report each other to their respective authorities. I'll list all the questions first, and follow up with my own answers...

Now the Reds need to win another one. It hasn't been so long, but 1990 is still quite a while.

Holy cow, you're HARSH, Kev. Not only are you demanding the Cubs play baseball, you're insisting they WIN. Isn't that setting unreasonable expectations? ;>)

Help me out with something. 1984. I worked for a Tribune Co.-owned newspaper, and they gave us a bunch of tickets to a ballgame between the Cubs and the Padres. I won one pair, and it was the only pro ballgame I've ever attended. I could have sworn it was a World Series game. No? Maybe a playoffs game? I just remember it was a HUGE big deal here in San Diego, and I still have the T-shirt ... somewhere.

And, yes, that is asking a lot. But considering the roster the Cubs have had, they should be more than able to pull it off. Overall, they've got a better lineup than the Sox.

That shirt will be worth some money.