I've got the power!

I think Papa Nicholas and the Lord Almighty both really want to make sure that I'm in the mood this season.

It's no secret that Christmas is not my favorite holiday (that honor goes to Halloween); but I don't particularly dislike it, either.

However, these past few years, I have found it increasingly difficult to enjoy the winter holiday season.  It just doesn't "do it" for me anymore.  Know what I mean?  Sometimes it's just the fact that you're getting older and the mystique is gone.  Or it could be how sick we all get of dealing with crowds both in stores and on any road within a two-mile radius of these stores.  There are so many reasons why this time of year can easily be relegated to "bah humbug" status.

Last year was the worst, until the actual day of Christmas, that is.  Katie and I were in midst of moving and were so caught up in all that hubbub that we were never able to decorate.  Hard to get in the mood when all you see in your home are cardboard boxes everywhere and not a single decoration.

Of course, much of this was made up for by the fact that I woke up on Christmas morning to snow on the ground.  According to Katie, I was acting like a little kid in a candy store.  Too bad these sentiments weren't with me the entire season.

This year, on the other hand, is already turning out different.

We've had several small snowfalls already which do more than their fair share to get me in the mood.

Plus, we had that perfectly timed snowstorm on Black Friday down in Chicago as we awaited the lighting of the tree in Daley Plaza.  I was singing Christmas carols for two days after that happened.

Now it seems as though Santa and Jesus are endowing me with the power to control the weather.

Yep, you read that right... I'm a proxy Mother Nature.

Allow me to explain...

I woke up this morning to a little bit of snow on the ground.  Nothing too big, but enough to coat the grass in white.  But the snow had stopped entirely by the time I woke up.

After my shower and getting everything ready to go for work, I jumped on the iMac (much more figurative than literal, thank you very much) and went to the iTunes Music Store to download Depeche Mode's "Just Can't Get Enough," which, quite surprisingly, I didn't already have. 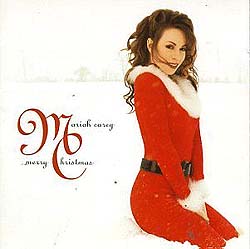 While there, I checked out the iTMS Top 25 and saw that Mariah Carey's "All I Want For Christmas" was #2 on the chart.  It had been quickly rising up the list since Thanksgiving and it was amazing to me that a song that was more than a decade old was doing so well.  That, and I couldn't help but wonder why she was singing that stupid song from my childhood about the toothless kid who has nothing better to ask for as a gift.

I clicked on the name of the song to listen to the 30-second sample and realized it's not about teeth, but it's the same song that little girl sings in the talent show scene of Love Actually.  I love that song, actually (sorry, just hadda).  So I clicked the "purchase" button.

As soon as I clicked it, the snow started to fall in a torrent that lasted several minutes and served to make driving completely unbearable.  I was skidding everywhere on my way to work, but was oh-so-happy to do so.

So, you see, I can create snow by purchasing Christmas songs on iTMS!!  That is Santa and Jesus' dirty little secret!!

And, I'm assuming that the severity of the snowstorm is controlled by how fast the beat of the song is or maybe how much it rocks.

Using that rationale, if I want a snowday off from work, I need only purchase something from the Trans-Siberian Orchestra or, maybe, "Last Christmas" from Jimmy Eat World.  The possibilities are limitless.

Time to play with nature...

Let your body do the talking...

Nov 30
And that's exactly what Dave Gahan did. The man strutted, he crooned, he sauntered, he practically made love to his microphone stand. And he, as well as the rest of Depeche Mode, were on fire last night. The DM portion...
Next Post

Can you picture this?

Dec 2
Key Wester If you're ever in the western Chicago suburb of Naperville, might I recommend a cozy little restaurant? It's called Key Wester and it's a seafood place that is just spectaculah. Okay, "cozy" is not the right word as...

Kevin, you are really starting to piss me off. One more post about your snowy weather while we BAKE in SoCal and I may have to quit reading.

OK, not really. But seriously, do you think that iTunes trick will work for me???

I am ripping Christmas music onto my computer as I type this! It snowed about 5 inches here last night. I was up until 5am working, and I watched the snow slowly fall from the sky. It was gorgeous!

There is hope for you this year, I can tell! :) And silly, don't go to the store, order things online!

SJ, the fact that you "chose" to live in SoCal is not my fault. You opted to live there and forego any hopes of a white Christmas. Your fault. nyah nyah.

I don't think you should bother with the iTMS trick. I don't think even Jesus and Santa can help it snow in SoCal.

Kilax... Go to the store? Me? Are you on drugs? Heck no! I'm buying all this stuff from iTMS. If it weren't for the fact that Katie and I still have to do Christmas shopping, I would be avoiding stores like the plague until February. Can't order gifts online because, by this time of year, they never arrive on time. I got screwed trying to order a Christmas gift online a couple years ago for my brother. Never arrived. I won't do it again during the month of December (or even late November for that matter), just not worth the headaches and worrying.