It was a graveyard smash...

I have always been fascinated with graveyards. In fact, they have never, that I know of, been a source of fright for me. I live for the serenity, the beauty, the photography. I even like visiting them at night.

I think my brother knows of my love for cemeteries and, therefore, has been trying for years to freak me out regarding them. This has led to him suggesting a few times over the years that we visit so-called "haunted" cemeteries in the area.

The concept of a haunted cemetery amuses me a bit. While I believe in spirits and ghosts, I'm not sure I actually believe that there is such a thing as a haunted cemetery. I mean, why haunt a place that most people fear visiting anyway? Don't ghosts want to make their presence known? Isn't the primary theory behind hauntings that a ghost has unfinished business on Earth? Well, if they have unfinished business, I somehow doubt that it's getting done hanging out in a cemetery (unless they were gravediggers when they were alive).

However, haunted cemeteries make for great stories and some that I'm more than willing to share with friends and family. So, of course, I've been up for going along on my brother's jaunts through Chicago haunting lore to see if I could come up with a couple stories of my own that I could share.

Thus far, we have visited Benedictine University's cemetery once (supposedly, some blue orb will appear in the cemetery) and Bachelor's Grove Cemetery twice. Bachelor's Grove is considered one of the top 10 most haunted cemeteries in the U.S. although I don't know who develops the criteria for rating them.

The results? Decidedly negative. Not "negative" in an evil way; more a "nothing happened" sort of negative.

But we did get some pretty cool photos from our (Katie, Brian, Jen, and me) most recent trip to Bachelor's Grove a couple weekends ago... 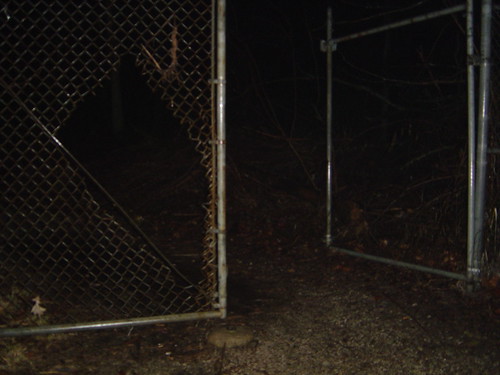 The gate to Bachelor's Grove Cemetery 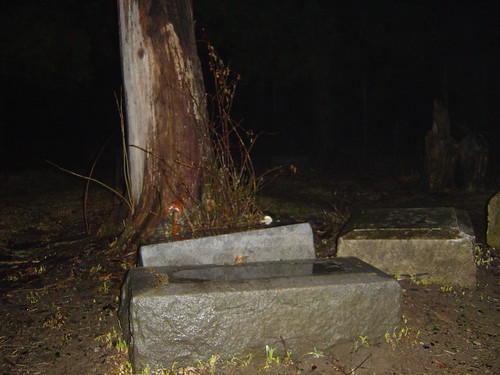 I think the freakiest thing about the cemetery is the fact that almost every tree is barkless. Why? I don't get that. Am I wrong for thinking it's weird? 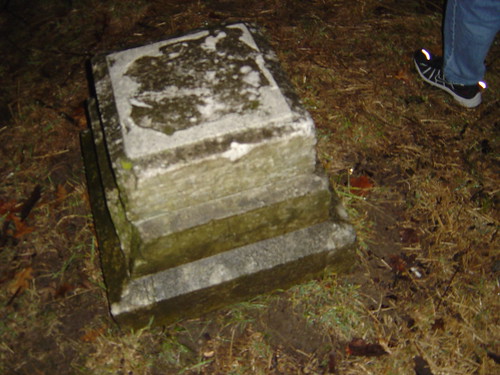 Some of the photos are a bit blurry, but that's due to the sheer lack of lighting. It does add to the effect, though. And this headstone was just too beautiful to not shoot. 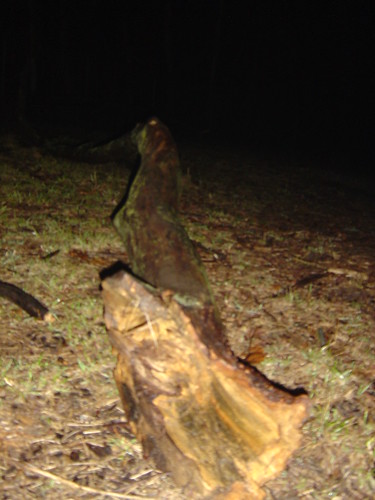 Not entirely barkless, but toppled. The first time at Bachelor's Grove, we encountered a ton of overgrowth and damaged trees. It seems the Parks Department must've cleaned up quite a bit because the ground were pretty wide open save for the occasional fallen limb like this one. 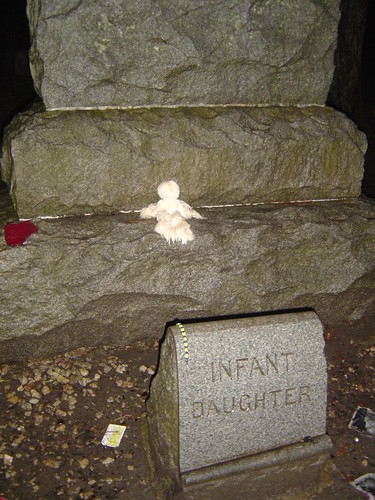 Okay, I take that back, the freakiest thing about the visit was this yarn doll. Creepy. And it would practically glow while everything else was nearly pitch black. 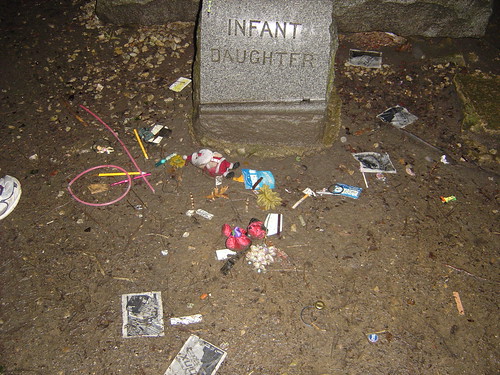 Gotta love the litter. Sad, but eerie as well. Makes you start to wonder what was going on here. 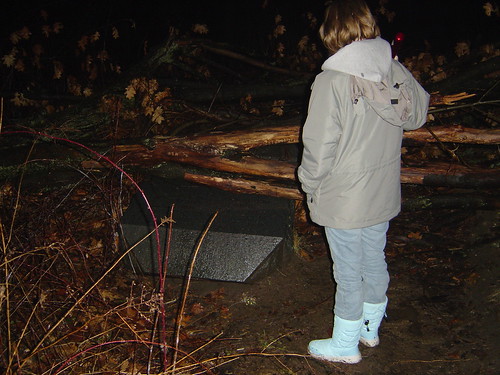 Jen examining another naked and toppled tree that actually knocked over a really large headstone. 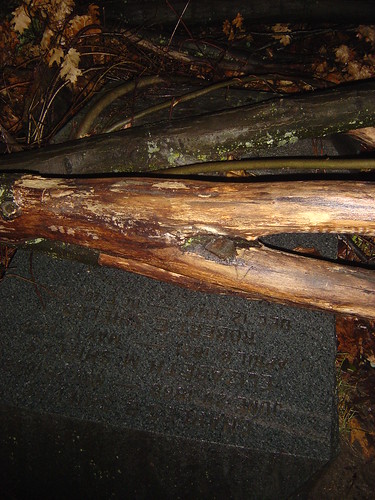 A close up of the toppled headstone.

I really should start scanning some of my old day-time cemetery photos that I've taken over the years and maybe try to get out some more with my camera. There was a time when I was taking cemetery photos on a very regular basis. Of course, that could also have to do with the fact that my master's thesis was about cemeteries.

Posted in Me & Mine, Photography | Permalink | Comments (16)

Mar 23
Well, I thought it might be a cute title considering I'm posting two memes in here. Get it? Mimi=Meme. Okay, maybe it was cooler in my head than it is here. Plus, you have to know Rent to really get...
Next Post

Mar 25
I was watching a TiVosode of The Daily Show from Monday night when they asked a commercial-break trivia question that really disturbed me... The current war in Iraq has been going on since March 19, 2003. That means it clocks...

I, too, have always loved cemeteries, and they are a favorite subject to photograph. The older, the better.

Kevin, you should create a Cemetaries set on Flickr! Great weekend project, no? And speaking of Flickr, there are some wonderful tombstone/cemetery photo groups on there.

the yarn doll? creeeepy. very blair witch. it looks like infant daughter had herself a little graveside party. is it totally sacreligious that i said that?

i love visiting old gravesites. as long as i don't know anyone buried there. otherwise, it's a bit too rough emotionally.

Did you see Buffy and her crew?

You must watch Ghost Hunters on Scifi channel to know of orbs. A former co worker took pics of orbs at a local cementary here that's near the local hospital.

Oooh, I LOVE photographing things in cemeteries. Anytime I'm on a photo excursion, I stop in cemeteries. You showed me yours, now I'll show you mine. ;) One day soon I'll do a cemetery post for ya. :)

What's with this cemetery? Doesn't anyone tale care of it anymore? I've never seen so many toppled trees. If you come to LA, I'll take you on a "Star tour" of Hollywood cemeteries -- Marilyn Monroe, Grouch Marx, etc...

SJ, I agree on the doll. When I get the other stuff scanned, maybe I will. Right now, there's just not enough for it.

Sizzle, very creepy. Not at all sacreligious. It's a Dead Man's Party... who could ask for more?

Alissa, there were some people toting a lot of wood coming in as we left. I assumed they were building a campfire.

Mikey, nope, no Ghost Hunters. I've heard of orbs many times in the past.

Johnny, I'll find some good sites for you. It's been so long since I"ve told many of them that I cannot remember. Try Googling "Resurrection Mary"... that's a good one.

Chase, I can't wait to see them. I've gotta find my old stuff as well.

Neil, it's just your good, old-fashioned rundown cemetery where people are no longer allowed to be interred. Actually, the walk up to it is quite interesting. There is a park district parking lot across the street (Midlothian... a very busy road). But, being the middle of the night when we went, the parking lot was blocked off and we had to park in an electrical substation and walk through the mud to the broken down access road (all the concrete was broken apart if it even still existed) and walk back a couple football fields worth of mud to the broken-down gate you saw in the photos. Nope, very little maintenance at all. Cemeteries that are still being used are well maintained.

I've taken my share of cemetary photos as well. I like the old, tall, ornate, distinctive, as well as the geometry of rows when tombstones are more uniform.

When I'm in a national cemetery such as Arlington, I expect uniform, perfect rows of headstones. And you can see the perfect rows from two different angles. It's incredible in its simplicity and beauty.

But when I'm in a regular, everyday cemetery, I'm not sure what I expect. Maybe it's the lack of expectation that I most enjoy and appreciate. You can find just about anything. One of the first cemeteries I ever visited, Lexington Cemetery in Kentucky, had a statue of a young boy named Emil who had a baby bird in his cupped hands. About ten or so feet away is the rest of the statue which was a tree trunk with the birds' nest sitting on top of it. Some of the cemeteries in DeKalb, IL, have grave circles in which you have one large headstone with a family's last name on it and all the individual headstones form a circle by it. I love that kind of design creativity.

I went to Bachelor's Grove once four years ago. It was during the day and there were a lot of people roaming around with those devices you see on television that are supposed to be able to pick up paranormal activity. Here's a link to the photos I took: http://snapshots.perfectpixels.org/2001/20011027-bachelors_grove/

Those are great photos, Nicole. All of my non-digital, SLR photos of cemeteries are in black and white. It really does add to the effect. That walk up to the cemetery is beautifully photographed. You can't see any of that at night. I'm going to recode that as an active link if anyone else should want to visit them...

I don't know if that graveyard is creepy, or just run down. It looks like it is in awful shape!

I think it's a little of both. Of course, disrepair could potentially make even Disneyland a frightfest.

I've been to Bachelor's Grove two times. It most definatly is "haunted."

Maria, I'm glad you experienced something. All I got were some weird adornments to the headstones. What has you convinced it's haunted?