Home Archives Profile Subscribe Links Rankings
I want to know what you're thinking...
I just made you say "underwear"...

Break on through to the other side...

For the first time since 2001 (with the release of Jay & Silent Bob Strike Back and The Others), Katie and I saw a "double feature," per se, at the movies. We went with my brother and future SiL to see a deuce of films last night. Actually, it wasn't intended to be a double feature. Our initial plan was to just see The Da Vinci Code, and we did just that.

How was Da Vinci? Meh. Sorry, that wasn't entirely fair. It was an okay movie and it might've been better if we had never read the book before in our lives. Emphasis on "might."

On second thought, even as a standalone flick, it was only remotely decent, at best. The plot was convoluted and really lacking in clarity and believability. And, damn if it wasn't boooooring. Sorry to burst your bubble if you're planning on seeing it. But I was having a lot of trouble staying interested. Oh, and for the record, I agree with Brandon's take on the film vs. book interpretations of the character of Sophie Neveu. Actually, we all did. It became one of our major points of discussion.

After we left the theater, we stood outside debating the "finer points" of the film. We were standing out there for well over 15 minutes discussing it in the hallway. That's when we all decided we needed to make up for this experience and discovered that there was a showing of Over the Hedge in about 20 minutes. 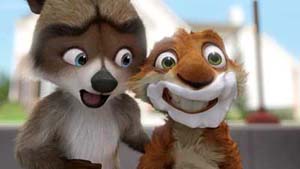 Since we all had been wanting to see it, we went for it.

Now Hedge was a great movie! This was easily one of the best animated films I've seen in years. Hell, it was one of the best comedic films, period, that I've seen in years. I can't remember the last time I laughed this hard at a movie. The characters were well developed, well voiced, and there wasn't a single scene that wasn't completely engaging and entertaining throughout the movie.

It was also some of the best computer animation I have ever seen. This is the first time that I have truly seen a film from another studio that can compare to the quality of animation that comes from Pixar. The only outside film, prior to this, that could compare to Pixar films was Shrek, and Hedge even put that to shame.

Prior to seeing it, I wasn't sure how I felt about Bruce Willis being in the starring role; but, after actually seeing (well, "hearing") him, he was brilliant. His voice has such character and he brought R.J. the Raccoon to life. But the best was Steve Carell, of The Office, as Hammy the Squirrel.

If you can see only one movie this summer, so far, let it be Over the Hedge.

I'm really looking forward to seeing this one! When I heard Bruce Willis was voicing the main character, the first thing I thought of was "Look Who's Talking." I thought he was wonderful as the voice of Baby Mikey. And if you say "Over The Hedge" is Pixar-quality, that doubles the appeal for me.

I'll probably see Over the Hedge, it looks like something I'd enjoy. Went to see Da Vince Code, and it wasn't bad, I mean, I didn't want to flee the theater. I did enjoy it for what it was, but, like you, I read the book and the book was just plain better. Tom Hanks - not the best choice for this role.

I'm with you on Da Vinci. Saw it, fell asleep through parts of it. My wife though really enjoyed it. She's never read the book, which may explain things.

I decided I was going to skip "The DaVinci Code" weeks ago after reading so many horrible reviews. Last I checked, rottentomatoes.com had a cumulative critics' rating of 18% and that's pretty damned bad. I never go by any one critic's review, but Rotten Tomatoes averages them all out, and that's rather telling.

I'll have to see "Over the Hedge," though. The Bruce Willis thing kind of turned me off, I admit. He hasn't been truly great since his days on "Moonlighting," in my opinion.

I went to see The Da Vinci Code yesterday. G.I. Guy had been wanting to see it, so naturally I agreed. I hadn't read the book so I didn't really know what to expect. I was just happy to be seeing a movie. Except . . .

On my BEST day, my attention span (though strained) can last MAYBE about 90 minutes. The movie started at 1:30. We left the theater at 4:15.

Torture, I tell you.

I had a little Da Vinci Code review on my site - pretty much the same synopsis. Boring if you read it - probably confusing if you did not.

And X-Men 3 was BAD! I saw it today. Boring boring boring. I had high hopes for fun and I was let down :(

Went to the movies with my baby Bro to see M:I 3 yesterday and Over The Hedge was one of the trailers... We both agreed to stick it on our lists.

I'm thinking there may be Over the Hedge viewing in Nico's future. Thanks for the review. As for Da Vinci... well I haven't read the book, so all the fuss is a bit beyond me I must admit.
N.

Cool, my son is bugging the heck out of me to take him to see it. I can't wait!

Dammit Kevin, now I'm going to have to go see this tomorrow! That will be three movies in three days! (Saw X-Men 3 today ... it was ok I guess).

Ok, I saw it. I thought it was cute and enjoyed it, but I have to say I preferred Shrek or any Pixar film.

SJ, we had forgotten about Look Who's Talking. Not a great movie, but Bruce's voice made it better than average. Coulda done without Travolta and Alley, though.

Eve, I will definitely have to read this. Tom Hanks definitely not the best choice. I still see Sean from Nip/Tuck in the role.

jackt, while I didn't fall asleep, my head rarely left its roost on my hand which was propped on elbow on the armrest. There was very little that actually excited me about it.

Karl, definitely give Hedge a shot.

Rabbit, at times it definitely seemed that way, didn't it?

Kilax, was X3 that bad? What did you think of the first two in the series?

Nat, if you haven't read the book, check it out. Not the movie, though.

Nicole, only okay on X3. Both you and Kilax didn't seem particularly impressed. Bummer.

Nicole, Katie and I were debating that the other day. We did like it better than Shrek and better than one or two Pixar films (most notably A Bug's Life). But it was hard to put it ahead of such other faves as, say, Monster's Inc. and Finding Nemo. Hard to compare them even if they are all animated, you know?