After the visit with both sets of parents yesterday to celebrate Mother's Day, Katie and I returned home hoping for nothing more than a relaxing evening of some minor decorative work around the house, cheap pizza, and catching up on some TV shows.

While the first two items on our agenda would've easily complemented our desire for relaxation, the final one most certainly did not. In fact, for the most part, we were on the edge of our proverbial seats (hard to really be on the edge, per se, when we're laying in bed).

Wow, when did Desperate Housewives actually decide to become worthwhile? Last night, we had to watch two episodes because we never got around to watching the one from the week before. And both, believe it or not (I'm still not sure I believe it), were actually pretty good. Over the top? Yes. But that's what we've come to expect from D.H. when it's actually good. Otherwise, it's nothing more than poorly written tripe.

Then, of course, there was the first hour of the three-hour, two-night season finale to Grey's Anatomy. 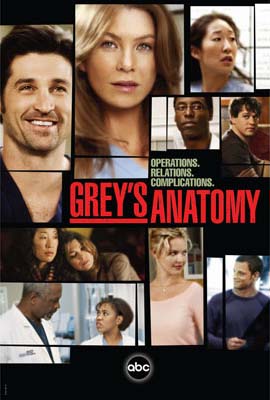 Here's the coversation Katie and I had immediately following the show (I have eliminated spoilers)...

Katie: "I can't watch it tomorrow!"

Kevin: "You can't stop now. It's going to be really good!"

Katie: "But I don't want to know how it turns out."

Kevin: "You've been watching all season, so far. Why would you not want to see how it ends?"

Katie: "If I don't watch it, then nothing bad can happen."

Kevin: "It'll still happen, you just won't see it and then you'll be confused when next season starts."

Kevin: "It's going to happen whether you want it to or not. So you may as well just watch it."

Well, for what it's worth, I sure as hell will be watching it.

Santa Claus is coming to town...

May 14
Okay, maybe not Santa. But this has the potential to be so much better! Anybody going to be in town on June 3 who would be interested in joining us? Katie and I will be there. Jenny's coming. And there...
Next Post

May 16
Since I'm not exactly feeling inspired at the moment (ironic considering I just proclaimed how I rarely struggle for a post topic... go fig), here are a few notes. New Music As sad as this sounds, I still have to...

Another show I don't watch. I remember why I don't watch it, too. This was a mid-season debut, which totally took over the "Boston Legal" time slot on Sunday nights. It pissed me off that "Grey's Anatomy" swiped "Boston Legal's" spot, and even left "Legal" with six or seven unaired episodes from that season (which carried over to the next season). So I boycotted "Anatomy," hoping that ABC would return "Legal" to its rightful location.

They didn't. I'm still pissed. Aside from "Extreme Makeover: Home Edition" there isn't anything I watch on Sunday nights.

Ok, you know how I bust your chops about all the freaking tv you watch? Well, last night, I actually found myself watching this. It's one of Shellie's shows, but I just happened to be paying attention this time.

I screamed at the end, too. *gasp*

I will be watching the finale. Dammit.

Good show last night. It was a lot better than the Saprano's episode I watch at 8:00pm. Desperate House Wives has become way to ridiculous. Can't stand to even see one of the actors on a commercial let alone a TV show. Teri Hatcher on those Clairol commercials? AHHH! Like she uses a store product to do her hair. That is ridiculous!

How can Kate watch 24 every week and then say she can't watch the last episode of Grey's? 24 is more tense than Grey's. Tell her to suck it up and watch!

Sounds like me having a conversations with my ex when Battlestar Galatica is on!!

I always love reading the dialogues btwn you and your woman.

i think i am going to have to start watching grey's. everyone with any taste watches it!

Dude! I know. I'm so glad I don't have to wait a whole week for it, though I have some strong suspicions about what will happen.

Please tell me you didn't forget VM last night. I hope your TiVo grabbed the finale re-airing for ya.

Karl, I know many people who were ticked about BL being usurped. But GA is very worth your time.

MIM, Katie just doesn't want to know how it turns out.

Mikey, I've heard that BSG can be equally as addicting.

Jacquie, thanks. And 24 is another one we are dying for each week.

Sizzle, you betcha! Tune in!

Claire, it is very nice to not have to wait. But I just fear that some people who weren't paying that close attention to the details may forget. Yes, I did get VM the second go round. I hope to watch it tonight.

Be warned that the President has an address tonight so that may throw off things if you're TiVoing.

BASTARD! At least I'll be home so I can figure things out for when Katie gets home from work. What time? This is going to piss off the networks and fans immensely.

8-8:30 is what the listing I looked at said. They're actually showing last night's GA ep again at 8, but it's getting cut in half by the address.

I just don't want it to cut into the finale of HIMYM.

Get ready. Now that a former Fox guy(Tony Snow) is the White House Press Secretary, Bush will be cutting into a lot of programs in the future. If and only if the networks give him the time. Some regular networks might not give him the air time. Most of his speeches will be on cable news.

Claire and MIM, this is just crap. I don't want it cutting into HIMYM or Grey's Anatomy. And, sadly, I'd rather watch CSI: Miami than our president.

If he keeps screwing up networks' schedules like this with his incoherent BS, it's likely they'll give him less and less time. They don't want anything pre-empting their season finales. This is May Sweeps. The ratings here determine their advertising income for the next season. There's no better way to lose viewers than to pre-empt season finales with our dipshit of a president. Why does this reek of bad PR effort to save face? It's just going to backfire.

It's supposed to be about immigration legislation which I am interested in, but I'm not sure I can make myself watch him.

"I'd rather watch CSI: Miami than our president." Miami has been so bad this year, I stopped watching; nonetheless, I think the same is true for me. Guess I'll just look up a transcript later on.

I don't want to hear about what he's got to say at all. Apparently he may talk about deploying troops to the U.S./Mexico border. Great. Not that our military isn't already spread thin as a result of his Crusade.

Nothing EVER stands still on that show. It makes me surprised that it hasn't been cancelled yet. :-)

That would be the M.O. of all the big four networks anymore. Keep the crap, can the quality.

I'm gonna watch tonight, to see what all the fuss is about.

I remembered to watch "My Name Is Earl" the other night. Unfortunately , I remembered at 9:00, so only saw the last 20 minutes. Even so, that "runaway ticket" sequence was brilliant! And Ethan Suplee, although considerably slimmed down, is just as adorable as he was in "The First $20 Million." I've added this to my summer TV schedule (to catch the reruns!).

That was a pretty good episode overall. And it's definitely worth your time over the summer. Plus, I think the DVDs will be out in August or September.

I felt completely emotionally drained after watching it on Monday! Completely!

The Sunday episode definitely drained me. Monday's episode... not so much. Sunday would have been a much better season finale.