Well there's floodin' down in Texas...

It is my firm belief that Texas must be the fattest state in the entire United States of America. Oh hell, it's probably a safe bet that it's one of the worst areas of the world.

I make this claim having never set foot in the state before in my life. And I'm pretty sure that after making it, I will never be welcome there, ever.

But I also make this claim with the utmost in scientific research by my side. Highly objective... thoroughly scrutinized... scientifically verifiable. 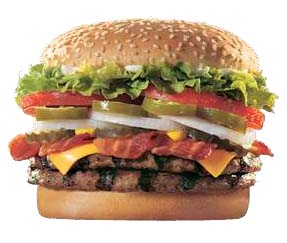 Yes, my claim is based on the naming system used by Burger King to designate their new two-patty behemoth known as the Texas Double Whopper.

No, it's not the worst burger developed in recent years. There have been far worse, in fact. But that does nothing to take away from the heart-attack-in-disguise status of this mother of an ex-bovine.

And if Texas is responsible for this burger, God only knows what else they have lurking down there in their heavily protected state recipe files. A San Antonio Super Sloppy Slurpy? Prodigious Padre Island Pancake Patty Melt? Corpus Cristi Crunchy Crusty Cristo?

Yeah, enough of that. My stomach's turning just coming up with those names.

Why did BK decide to sully the image of the Lone Star State in such a way? I realize that when the annual Top 25 Fattest Cities report is released, Texas typically has a handful of cities in the top 25 (four in 2005, alone). But do we really need to denegrate them further? Don't you think they're probably full of enough doubt and self loathing as it is?

But what scares me even more is the fact that I am unable to give you the nutritional facts on this beast. This new burger is conspicuously absent from the downloadable Nutritional Information PDF file on the BK Web site. Whether this is because it is so new or they are afraid to share the truth remains to be seen.

May 25
It was bound to happen some time. If you've ever purchased music from the iTunes Music Store, you're likely familiar with the process: Set up account with your credit card Find the music you want Click "Buy Song" or "Buy...
Next Post

I want to know what you're thinking...

May 27
Stolen from Dave who, in turn, stole it from Neil (not of the Kramer variety; thought I should clarify). What curse word do you use the most? More than likely the four-letter "f" varietal. Although I'm a big fan of...

What did you say about TEXAS??? ~ Sandy the Squirrel from Spongebob.

I also love how McDonalds now has all these commercials with people working out and participating in various sports. It's like, oh, look at that! McDonalds is healthy now.

I'm a sucker for advertising but McDonalds, you aren't fooling me!

That burger looks so good. I'm going to take your posting one step further. America is the fattest nation. Do you know how hard it is for me to buy clothes in small sizes? It took me four stores to find a pair of work paints that fit. I ussally have to go to the boys department.

Texas, Land of Beef and the All-You-Can-Eat-Buffet. Those folks are nuts. Everything down there is HUGE, and you can't talk 'em down.

They're friendly, though. For the most part. My brother lives down there.

Burger King profiled their demographic and discovered that their biggest fans were guys aged like 18-35 or something, who have jobs but aren't particularly into their jobs or proud of them, and don't care about their health. It's really funny how the company is pretty unabashed about trans fats and portion sizes- a direct result of knowing their customer.

Have a good weekend. I'm off to have a Whopper for breakfast.

Oh, great, just what I need. I'll be moving there in 5 months. Though, I'll be living in a richy part of town...better snobby than fatty, right??

Eating is such a regional thing. California was so health- and weight-conscious. Out here in Georgia, everything is fried and covered in gravy.

Jacquie, it does look a bit nasty, doesn't it?

Mikey, it's all yours.

Tracy, "everything" is huge? I'm scared.

jackt, and yet that age group (my age group) should be concerned. Ironic, isn't it?

Chase, your welcome wagon basket will be loaded with those, you realize that, right?

Bec, I probably shouldn't ask, but call it morbid curiosity.

SJ, you and Mikey anyway.

Blech! I ate lunch before I read this posting and that was a bad idea. How much crap can you pile onto one hamburger? Jeez, and we wonder why we're the fattest nation. Disgusting...

Funny, I just saw the Texas Double Whopper here the other day. I'd seen it for years when I lived in Texas, of course. I just always figured that Burger King named burgers after whatever state they were in. You know, like in Mississippi they had Mississippi Double Whoppers and in New York they had New York Double Whoppers. (You probably got the pattern by now.)

i feel kind of sick looking at that burger.

Texans full of doubt and self-loathing? You're joking right? I think "Don't mess with Texas" conveys their attitude pretty well.

Anyway, I bet you'd like Austin. You could even eat vegetarian there if you wanted to. I still fondly remember seeing Satan's cheerleaders at the Black Cat Lounge- they were a real kick.

Texans full of doubt and self-loathing? You're joking right? I think "Don't mess with Texas" conveys their attitude pretty well.

Anyway, I bet you'd like Austin. You could even eat vegetarian there if you wanted to. I still fondly remember seeing Satan's cheerleaders at the Black Cat Lounge- they were a real kick.

Elaine, did you ever see my Chicago-style hot dog post? Now that's nasty!

Karl, Illinois Double Whopper was just far too pansy a name. They decided to go with Texas across the board. Especially with the failure of the Delaware Double Whopper. BOMB!

Sizzle, you're not the only one.

Claire, well, not normally full of it. Just thinking that this sort of marketing might have an effect. Or, perhaps they're just planning their own Alamo styled attack against BK headquarters as revenge.

Umm...do I even need to leave a comment on this? No, I don't think so.

Way to kill America, Burger King. Thanks for all that convenience.

Texas - the home of Presidents George Bush and Lyndon Johnson.

It's like a heart attack on a stick. Except without the stick.

I spent one summer in Harlingen, Texas (the Southern, southern tip, near Brownsville) and I ate like a pig. In the morning we would have breakfast burritos, at lunch BBQ or Mexican all cooked with lard, for dinner ballpark food like sausage tacos, frito pie, nachos and whatnot. And since it was typically 100 degrees with 70% humidity, we did no excercise at all. No wonder I gained 50 pounds. Texas is easily the fattest state in the union.

This whole thing makes me crave salad. Odd... how city's all of sudden become fat. I've noticed it around here lately. Where did people get the idea that eating that much... whatever it is... in one sitting was good for them.

One of my coworkers here in Rome is from Poland, but lived in Dallas for 10 years. On Friday I finally had the courage to ask - "So what do you think about the American weight problem?"

Most everyone here is in shape, except the tourists, so I had to ask her. She said she was shocked and saw the most overweight people there she had ever seen (she was nice when telling me this). I am so ashamed of our fat nation. We need to shape up!

My unlce just died from a heart attach. My mind is definitely on my health now.

Eve, yeah, you and Dave definitely do not need to comment considering your stance toward meat in general.

Sandra, but we'll need the stick to poke people to make sure they're still alive.

Brandon, ouch, that hurts. I'd just sit outside and sweat it off. But that experience would probably be equally unbearable, eh?

Nat, strikes me as anything but sudden, unfortunately. Been that way for a while around here. Then again, you are up in Canada.

Kilax, I agree. We have a lot of work to do. My parents were just in Paris and noticed the same thing. Everyone there in shape save for us Americans.