Home Archives Profile Subscribe Links Rankings
C'mon, let's get it started...
And you may ask yourself, how do I work this...

You are the talk of the town...

I've received some interesting comments regarding a couple of my recent posts about television and the Prez Bush press conference interrupting shows.

It started on Monday a little something like this...

Claire: "Be warned that the President has an address tonight so that may throw off things if you're TiVoing."

Me: "BASTARD! At least I'll be home so I can figure things out for when Katie gets home from work. What time? This is going to piss off the networks and fans immensely."

Claire: "8-8:30 is what the listing I looked at said. They're actually showing last night's GA ep again at 8, but it's getting cut in half by the address. I just don't want it to cut into the finale of HIMYM."

MadIrishMan: "Get ready. Now that a former FOX guy (Tony Snow) is the White House Press Secretary, Bush will be cutting into a lot of programs in the future. If and only if the networks give him the time. Some regular networks might not give him the air time. Most of his speeches will be on cable news."

Me: "Claire and MIM, this is just crap. I don't want it cutting into HIMYM or Grey's Anatomy. And, sadly, I'd rather watch CSI: Miami than our president. If he keeps screwing up networks' schedules like this with his incoherent BS, it's likely they'll give him less and less time. They don't want anything pre-empting their season finales. This is May Sweeps. The ratings here determine their advertising income for the next season. There's no better way to lose viewers than to pre-empt season finales with our dipshit of a president. Why does this reek of bad PR effort to save face? It's just going to backfire."

Claire: "It's supposed to be about immigration legislation which I am interested in, but I'm not sure I can make myself watch him. 'I'd rather watch CSI: Miami than our president.' Miami has been so bad this year, I stopped watching; nonetheless, I think the same is true for me. Guess I'll just look up a transcript later on."

MadIrishMan: "Maybe that is President Bush's idea. Ratings will be down when he is on and it could hurt the networks. ;) But, to his credit, this is something he should have been doing 4-5 years ago. I cannot remember a President that has spoken on TV driectly to the public less than GW. Just a stat I heard. This was the first time GW has spoken to the country from the Oval Office on a domestic issue. Now how bad is that?"

Tracy Lynn: "That stupid man forced me to miss most of the ball game so that I could watch my shows last night. Bastard. Why can't he prioritize appropriately?! ;-) He did NOT need twenty minutes to say what needed to be said. He could have just dropped it into a commercial space, that would have been way more considerate, and would have allowed me to Tivo AND fast forward through it."

Me: "MIM, I agree he should be doing something far more regularly than just once a year. He's a media troll. Just don't interrupt us and our shows."

But it was Tracy's comment that got me thinking... is there a better way for the President to handle this sort of situation? Is there something he can do to get the information out via the mainstream media and not piss off both the networks and viewers?

And here is the solution that I came up with...

Yes, I agree with MIM that our President is truly lax about press conferences and getting information out in a timely manner. And there's a simple reason for that, he's an idiot in the press. He comes off as a slack-jawed yokel. Your cousin Jethro in a suit. 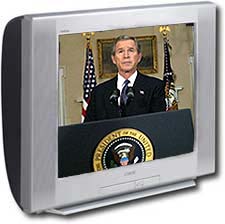 But I'm not here to pick on the President. I do that enough already. I'm here to offer up some simple ideas. I realize it's late in his second term and the likelihood of these helping, or even being implemented for that matter, are slim to none. But I will try anyway.

Suggestion #1:
Never pre-empt nightly television schedules with your press conferences and announcements. Never, ever, ever, never. You anger networks who suddenly need to either push their shows back and run them later into the night or they need to find open time slots to reschedule them to air later.

Fans get pissed, too. This either messes with their viewing patterns or the timers set on their VCRs/DVRs. Don't anger your voters. I know you don't need to care about them anymore seeing as how you're in your second term, but this is a recommendation for future politicians that may have executive leanings as well.

Suggestion #2:
Instead, set up a "commercial interruption." This is something that would air during a commercial break in a show and last nothing more than one or two minutes. In it, you would give a preview of your press conference, announcement, etc., and maybe one or two quick points about it to whet the appetites of those who might be interested in more information. Call it your teaser or cliffhanger.

Suggestion #3:
At the end of the commercial interruption, a list of places to go for more information and to view the actual press conference would be made available.

This list should include a Web site with video feeds so people can watch them. Have an archive of past video feeds so we can reference them down the road a bit or even remind us of what you've said in the past (granted, with Bush, this could be a dangerous thing).

It can also include information about an alternate television channel, one that is not owned or operated by any of the networks or affiliates, but stands completely independent of them so none of them would have a problem putting up this information (no fear of giving viewers to competitors). This channel would serve up these media events as they happen as well as in an on-demand format. Now viewers have the ability watch the current event live or go back and watch it, and others, later. You have control over the FCC, you can make it happen.

Also, make the video and audio as well as transcripts for these events readily available in one place. Provide RSS feeds for these files so we can subscribe to them in our RSS aggregators or with our MP3 player software. We can then watch or listen to them on our iPods. I know not everyone would be interested in this, but some would. And it would also be available to be used as teaching material in schools and universities. I'm sure much of this is already available, but in one place? That's easy to find? With feeds? I doubt that entirely.

I would also recommend a Presidential blog, but even I don't see that being all that great an idea. Talk about your comment and trackback spam. Geez.

With these suggestions in place, you do not risk alienating television programmers or viewers. You can get on the air more often and let people see and hear you and get the information that is "important." You cater to both traditional media fans and those who prefer more cutting-edge technology. You no longer are perceived as the cowardly Wizard hiding behind the protective curtain in his Emerald City White House.

It's a win-win situation, Mr. President.

So what do you say?

Got an opening for a Press Secretary? Media Collaborator?

wow. that is an interesting idea. it relies heavily on the ability of the government to recognize and run with new media however, which is probably it's downfall. but well done!

how about if he just doesn't talk. like, ever again.

that sounds good to me.

This idea totally works for me, because A) it enables me to get any info in the slim chance he's talking about something important and B) I don't actually have to listen to him butcher the English language with his hillbilly talk.

How about we don't have to listen to any presidential bs unless we want to? He should just have his own channel :)

Sorry, couldn't get past that first paragraph once I saw "Prez Bush press conference." Pretty much like Monday's presidential address.

I like suggestion #2. Quick commercial bites is about as much as I can take, thank you very much.

Suze, sadly, that is definitely its downfall. They don't seem to realize they could get a whole new audience interested if they'd just cater to us. The closest we've ever come to a person who understood technology and its capabilities was Howard Dean. Scary.

Sizzle, in all honesty, I agree.

Kilax, the Prez TV station is part of my suggestion. But he still needs to be on the networks somehow or he'd never agree to do it. How else would people know to tune in? I'm trying to be fair and offer up something realistic. As much as I can't really stand him, I'm trying not to berate him in this post.

Elaine, well, that's all I can take, too. But I'm trying to be fair and offer up a suggestion that even he can agree to. And selling this as a package deal strikes me as the best way to do it.

All very good suggestions Kevin. Although I think I like Ms. Sizzle's the best. Did you know the president has a weekly podcast? I downloaded it for 2 weeks just to see what it was like. I would listen to it in the car but the sound of his voice and asinine things he would say made me car sick, so I stopped.

the catch is that tv is all about advertising. The ads are the bit of a show slot they're least likely to cut.

I'm with you and Sizz for this particular prez though.

Nicole, no, I didn't know he had one. And this sort of deal would be a great way to advertise it. There are so many missed opportunities in this presidency.

Claire, yeah, but it'd be pretty easy for them to bump an ad that is lower earning in place of this. Or even get rid of one of their own show promotions. There are easy ways to do it. And this would, I think, make everyone much happier than the pre-empting alternative.

I think I would quite enjoy a presidential blog, if just for the humor factor

Bre, it might be good for a laugh or two. Then you'd just feel embarrassed knowing he's the leader of our country.

Mikey, and that despite his blatant lie about Monica Lewinsky. At least that really only affected three people. A lie that kills a few thousand is something else altogether.

Imagine what presidential addresses will be like when The Governator becomes President ...

The constitutional amendment necessary for this to happen better never evolve. I'll move to Austria, which has disowned him.

I think you're safe. Ahnold's pissed off so many Californians, I think his political goose is cooked. Unless he BUYS the presidency.

Which isn't entirely out of the realm of possibility.

Yeah he shouldn't be messin' with my weekly dose of 24.

That is an absolute cardinal sin. And with Jack hunting down the president on his show (I haven't finished last night's episode yet, so don't tell me what happens... I'm one hour through it), it shows what we, as fans, would be willing to do to our Prez if he pulls that crap again.