Home Archives Profile Subscribe Links Rankings
I just made you say "underwear"...
Four days of the week, she thinks I'm the enemy...

The other night, I had three beers at a bar, and it hit me pretty nicely. Yesterday, however, I had three beers and three mixed drinks at a cookout at my friend's house and felt nothing. Of course, it was 90-something degrees out at 99% humidity and I could barely feel my skin let alone the alcohol attempting to soak into my bloodstream.

The weather was absolutely horrendous yesterday. Those temperatures are no exaggeration whatsoever. Then, in a matter of 10 minutes, it dropped about 15 degrees when the clouds finally added that final degree of humidity necessary and opened up to pour out cats and dogs. Possibly literally in some areas.

Yes, 10 minutes was all the time that elapsed between blue and cloudy skies and an impenetrable grey blanket saturated with rain.

But the storm certainly made for a nice photo op. 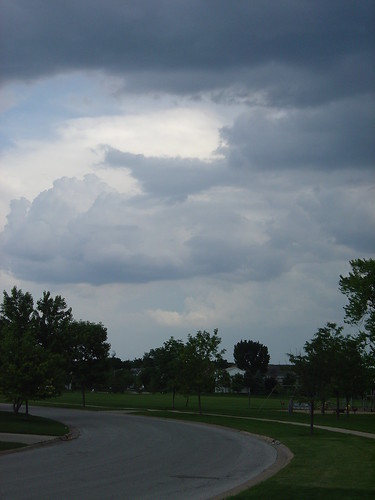 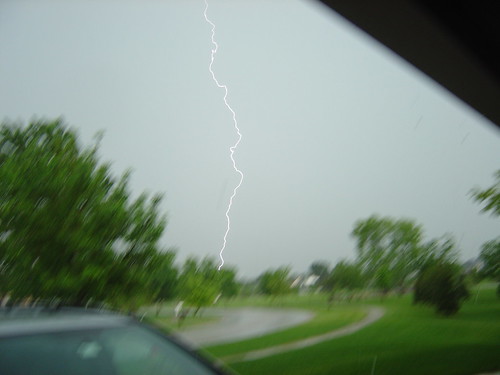 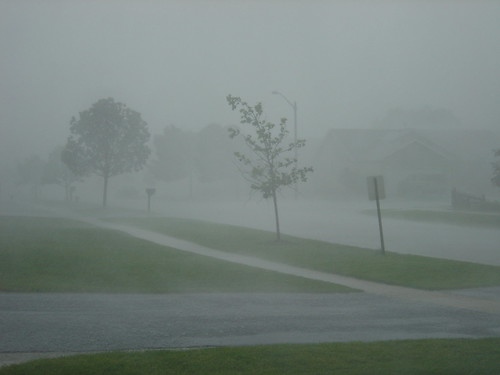 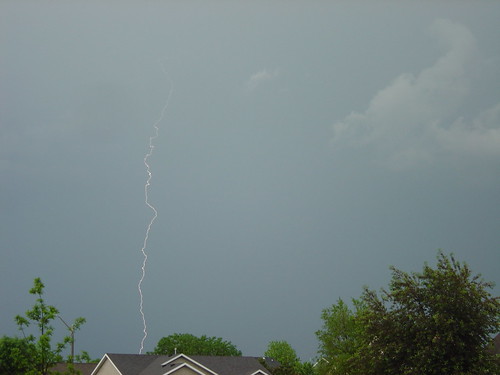 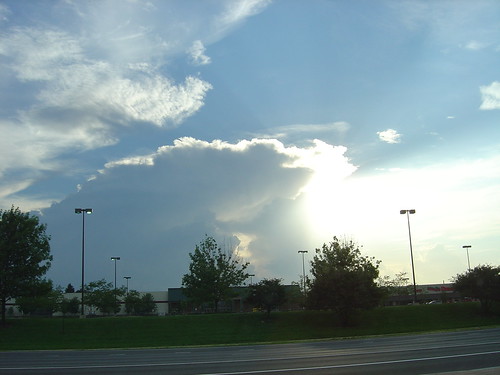 Holy lightning. I can't believe you captured that on camera!

Wonderful pics, K. :) We're supposed to get some of that thunderstorming today. I LOVE storms. That one you took pics of looks like a great one!

Wow, great shots...love the big thunderstorms. So when it dropped 15 degrees in temp did you suddenly find yourself drunk?

Cool pics... I hate storms, but less so now that I don't have to worry about tornadoes(sp?).

Were you eating at the bar? If not, that is why there was a difference.

mmmm. i love thunderstorms. especially the seemingly random ones that come from nowhere and leave as quickly as they arrived.

That lightning picture scared the bejezus out of me. On a lighter note, I noticed much of the same this weekend - usually after 3 or 4 trips to the keg, I'm quite giggly and even more flirtatious than normal. Not so much this weekend, it was too hot!!

those pics are awesome!

glad you didn't get struck.

wow that looked like a storm that would be right at home in Malaysia! very kewl pix, btw :-)

That's a beautiful storm. I love lightning and, as a child and still now, have been known to dash outside in it. Those are amazing photos.

jackt, got pretty dang lucky. I just sat there with my camera positioned and waited for it to strike. I had two friends there with their own cameras doing the same thing.

Chase, I love storms. They relax me. I get the best sleep of my life during storms.

Karl, sadly, no. Too focused on photography by that time. Bummer.

Sandra, you get nothing out there?

Allison, yeah, we weren't eating at the bar so that does make sense. Forgot about that detail.

Suze, then you would've loved this one.

Sizzle, I'm glad, too. But most of those lightning shots were taken after the storm was done in our area.

*lynne*, they are fun storms, aren't they? Pretty typical down there?

Bec, I used to love running in the rain. Scared the bejeezus out of my parents when I would do it in a lightning storm, though. Hindsight being 20/20, it may not have been one of the better decisions in my life.

Love the pics. I'm looking forward to getting some good shots of West Texas lightning storms when I move back.

I have come to the conclusion from my own experience that getting drunk can totally be a state of mind. If you're in the right mood, it can only take a few drinks, but if you're in the wrong mood you can guzzle all you want and nada happens.

Weather is dumb on this end too...

Great capture! I know how difficult these shots are.

I was caught In the middle of a railroad track - THUN - DER!

I'm still waiting for the "hellacious" thunderstorms I was assured Georgia hosts. We've only had one that was impressive. I think the Weather Gods know I'm here. :>(

Ugh, I had the "pleasure" of visiting relatives in chicago last year towards the end of july, it was technically colder than here, but the humidity made it just...I cant think of a word to describe it.

Shutter lag being what it is on digital cameras, how did you manage the lightning shots?

Nicole, yeah, West Texas gets some good storms. A friend of mine used to go on road trips to that area when he was a meteorology major doing stormchasing. I was always jealous.

Nat, what kinds of crap is raining down on you now?

ChickyBabe, definitely not easy. I can't believe I got one let alone two.

SJ, it's your luck. No storms now in Georgia and California gets snow as soon as you leave. Go fig, eh?

Cougfan, the humidity is always unbearable in the Chicago suburbs when it hits. It's not every day, but when it's here, you can't possibly miss it. Good to see you back.

Claire, my Sony has a pretty good shutter speed. However, my real trick was that I did the half button-press (for focus' sake) and held the button down with the camera pointed in the general direction where I expected the lightning to strike. Then, when I saw lightning, I just pushed the button the rest of the way and prayed. Got me two good shots so I'm happy.

Kevin> yep... in fact, the tropical thunderstorms here have been growing more violent and deadly recently... i think that in the 3 months I've been back in Malaysia, almost every storm has caused floods (some *massive* ones too!); lightning has been a major issue too - Fuel Storage Tanks bursting into flame, people killed, all from being hit by lighting... yikes!!

Death by Fuel Storage Tank... may have to remember that for the book I'll never write.

Wow I love the photos so striking. Sorry I could not resist the pun. The photos truly are striking. I love rainy weather even if it means I have to stand out in front of a tornado to feel it. I'm just crazy like that and Okla. has lot of both. Crazy people and tornadoes the is. Speaking of which I have the weather man chiming in as I type!!! In 10 min we now have a flash flood thunder storm! I love this weather!!! If I wasn't at work I would be outside standing the the pouring rain... I think I just might ~ Goddess

Howdy Lost/Goddess. I'd reply by e-mail, as is my M.O., but there wasn't one to use. So I hope you check back on this post. I say go stand in the rain anyway. It will make you feel much better. Nothing like some rain on the face to bring you back to life and put everything in perspective. And I really do mean that. No sarcasm... for once in my blogging life.