The pursuit of happiness, it's a common goal...

Some media-related pop culture notes for you... 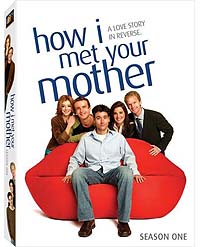 Damn if last night's episode of How I Met Your Mother featuring Barney's gay brother, James, played by Wayne Brady wasn't LEGEN-wait for it and I hope you're not lactose intolerant-DARY. We love that show and have become hooked on watching the first season DVD set as well as the new episodes. HIMYM and The Office are the only two can't-miss sitcoms this season, IMHO. Nothing else quite compares. Not even My Name is Earl and Two and a Half Men, both of which are pale comparisons of their earlier selves. Actually, in my opinion, 2.5M has been off its game for a couple years now save for last season's ugachaka episode.

I am FINALLY caught up on Veronica Mars after falling three episodes behind. This will all change after a new episode airs tonight. Hopefully, I will not fall this behind again.

This, of course, is not nearly as bad as my delinquency with Heroes. I really thought I was only two episodes behind until I looked at the episode descriptions on IMDb and discovered that I am, in fact, four episodes back; nay, five after the new one aired last night. Something screwed up my TiVo's recording of two earlier episodes in late October/early November and I didn't even know about it. Thankfully, Dave got me on BitTorrent (the Mac client is Xtorrent - and, unlike my earlier forays into torrenting, it actually works) and I've downloaded all five of them, optimized them for my iPod, and I will watch them in the coming week or so.

Sorry Bre, but we have not watched last week's Studio 60 yet. After loving the episode several weeks ago with the blacklisted writer, the two that followed regarding the extradiction of Tom Jeter to Nevada just bored the living crap out of us, so we've been biding our time catching up on the most recent episodes. We will, though. I promise.

Enough about TV. Well, for the most part, that is. While watching a show last night, we saw a preview for the new live-action-mixed-with-talking-real-animals version of Charlotte's Web that is coming out around Christmas. Katie, being the Web freak that she's been her whole life, desperately wants to see it. But she has thrown down the gauntlet for me... I have to read the book before I can see it with her. No, I've never read it. So I grabbed our copy from our bookshelf and started it last night. So far, it's pretty good. I had to put it down after a while because I was just so dang tired (it was 12:30 in the morning!), but I'll finish it soon. And then I'll start Chris Gardner's The Pursuit of Happyness, which is soon being released as a movie starring Will Smith and his son, Jaden.

A grand plan, that's for sure. Especially considering I'm still in the process of reading Neil Gaiman's Anansi Boys. It's a spectacular book, but I'm just having trouble finding time to read. That's what I hate about TV season... I fall too far behind on everything else I want to do. Damn.

Yeah, the episodes in Nevada were really not of the good. I'm crossing all my fingers that they're going to pull out a miracle though and the show won't get cancelled because I really need to see Matthew Perry on a consistent basis in my living room.

I'm pretty excited about Charlotte's Web and also about Bridge to Terabithia - 2 of my favorite books as a kid! Yay!

I've liked every episode of Studio 60... including the ones in Nevada. I realize there's no hope for renewal, but was happy that they at least decided to finish out the season.

How I Met Your Mother is on fire this season. Each show just gets better and better, and it's one of the very few shows I simply cannot miss (Veronica Mars being the other, of course!).

Heroes is one of the reasons G-d created Tivo (particularly since Lost is on mid-season hiatus). That show is friggin' awesome! Shame on you for being behind!

One of the other "must see" shows out there is Battlestar Galactica on Sci-Fi. Yes, I know the profound geekiness that the memories of the 70's show inspires. However, the new version is fan-fucking-tastic. It's incredibly character, not psuedo-science, driven (like Heroes and the reason I avoid Star Trek like the plague) and has some of the best writing and acting on television. And Tricia Helfer doesn't hurt either...

Now, if only I could get Sci-Fi to pick up Dead Like Me from the Showtime graveyard...

Just getting around to listening to Soundgarden??? Better late than never I guess.

I must be really lame and out of the loop. I've never seen Studio 60 OR How I Met Your Mother. Better put my TiVo to some good use as soon as possible.

Tonight is the VM S3 Arc 1 Finale! So even if you miss tonight, it's going into repeats for a while before Arc 2 begins. Don't miss tonight, though!

Dave, I'm really hoping last week's and this week's episodes of Studio 60 are better. I don't know why I didn't like the Nevada ones, but they bored me. I'm weird like that.

BA, yeah, as I've told many, I have yet to watch the new BSG. Watched the old series like it was going out of style and I enjoyed the TV movie of the new one. Just never tuned into the series. Maybe I should. I enjoyed Dead Like Me, too.

Scott, just getting around to? No. Just what I'm listening to now. I owned that album when it first came out. Back in your grade school days, buddy boy.

Elaine, if not both, then definitely HIMYM.

Erin, it is being TiVo'd no matter what. Just a matter of when I'll actually watch it.

Muahahaha, you're sooooooo a torrenter now. Welcome to the darkside. Wait until you start downloading entire seasons.

I can't read more than one thing at once...you're a superhero.

I think you need to train yourself to not need sleep. Hey, it worked for Einstein.

I LOVED HIMYM last night, especially the "Give me five" thing. I just watche dthe first season of VM so I have waaaay more catching up to do than you do. ;-)

The more I watch How I Met Your Mother, the more I like it. It was always good, but it's one of those shows, like The Office, that I really look forward to every week. I've also started feeling that way more and more about The Class.

Charlotte's web is a lovely sweet story .. I'd like to see the new movie too

Dustin, it may still happen.

SJ, I will always need sleep.

francesdanger, yeah, you still got season two, don't you?

nicole, The Class is getting better but still has a ways to go for me personally. There are a couple characters I can do without.

kazza, I read a couple more chapters last night and really am liking it.

I know I am so late but....please. Wayne Brady on the show? Freaking awesome.

I totally got Shawn into Studio 60 and now he is cursing me for making him like one more show.