Home Archives Profile Subscribe Links Rankings
They say it's your birthday...
I ain't missin' not a single thing...

First, a quick "happy anniversary" to my parents who are celebrating their 36th  year together today.

Yesterday, after I finished my lunch, I happened to walk by an EB Games. I figured I’d pop in to see if they had a display model of the new Nintendo Wii. They did.

A customer was there trying to figure out how to play Excite Truck with the new one-handed remote control thingamajig that has been lovingly dubbed the Wiimote (“Remote.” Get it?). He was having a bit of trouble figuring it out. Then one of the employees told him to turn the controller sideways and hold it two handed like the ends of a steering wheel.

This is when the fun began.

If you don’t know, the Nintendo Wii uses a sort of IR/Bluetooth detection “field” to control games. Remember, back in the day, when you would sit there with your video game remote and lean into games hoping to make a tighter turn or swing the remote down as though it would actually affect how you swing a sword? Now it does. Every little motion matters. Prepare to become physically invested in your gaming.

There was no steering wheel or control stick to make my truck move through its desert race course. There was only me… standing there turning the controller as though the middle part was on a central axis point. It is about the coolest damn thing I’ve ever tried in my life.

When I got my hands on the Wiimote, I was flying through the course. Every little motion that I made had ramifications on what happened on the screen. Just to test it, as I launched over a big jump and was hanging in midair, I turned the controller and, sure enough, the wheels turned on the front axle.

I have only played this thing for ten minutes now and I’m already declaring it the coolest damn next-gen video game system out there. Forget PS3 and the 360. I don’t want ‘em. Just gimme a Wii.

Oh, and make sure you take your allergy meds beforehand. You sneeze… you may die. Only virtually, but still and all the same.

Sorry about the pun in the title. Too good to pass up.

And here's a screen cap from Excite Truck courtesy of Gamespot... 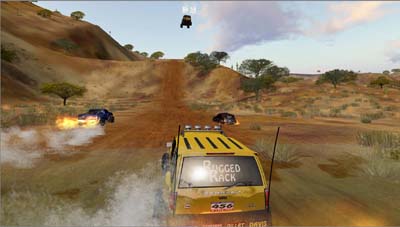 And we'll have fun, fun, fun 'til your daddy takes the Wiimote a-wa-a-ay!

I take it that this is more of the birthday promotion stuff. I mean it's OK if it is, but if you are really expecting to receive this in the next month, I think you should be a little more clear in your desire.

Yeah those things are tight. The graphics are a little under par, but they've definitely taken video games to the next level.

A third-party company has released a plastic steering wheel that you snap the controller into so it's even more like driving.

Nintendo "gets" gaming. They're all about the play, which is why I'll buy a Wii before any other next-gen console.

My daughter The College Kid is a gaming geek. That's not a bad thing. But she has a PS2. I'm thinking she should stay with that until the kinks are all worked out with the new stuff. What do you think?

I'm always behind on this tech stuff. I just put the Nintendo DS on my Christmas list...admittedly in part so that I can play the virtual doggie game. :) I may like video games, but at the end of the day I'm still a girl!

Thanks. Thanks a lot. Now I want a Wii, and I haven't wanted or owned a console gaming system since Nintendo OG (think duck hunt.) Dammit. I have enough media obsessions to spend my money on! I don't need a new one!

But that sounds really fricking cool.

Allison, would you expect any less of me?

Dagny, not even I would be so bold as to ask for something this daring and expensive.

Johnny, I think graphics can be overrated. People worry too much about the look and not the gameplay. That's why Nintendo is still the best, IMHO.

Dave, I'm right there with you. They don't go for all the bells and whistles like the 360 media center and the Blu-Ray DVD player. They're all about the gaming. And that's what I love.

java, personally, I'd go with a Wii. That's just my take, though. Most hardcore gamers want the next PS or XBox. However, the two guys that were in EB Games working the store were talking about how they both love the Wii over the PS3 and 360. Does that help you at all?

diane, I'm a fool for the simple games, too. I don't like the ones where I commit myself for a lifetime. Just one-off games for the most part for me. That's why this racing game is so damn cool. I'm a sucker for that stuff.

Erin, oh it is. And it's one of the first times I've been truly jazzed about video gaming in years.

I am so not a gamer. I haven't ever lusted for a gaming system. Until the first commercial I saw for the Wii.

It bumped the iPod off the top of my wish list.

Yes, it does ... I like the price so much better as well. I would even buy it for myself, that's how much I like it! I love the action controller ... very cool. Thanks.

I'm not much of a gamer, but when I play I make those motions with the controller. You, sir, have just sold me a Wii.

java, no problem. But remember that this is not a gift to yourself. Or is it?

francesdanger, I need to talk to Nintendo about some commission checks.

That is uber cool. I'd been hearing about the coolness of Nintendo's new controllers, but now I get it. They really do get gaming which is why they've been able to retain a larger percentage of their older audience on both sides of the gender divide.

I posted about this just a few days ago. I so totally want a Wii. And I'm not a gamer-type person. at. all.

However, i don't think santa will be bringing me one of these lovely toys this christmas... oh well...

Dustin, it's their understanding of gaming that is keeping them alive. Logically speaking, these multipurpose systems like the PS3 and the 360 should bury the Wii. But they're not because this is the first system people are truly excited about. Yeah, people line up for all three. But once they owned it, were people talking about the 360 for long? Not really. It kinda disappeared. Same will happen with the PS3 in my opinion. The Wii on the other hand... ;-)

Suze, I really think this is the sort of system that will win over even the staunchest non gamer.