Carry moonbeams home in a jar...

Starlight, Starbright
First star I see tonight
I wish I may
I wish I might
Have the wish
I wish tonight

I wish Chicago only had one baseball team... think you can make that happen, universe?

At this point in the game, it could swing either to the Sox or Cubs side and it would make little to no difference to me. I just hate how divided our city becomes as a result of baseball.

I say this because, right now, I'm sick to death of hearing White Sox fans whine about why the city is standing so proudly behind the Bears in their Super Bowl charge, yet they didn't for the Sox two years ago. And these Sox fans are absolutely correct.

These days, everywhere you go, you see stuff like this... 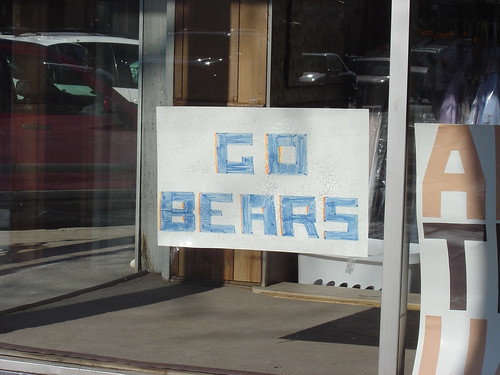 Support for the Bears in Chicago and the suburbs is pretty much unanimous. Everyone gets behind the Bears (save for the occasional Packers fan here and there). And the reason for this is because we have one football team. A singular pigskin entity to stand behind, to represent us, to make us love it, to make us feel pride.

Baseball... not so much.

With the Cubs on the north side and the White Sox on the south side of the city, sports fans are forcibly separated into two camps. In Chicagoland, you are one or the other. According to the diehards, there is no feasible way you can support both, which I find to be a load of crap.

I count myself as a Cubs fan, but I was pulling for the White Sox in their title run two seasons ago. I was happy they were doing so well. I wanted them to do even better. I knew it was good for the city considering it had been 88 years since we'd seen any baseball championship title. Yes, I even bought AL and World Series penants to hang amidst my collection of penants from my childhood.

However, Cubbie loyalists thought I was betraying them while the Sox faithful didn't want my support.

WTF??? So you're telling me I can't be a fan of the city?? Why the heck not? That makes no sense and is just ludicrous. I hate that baseball separates us even more so than bipartisan politics. And it's even been known to erupt into physical confrontations.  It's stupid.

So if you're going to be such extremists, here's the one and only solution to all your whining... LEAVE CHICAGO! I don't care who does it, but one of you must. It will be the only way to solidify support behind a single team.

Nobody wants to face it, but these are the cold, hard facts behind the situation at hand. Kentucky, where I used to live, had the simplest, yet most perfect state motto and I feel it is applicable here, "United we stand, divided we fall." It is the truth. A city divided cannot stand. Even if for only baseball.

Ed note: Do I actually expect this to happen? No. Both teams have been here far too long for either to turn tail and run. I'm simply making a point to all the whiners out there. Just shut up and deal with it.

On a much less vitriolic note, the recipe for Katie's cookies, as mentioned yesterday, is in the extended post.

For those who don't bake regularly, C = cup, T = tablespoon, t = teaspoon. Don't mix up those last two. It would be bad.

You can, of course, substitute light oil, reduced fat margarine, and skim milk, among others, if you so desire with no disastrous results.

Makes a big batch of cookies and they do freeze well.

Jan 30
Sometimes I swear that Katie and I are of one mind. Last night, I was heading home from work. Since I couldn't get a hold of Katie on her cellphone, despite the fact she was supposed to get off work...
Next Post

Feb 1
Why do we have to age? How come I have not yet discovered my own personal Neverland? This morning, as I was getting ready for work, I looked at myself in the mirror and discovered just how grey the hair...

A) Go ahead and send us one of the teams. We're about to lose The Hornets and need a replacement pro team. We're not picky about which game they play since we don't have any at all.

C) Incredibly upset that I now have that song stuck in my head as it's the version from the old sitcom 'Out of this World' which is torture.

I understand about the team thing. Most of us around here are just excited if one of the teams from the Bay Area makes it to the Series, Super Bowl, etc.

Also, love the note about the difference between "T" and "t" in the recipe.

I think that you make a good point about being divided. It sucks. We live neat Baltimore. My wife is from Ohio. She HATES the Ravens cause they used to be the Browns. Although here, people tell the O-hi's to quit complaining, in one breath then do their own bitching about the Colts "leaving in the dead of night". I'm not a big sports fan so I can take or leave the Ravens, and the O's, I tend to support the underdog. (Unless it is an Ohio State game, then I am bound by marriage to root for them!)

Thanks for the recipe!

Sometimes rivalries are a part of enjoying the game, but only to a certain point. In San Francisco, the Giants/Dodgers rivalry is joked about and teasing is good natured. In LA, I was called a name so nasty it's a word I don't even say aloud, and a fan was shot in the parking lot. WTF?

When were in Chicago, a guy tried to sell us boat tour tickets at the Shedd Aquarium. We told him we couldn't cause we had tickets to a baseball game that afternoon. He asked which team. The Cubs. Oh good, he said, cause I wouldn't have let you go if it were the Sox. And I don't know that he was completely kidding.

I don't hate the Black Sox cause they're my beloved (3rd fave) Cubbies' rivals. I hate them because they're dirty dirty cheaters. :)

You're absolutely right. And the sooner the stupid Cubs get lost the better off we'll all be.

frances, I'll suggest your area to both and let them duke it out. I love this song due to fond memories from Hudson Hawk.

Dagny, I was doing my best to replicate Ghostbusters... "don't cross the streams... it would be bad."

G-man, that's funny about the irony in Ravens/Colts complaints.

Erin, yeah, but the whole Giants/Dodgers thing is not quite the same since the Giants are 8 hours north. Dodgers/Angels? Yes. I had a friend who lived out there and only went to games at Anaheim because he couldn't stand Dodger fans. He said they were some of the most arrogant idiots he'd ever witnessed. And I doubt that guy was joking either.

I'm one of the few people I know that openly roots for the Washington Huskies, Gonzaga Bulldogs and Washington State even though I'm a Husky first and foremost. I never understand fans that cheer when they hear that Washington State lost to Arizona or USC or whoever (not this year though). My hatred for Arizona and USC tops any silly in-state rivalry.

By the way, I don't go to Anaheim Angels games because they are uninformed, homogenous, rude idiots who freak out when a monkey is shown on the diamondvision.

I can't say that I'm a huge Dodger fan either, but I prefer Dodger Stadium any day because the fans are so diverse, they know their baseball and, surprisingly for Los Angeles, are very passionate.

From what I've heard, "passionate" is an understatement when it comes to Dodger fans. You have a lot of teams you love, don't you?