Further on down the road...

Behind where my parents live, and where I spent most of my teenage years, is a tiny little connector street. It connects the incorporated part of our subdivision with the unincorporated part. It's maybe a hundred or so feet long and has one house along it. For the longest time, it never had a name.

Then, when I was back from college for one summer or another, I believe, I was driving by it and saw that there was now a street sign up for it. And the street was named for the one family that lived in that singular house. I went to school with the kid and never really cared much for him. I didn't hate him, but I wouldn't have supported him if the naming of this street in his family's honor was put to a vote.

Call it jealousy if you will.

At work, I have maps of the city on the wall. They are there more for reference than anything. One of the maps includes all the subdivisions in the city. I love maps. Always have and always will. So I find myself looking up at them all the time.

One day recently, I just happened to look up from my computer and a name caught my eye. It was one of the subdivisions and it bore the surname of someone I knew. Since the name, while unusual to most, is actually pretty common in this city, I didn't really think much of it. Until I looked at the streets within the subdivision and saw that one of them bore her first name, as well.

Curiosity got the better of me and I e-mailed her. Yep, it was named for her family because her father owned the farmland on which the subdivision was built.

I want a subdivision. Heck, I'll settle for a street. Maybe even a court or cul-de-sac.

What do I have to do to get one? Please tell me. And without resorting to farming, thank you very much.

Kapgar Court has a nice ring to it, don't you think? 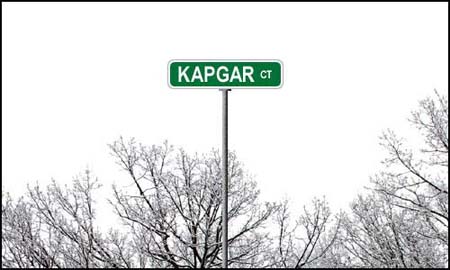 Am I aiming too small here? Should I just go balls to the wall and try for the United States of Kapgar?

To give Chicago a Super Bowl chance...

Jan 21
And where will the Bears be in two weeks? Da Bears! Yes, BA, I put Rex Grossman in my header. I feel sufficiently dirty. ;-)
Next Post

Someone to watch over me...

Jan 23
I've uncovered a funny thing... how my day turns out is determined by my watch of all things. Since starting my new job, I've been pretty easygoing about things that happen. I don't stress out like I used to. I've...

They, you know, "THEY", recently changed a name of a street near me to that of the family that owns the property.

I think you need to have a Kapgar street sign made to put at the end of your driveway at least.

By the way, I am lovin your template. have a great week.

While it's no street name, I did get to choose the street number for my candy store back when I owned my own business. My only confines were that it had to start with 27 and could not be an address already in use. I chose 2733 ¹/3. Twelve years later, that location *still* has that addres, and yes, it totally makes me feel cool.

My Great Grandparents got the street they lived on changed to their last name as well. Granted, it was in the mountains of KY and I'm pretty sure most of the citizens of the town were family members.

Your template is great!

Interesting post. It never occurred to me that in smaller cities that streets would be named after people you could actually know, rather than astronauts or Senators. This is a good reason to move to a small town.

I think "Way" would be even better. I just love the double entendre.

There's a Heikkinen St. in the upper peninsula in Michigan, and I've always wanted to steal the sign.

there are Jones Streets in just about every city and yet i am unable to bask in the specialness of it because, let's face it, that's one of the most common names after smith. it'd be so cool if you could name a street after you!

Sounds to me like you've been hanging around that 'Dave' character too long. Methinks he's rubbed off on you, sir.

I'd settle for just regular names. Columbia, MD has some whoppers. Stagghorn Path or Thelo Garth as an example, a lot of which one would think should end in street or drive but they just end like Broken Staff. Since you enjoy maps, you can use google maps, enjoy.

Ok wait....if you get a street named after you, would you be tempted to steal it and put it in your house?

We've got to cover this from every angle!

I cannot read a map to save my life. I remember being in San Francisco and literally being lost 99.9% of the time because of my inability to read maps. Not the best city for the map illiterate.

August, thanks and great idea.

frances, that is an awesome number.

Neil, and yet this isn't even really a smaller city. One of the largest in Illinois.

BA and Dagny, "Kapgar Way or the Highway"?

Sandra, and you haven't? For shame!

Sizzle, so look for your first name. That's a rarity.

Chase, he can be a bad influence.

g-man, yeah, you got some messed up names out there.

Hilly, the temptation will be there, but pride might outweigh it.

Elaine, you can't read maps? That does hurt. Sorry. You might want to avoid Chicago.

I think giving you a street named after you is the least Chicago can do. After all, you ARE blessing them with your presence.

No doubt! Let's co-campaign this one. We'll get a street for you down in Florida. But since you live in a smaller town, we need to push for one in a bigger burgh. Got an idea where you want it?