We're just here to do the Super Bowl Shuffle...

I weep for an old friend I lost on Monday.

That friend being my favorite plastic bowl.

Yeah, yeah, big lead up, heckuva let down, right? Well, I weep all the same if that's okay with you. 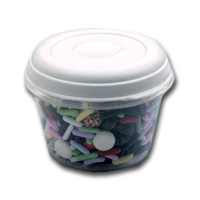 Nearly 14 years ago, I purchased a Rubbermaid Servin' Saver bowl. It was one of my first purchases for college. One of those things you know you're going to need when you live in a dorm that has no kitchen and you will need to cook things every once in a while in a microwave or store things in a minifridge. So I bought it.

It was beat to death, stained by pasta sauce, and pock-marked where heated contents melted away the inner protective coating.

But it never once gave out on me. I used it for cooking, storage, and eating. And I loved it for its tenacity.

And now it's gone.

At my new job, we have a dishwasher in one of the breakrooms. And, once in a while, when I use it to cook something that I have difficulty washing out by hand, I'll put the bowl in the dishwasher. So I did just that this past Friday.

On Monday, I went in to grab my bowl to use for lunch... and it was gone.

I checked cabinets, the microwave, the sink, even the garbage can and recycle bin. Nothing.

I pray somebody just decided to use it and will eventually return it. But, for now, I can only assume the worst.

It may seem like just a stupid bowl, but it's been many places with me and I planned to use it until the day I die... or it dies... whichever came first. I actually had a slightly sentimental attachment to it.

Even Katie knew exactly what I was talking about when I came home Monday night and told her "my bowl is gone." Her eyes widened and even she got a weepy look in her face. She's known the bowl for our entire relationship and used it herself many times back in college.

I can't bring myself to buy a new one.

I need to know, for certain, what became of my Rubbermaid friend.

We can start a company and make misery...

Jan 18
My sinuses won't drain. Therefore, my nose is plugged up. Therefore, I can't properly breathe. Therefore, my voice is rather raspy and a bit higher pitched than normal. Yet, somehow, I manage to find a positive amidst all this feeling-bad...
Next Post

Jan 20
I didn't realize it had been nearly two months since I'd posted photos. Then again, it's been that long since I've actually gone out and taken any new shots. That's so unlike me. I think these are from Wednesday when...

Maybe put a big picture of your bowl on a WANTED poster in the breakroom. I feel for you, dude. Our attachments to those steadfast items are often the strongest.

I cannot believe that someone took your bowl. That is low. Here's to hoping that it turns up.

That sucks! I'm sure someone else just used it and will probably put it back in your work sink or dishwasher. It's less likely that the person who took it will bring it home and keep it.

At my job, we have areas in the kitchen that are "free use" which means that if an item is in that area, anyone can use it. Otherwise, the other items in the kitchen belong to specific workers. Regarding Tupperwares especially, most of us take a Sharpie to them and put our names/initials on the bottoms.

I'll say a prayer for your bowl, and hope that it didn't meet the same fate as so many others, warping under the heat and pressure of the dishwasher. I have so similarly described bowls, so perhaps it is just a case of mistaken identity.
I can relate to you on attaching sentimental value to kitchen items. When I was a wee tot, for one summer, my best friend was an egg beater (the kind with the rotating handle) and my family never lets me forget it. I still wonder what happened to it.

You poor thing. There should be an Amber Alert for this sort of thing.

Does the passing of a bowl warrant flowers and a sympathy card? Or maybe flowers made from saran wrap? A bag of twisty ties?

I'm sorry for your loss, Kevin. It's in a better place where there's no pain (like microwaves and dishwashers).

Awwww!! See, this is good use of finding good material in the mundane. That was so much more than a bowl with a lid!
I had a mixing bowl that my mom gave me. It was so 70's looking, and I had strong memories attached to it because she would make pizza dough in it, and we always ate our family popcorn out of it. I cracked it one day washing dishes. I seriously did weep for that bowl. *sigh*

oh no! i'm so sad for you. i like karl's idea of the wanted poster- it could lead to her return. be strong my friend.

Keep the faith, my man. You ever know, it may turn up in a St. Louis apartment complex four years from now.

Well that's a bunch of cocksuckerry for sure. I agree with the person who said to make a WANTED poster, LOL.

When you are ready for a new one, have Katie buy it for you so it holds some sentimental value when you start out with it...I know nothing can replace your Rubbermaid friend, but I do hope that you find a new plastic buddy soon!

Dagny, I really do hope it's just an innocent borrowing of it.

Eve, I might just do that with the Sharpie if I ever get it back.

g-man, I doubt it warped and the woman who ran and emptied the dishwasher (I found her) said she didn't throw anything away from it. So I'm holding out hope.

sandra, interesting use of Amber Alert, but I like it!

Chase, a crew of mourners dressed in paper plates?

diane, ahhhh... we had a popcorn bowl just like that, too. I never found out what happened to it. My mom probably pitched it, but we had it for years when I was a kid.

sizzle, I'm remaining as positive as I can.

Rick, please may they not have violated it in St. Louis. Gah!

Hilly, that's not a bad idea about having Katie pick one out for me. It would give it special meaning. But for now, I'm going to hope it shows. What's an appropriate mourning period for this?

A Wanted poster is very necessary. I hope someone accidentally took your bowl, thinking it was theirs, and they'll see your Wanted poster and feel horrible and return it immediately with apologies and maybe a little make-it-up-to-you lasagna in the bowl and all will be well. I bet I'm psychic and that's exactly what will happen.

Oh you poor darling. It certainly is too soon to move on... in the meantime just buy some of those toss-able g!adware things... they're hard to get attached to.

Dude, that sucks. I hope it turns up! If you go the wanted poster route, you might want to make sure amnesty is implied so the culprit isn't tempted to make the evidence disappear.

argh, that sux. Hope it turns up.

I'm all for the "Wanted" poster, but I think you should also take a few things from the break room, photograph them and hang "Do you know where your _______ is?" until your friend is returned to you.

I want to send you one of my new bowls I received today as a gift for my birthday (see pic on my blog). It would make me very happy to send you one ... I have 12 of them and I'll never use them all at once. And they're the newest Rubbermaid has to over ... they fold flat. Send me your address (privately) and I'll pass one on to you. Consider it a late birthday present.

I realized after I sent that last post that I was totally insensitive and not acknowledging your affection for "the bowl."

So, please accept my condolences for your loss of "the bowl."

But, I'll still send you a new one. Not to replace the lost bowl, but just so you can start a new life of wonderful memories. With something new and improved. A flat-folding bowl.

(Come on, you know you want to ... you don't have to feel like your not honoring the memory of the old bowl. I'll never tell. We don't even have to call it a bowl. We can call it a storage container. Yeah, that's the ticket!)

My deepest sympathies on your heart rending loss. As someone who lost a childhood Cookie Monster cookie jar to a fire I know exactly how you feel. All I can say is, it gets better.

I'd also like to extend my hand to help by offering to beat the living tar out of whoever took it. The dead tar too.

Bre, actually, that's what I've been using. That or a real plate that a coworker's letting me borrow.

Claire, unless they've hurt him. Then a beatdown is imminent. ;-)

Mocha, fight fire with fire, eh? I like the thinking.

java, thank you for the offer. I'm still going to wait a week though and see if it turns up. I'm holding out hope for the best. But I'll let you know after that. Thanks!

I extend my condolences and a burp in memory of your loss.