Who? Christopher Moore! That's who! 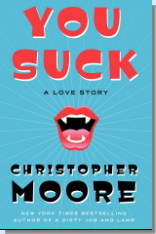 Yes, the author that I so highly lauded last year when I found out he was coming to the Chiburbs to sign copies of his then-new book A Dirty Job is returning in support of You Suck: A Love Story, the sequel to Bloodsucking Fiends: A Love Story.

He mentioned that he was working on You Suck when he was here last year, but I had no idea he was this far along with it. I just happened to walk in Anderson's Bookshop on my lunch break the other day when I saw it on the new release rack.

I was floored. I had heard nothing about its release. But I'm so happy I went in there. Completely on a whim, by the way. Guess it might be time to sign up for that Author Tracker thingie.

Then, as I was paying for the book, the clerk told me Moore was returning on April 3. And, since they hadn't officially announced the visit yet, I am now the first person in line for the signing. I got my number and everything!!! You wanna know what makes it even better? Instead of having to drive in from a job that's 20-odd minutes away to get to the bookstore, I only need to walk two blocks. That's how close I am at my new digs. I'm gonna have great seats this time!

This so rocks! I think I may now have to find a hardcover copy of Lamb just to have it signed since I had him sign all my other books the last time he was here.

Oh yeah, I was also able to sneak a peek at the list of authors coming in future months. On May 9, Berkeley Breathed, the genius behind the comic strip formerly known as Bloom County, will be here. And, on May 16, Henry "The Fonz" Winkler will be here for one of his Hank Zipzer novels. I plan to be in attendance at both. I just hope I can convince Breathed to sign my old BC anthologies and maybe get Winkler to sign a Happy Days box set. In addition to whatever they happen to be hawking at the time, of course.

Oh, and just like before, if anyone is interested in having books signed, let me know. We can figure out some kind of arrangement. I'm good like that. Just ask Belinda. Unless, of course, you want to drive out for it and we can hang at the signings.

Feb 16
Okay everybody, let's get lined up! Sopranos and altos in the front. Yep, that's right. Can we cluster all the sopranos right in the middle and have the altos flank them on the sides? Perfect! Tenors... I need you to...
Next Post

I want somebody to shove me...

Feb 19
Several weeks ago, Katie and I decided to try to move our entertainment center about a foot to the right of where it currently sits. The way we figured it, the TV sitting in the middle of it might be...

Berkeley Breathed? Get out! There was a time when my day was not complete until I had read "Bloom County." You are so lucky.

Ultra sweet. Breathed is at the top of the heap, hope you don't piss him off.

i totally missed him here darn it! i'm happy for you. :) and i see he'll be at my favorite bookstore in santa cruz at the end of his tour- yay!

What the hell? I've never heard of this author....hrm, time to try something new. And here I thought I was a pretty hip girl.

I am so jealous you're going to meet Berkeley Breathed! Right next to 'Calvin and Hobbes' 'Bloom County' was my favorite!

I've always seen Moore's books but never picked one up. Looks like I'll have to go book shopping soon.

Dagny, Bloom County and Calvin and Hobbes were my entertainment life during my childhood and early teens. Loved 'em both.

Biff Spiffy, I hope I don't either. I'd hate for him to shred my book before my eyes. Yikes. And welcome aboard.

Hilly and frances, start with Lamb: The Gospel According to Biff, Christ's Childhood Pal. Fantastic book.

Henry Winkler is really nice. I met him once when I accosted him at ColdStone in Brentwood. I noticed the ice cream in his hands, asked what it was, and while he was telling me what he'd ordered I looked up and had a nice "Oh shit, it's the Fonz." moment. As my Mom said, only I would see the food, not the man holding it.

You still got my address? Um, don't bother with Henry Winkler or Berkeley Breathed, though. I'm not going to be able to attend those two signings due to the classes I'm teaching. And the store can't guarantee they can get stuff signed for me. Maybe Breathed, not likely Winkler. Just found that out last week. Still on for Moore, though.