Home Archives Profile Subscribe Links Rankings
Look away...
I am aiming to be somebody...

Okay, now that this is out of my system.

I found this editorial in the Chicago Tribune from last Sunday and I wanted to reprint it here because it makes a great point about how out of hand corporate sponsorship is getting. I can't find it in the Tribune's online archives so, hopefully, they won't be too pissed about me retyping it here. I know not all of you are NFL fans, but please read through to the end. The point it makes, while rooted in the NFL, transcends it because I do see this happening in the normal world around us every day. 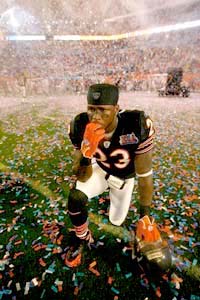 A Word to the NFL

If you saw this photo of Devin Hester on the front page of the Tribune on Feb. 5, you may not have noticed the credit line identifying the Tribune's Nuccio DiNuzzo as the photographer. But you understood, the moment you saw this shot the day after the Chicago Bears' loss to the Indianapolis Colts in Super Bowl XLI, the sadness it captured. It was telling, poignant and unbiased -- the work of a professional.

The National Football League is trying to compromise that professionalism. The NFL has decreed that all photographers covering its games on the sidelines will be required to wear red vests that sport sponsors' logos. The NFL wants to turn news photographers into walking billboards.

The league claims the vests are necessary for security. Perhaps they are. But the advertising logos for Canon and Reebok? Most newspapers, including this one, have stringent ethics policies. Reporters and photographers are explicitly forbidden from endorsing products or profiting from  a story or event. But the NFL wants to make news photographers part of the NFL "product."

The Tribune won't allow its photographers to cover games in vests with logos. "We're not doing it," said George de Lama, the managing editor for news. "Absolutely not." If the rule doesn't change, the paper will cover the NFL without visuals.

Maybe the NFL no longer thinks it needs independent media coverage of its games. The NFL is the richest, most powerful and most popular sports league in the United States. It has its own documentary film production arm, its own Web site and, now, even its own television network. The combined television rights for its games go for billions of dollars.

But it can't slap ad logos on independent photographers.

It will be a shame if Tribune photographers don't have a chance to capture another poignant shot like this one -- or a shot of a triumphant Devin Hester at Super Bowl XLII. But they won't be on the sidelines unless the NFL backs down.

I think it's complete and utter BS the stance that the NFL is taking on this matter. They also want to ban outside news video cameras so third party news agencies have to pay for official NFL-produced footage for their nightly newscasts. I've heard that some news channels like NBC, ABC, CBS, and Fox are throwing a penalty flag on this one and threatening to do something similar to what the Tribune is threatening... they'll talk about the games, but not show any footage.

Ridiculous. It gets so frustrating seeing the ever increasing amount of corporate sponsorship in ALL sports. I guess we shouldn't really be surprised w/ the amount of power and influence that corporations have in non-sports fields though.

So these folks not realize that greed is a deadly sin? I hope that the networks take the same stance as the Tribune. It's a complete load of bull. Of course, this is coming from the woman who insists upon calling the local stadiums by their original names. I was recently checking on concert tickets and read that it would be at Oracle Arena. My first thought? "Where the fuck is Oracle Arena?" Nope, it will always be the Oakland Coliseum and Arena for me.

I really love it when folks stand up and say "hell no!" It makes me a bigger fan of the tribune, I must say

Insane. When will the madness stop - the NFL is going to hell in a handbasket.

Thank you for posting this, interesting to say the least.

I wish more media outlets would take similar actions. The same thing with the Hilton/Lohan/Ritchie coverage. They should come up with ONE network that would show BS 24 hours a day. Then when I want to hear this crap I'd know where to find it.

What rocks about the Simpsons movie? All the previews look silly to me... I would like to know what parts you liked :)

Replicant, it is sad that they have this level of influence. But if sports were played for love of the game like they once were... when players could walk down the street like semi-normal people... and contracts weren't so ridiculous... maybe it could all be fun again.

Dagny, I do that too!!! The White Sox still play at Comiskey, dammit! Not Cellular One or whatever it is these days.

Bre, I just hope they hold to it and that this isn't just BS posturing.

Beth, no problem. Thanks for reading and commenting.

metalmom, I still like that MSNBC anchor who refused to read the Paris Hilton stuff on the air and burned the script live. I worship that woman (the anchor, not Paris).

kilax, but that's the Simpsons... it's all silly... and I loved every minute of it. I felt like a kid again.

That is messed up. I hope that the paper and the networks can drive the point home. I think that sports and entertainment folk make too much as it is for doing little that contributes to society.

While they might argue otherwise, I tend to agree with you.