Home Archives Profile Subscribe Links Rankings
Fox fur on my back, bow tie 'round my neck (cont.)...
It's gonna take a lot to drag me away from you...

The Autobots wage the battle...

Before I continue, I must apologize to my brother (who likely will never read this anyway) and my brother-in-law (who will). But when your wife, the least geeky person you know, says that she owes you for helping her study for an exam and is actually willing to go see Transformers with you and is still willing to go even after you give her multiple chances to opt out, you go. That's just how it is.

As for the movie... loved it. Yes, it's a big-budget, blockbuster-infused, popcorn-fest of a film directed by one of those men that serious moviegoers should never like (Michael Bay) because they tend to strip movies of their legitimacy as an artform, but I did. And I admit it proudly.

I really dug the plot and the way things were played out. Basically, it's a story about robots on Earth trying to find the source of their power that was lost during a war on their now-defunct planet. The Autobots want to stop the Decepticons not only from finding it, but from destroying the human race in the process.

One great thing is that they limited the number of Transformers on each side of the battlefield. I believe it was five each and that was about it. For the Autobots, we had Optimus Prime, Jazz, Bumblebee, Ratchett, and Ironhide. For the Decepticons, it was Megatron, Starscream, Barricade, Bonecrusher, and Frenzy. I remember all the Autobots as being part of the first incarnation of the series and the same goes for Megatron and Starscream on the bad guys side. Something about Barricade strikes a familiar chord. But, who the heck were Bonecrusher and Frenzy? I also think the boom box was supposed to be a shout out to Soundwave, although his actual name was never mentioned and the 'bot he transformed into was simply one of the grunt drones, so I'm not sure it was actually supposed to be him.

It was a bit too long in some areas and could've been edited down to shorten the overall two-and-a-half hour runtime. However, when the action kicked in, it was on like Donkey Kong. The battle scenes were intense, things got destroyed, the filmmakers were not afraid to kill both humans and robots, and the special effects were fantastic. Seeing Bonecrusher "skating" down the highway actually looked like it was real. And the film was clearly fun for all ages so far as I could tell from the little kid seated behind me cheering the entire movie. 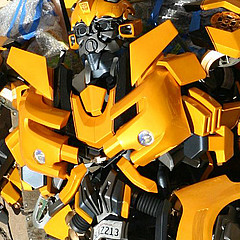 For a Transformers nut like myself (I collected the toys, read the comics to a certain point, and watched the cartoon), it was nice to see that they did maintain some aspects of the original storyline -- the Autobots did everything in their power to protect human lives, the Decepticons did not, Bumblebee (at right) was the first to make contact with a human, Optimus Prime was a truck, Jazz was a sports car, Starscream a jet, Ratchett an ambulance. But some things did change. Bumblebee was supposed to be a VW Beetle not a Camaro (yes, the filmmakers had a deal with GM, clearly, negating the chance to make a key character anything but a GM vehicle; although they did take a jab at their rival by making the bad guy cop car, Barricade, a Ford Mustang) and Megatron a pistol not some funky jet, but I suppose I can deal with these minor variances.

And then, of course, there was the game of who's who that could be played throughout the film. We had Aaron from 24 (Glenn Morshower), the wheelchair-bound guy from The Unit (Michael O'Neill), Alan from Dave (Kevin Dunn), Dave from What About Brian (Rick Gomez), Brian Austin Green's fiancee (Megan Fox), Mr. "Hello, Mr. Anderson" from The Matrix (Hugo Weaving), and Eddie Winslow from Family Matters (Darius McCrary), among a bunch more. It was a lot of fun to see who we could spot.

All in all, though, it was a fun time at the show. One I would recommend for just about anyone out there looking for high-octane fun.

Next up, ideally, will be Live Free or Die Hard. Woo hoo!

Thank you, sweetie, for once again catering to my inner geek... and enjoying it yourself, as well.

I think you may of a very rare breed of men who actually appreciates and loves his wife, and is not afraid to admit it in public. Very cool! Very sweet!

every time i read a post about the transformers the damn theme song gets stuck in my head.

Karl, I've heard nothing but good stuff regarding Die Hard. Hence why I now want to see it. I was wishy washy about it before. But now...

sizzle, sorry to make it worse.

Appropriate for kids, or no? My sons want to see it but I am not sure.

I'm not sure about Transformers but I must admit that I want to see Live Free or Die Hard.

tori, the kid behind me was about six or seven years old. He didn't seem phased by it at all. I don't recall anything negative other than a bit about Aunt Rosie and her five sisters.

Dagny, as blasphemous as this may sound, I was looking more forward to Transformers than Die Hard.

I LOVED Transformers - Jazz was definitely my favorite character in the movie. I agree that some parts were a bit long. Live Free or Die Hard is another awesome one. You should go check out 1408 as well - it's a goddie. Wow, I sound like a total loser with all the movies I've seen.

Live Free or Die Hard was non- stop action. The Hubs and I thought it was great. This weekend will be the Transformers.Sons 1&2 stood in line to see it last week. They keep threatening to tell Hubs the entire plot, so we have to see it soon!

Now I want to see Transformers even more than I did before. Maybe I should call in sick one day this week ;)

Elaine, we've seen just as many. However, not all were good. We also want to see Ratatouille.

Ooh...I'm excited. 1408 won out this weekend because of the lines. We have re-scheduled Transformers for later in the week :o)

If you are someone like myself who is painfully unaware of anything about the Transformers (other than the toys), would I still enjoy the movie? Sister saw Ratatouille and gave it a thumbs up...

Laurel, if it's any consolation, Katie only knew the toys via her brothers and she loved the movie.

You forgot Blackout. Remember? The helicopter guy? Turn in your geek badge tomorrow at my desk. You're fired.

Even if they didn't have a deal with GM, could you imagine a teenage boy wanted a Yellow Beetle? Yea, not so much. This movie kicked ass! Definitely one of the better films I've seen this year. Dare I say, better than Live Free or Die Hard. But then again, I always love when shit blows up. ;)