Home Archives Profile Subscribe Links Rankings
Wake up, dreamer, it's happening without you...
That our flag was still there...

There are occasional moments in a relationship when even the truest love is tested. The envelope stretched. Limits pushed. Patience worn.

When one of the participants in a couple is a geek, this happens more often than anyone would care to admit.

Take, for example, how geeked out I was over the news that a dozen 7-Eleven franchises across the nation and in Canada would be making a temporary transformation to Kwik-E-Marts in honor of the film version of The Simpsons coming out later this month. Granted the nearest one is in the South Side of Chicago (near Shelbyville, HA!), and I'm not too thrilled at making the trip in to the city to see it, I am still geeked over the fact that all 7-Elevens will trade in some of their standard products for Simpsons-themed variations.

Katie could've just rolled her eyes and chalked up yet another one to my inner nerd. She could've ignored me entirely. She could have shouted "ear muffs" and run around with her hands cupped over her ears until I finally shut up.

But what did she do instead?

She made a trip to the 7-Eleven near her work and picked up some of the goodies! 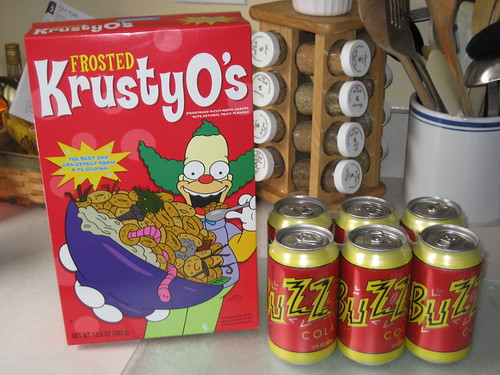 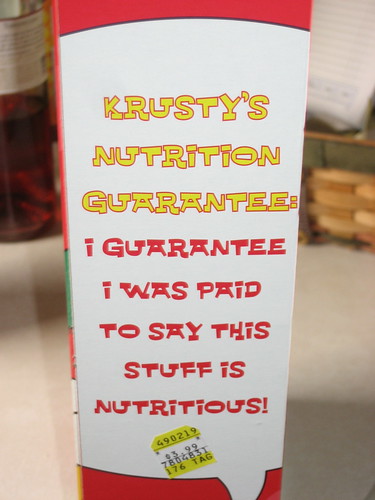 Happy Fourth of July to all of you... well, those of you who celebrate it anyway. I think this exonerates Bec, Nat, and Suze. The rest of you, go out and watch some fireworks!

What a woman! Happy 4th of July.

Uhmmm, there's being a geek and then there is having love for the best cartoon series ever (well in MY opinion). I am so in love with that stuff Katie got for you and now a little bit in love with Katie for getting it!

sooo awesome! i read that the 7/11's were transforming - i love it! they don't have duff beer, too, do they?

Hilly, no, it's pure geekiness.

Jenny, no Duff Beer. They wanted to, but opted to keep everything youth oriented since the movie is PG.

You're right - love is appreciating your husband's ultimate geekiness! :-p

like we really needed further proof of katie's fabulousness? ;)

I want some of that!

Bre, and I am definitely a geek in need of love!

Sandra, so go get some!

Bummer !!! No Kwik E Mart in Cleveland. I might just have to head out to Chicago and surprise my hubby.

I am so excited about the Kwik E Mart. Glad to see there are others. I did not know about the special products... I have never been so excited to visit a 7-11. Rivals the time when the Simpsons moved from the Tracy Ullman show to their own show!

August, well, you don't have to waste the money just for the products. Those are at all 7-Elevens. If you want the store, though, yeah, you'll have to come to Chicago. ;-)

Kim, yep, special products at all 7-Elevens, not just the special Kwik-E-Mart ones. Have a blast and bring lots of money. Welcome aboard, BTW.

Yeah man, I was super fucking pumped when I saw 7-Eleven revamping some stores. Too bad there aren't any in Atlanta.

Well, at least get to the stores and pick up some of the themed swag.

AW, Katie you are sooo sweet (not as sweet as KrustyO's but close!). The one labeled Washington DC is near where I work. I'll have to go and check it out. The lat time we went to a movie the theater had a life size plastic Simpsons sofa (complete with characters) I tried to take a couple pictures of my girls sitting on the sofa using my wife's camera, they didn't come out so well.

Enjoy your Buzz cola and KrustyO's (I hear they go well together), and Duff Beer???

Nope, no Duff Beer. Since the movie is rated PG, they wanted to keep all marketing matter geared toward kids. They said it was a painful decision as Duff Beer is a very logical choice, but they had to err on the side of childrendom.