Archives Profile Subscribe Links Rankings
Every one of you is fired...
Plug me in...

His skin is green, but his mood is blue...

You would think that being an American male I would have an innate love of all things Thanksgiving. Heck, if there's one character trait hammered home by popular culture, it's that any holiday involving food is a favorite of men.

Sorry, not so much for me. Never cared much for it. Thanksgiving always seemed like a misnomer of a holiday to me. Kinda like Columbus Day, which is meant to celebrate the man who *cough* discovered North America and became a *cough* friend of the native peoples. We all know that, despite our grade school education, this entire image of Christopher Columbus is a load of crap. He wasn't even close to being the first one to discover North America and he was anything but kind to the natives.

That's how I view Thanksgiving. The image of Pilgrims and Native Americans sitting down side by side and enjoying a meal together always struck me as being too much of a stretch of how I perceive the reality of the situation to be. Maybe there isn't historical evidence to support my alternate theory, but it all still feels, well, wonky to me.

When you combine this historical skepticism with my continued quest to lose weight, you'll understand why I'm no friend of Thanksgiving.

But there is one good thing to come of the holiday this year... for the first time in a long time, Katie's not cooking the feast and we're not hosting the get together! Oh, it feels so good. We're actually going to spend the holiday with her family. We usually host it for my family, but we wanted a change this year. I think Katie is feeling a combination of relief and anguish. It's a relief to not have to worry about it, but then we watch shows on the Food Network and they're all about Thanksgiving right now, so she starts to feel like she's missing out to some degree. It's a painful mix for her.

What are your plans?

Totally Unrelated Aside (TUA): When I can find well-done schlock films, I tend to love them. Great stuff like John Waters' Cry-Baby make me feel like all's right with the world. 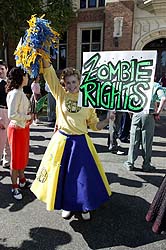 This is why I've been loving the short film Zombie Prom. It's schlock, pure and simple, mixed with comic art and a lot of singing.

Basically, it's the story of an idyllic little American town in the 50s whose world is changed by the arrival of an outsider, Jonny ("without the customary H"), who doesn't buy into the societal norms. At Enrico Fermi High School, he falls for a girl named Toffee but she dumps him because her parents do not condone of their relationship. So, in a fit of atomic adolescent angst, Jonny hurls himself into the cooling tower of the nearby Francis Gary Powers nuclear power plant and he returns as a zombie... a zombie who still wants to take Toffee to the prom, no less.

It's best to think of this film as what would happen if Cry-Baby, Pleasantville, The Mask, Grease, and Creepshow were all thrown in a blender and the puree button was left on for way too long.

Oh c'mon! This is great stuff! And it was free on iTunes when I downloaded it. While it's no longer free, it's still only $1.99. How can it get any better? Oh yeah, here's how... the line "This isn't about civil rights. This is about protecting the traditional values that made this country great" being uttered by none other than RuPaul. Yeah, that's right. Ru-friggin'-Paul ranting about traditional values.

Thanksgiving just hasn't been the same to me since my Grandma passed away twenty some years ago. The holiday was all about food and family and food and getting together and food. Did I mention food? She was a fantastic chef! Yes, chef. Not just a cook, a chef. Hmmm. Me thinks I have the thoughts of a blog post. Check my site tomorrow for the rest of the story. ;)

I do like the idea of the holiday, being thankful for what you have and all that.

P.s. I feel your pain with regard to the eating part. Last year I only gained 4 pounds over the entire holiday season, because I kept the pie to a minimum and portions smaller. Good luck with that this year.

I have been patiently waiting for someone to mention the myth of Thanksgiving. Thank you. And tell Katie that she can still do a little cooking, just not the whole feast. Oh, and you might not want to look at my blog until sometime next week. Don't say I didn't warn you.

Lisa, will do. Nothing like a good chef on Thanksgiving, eh?

g-man, oh I like the whole giving thanks bit, too. But the happy group of Pilgrims and Natives eating together? Not buying that so much. I'm going to try my best with the eating lighter bit. We shall see.

Dagny, was that a "patiently waiting" as in you're expecting someone to be a skeptic or you were sincerely hoping someone would point it out?

You mean the Pilgrims and the Natives didn't sit round a table together? You mean it's all a lie - next you'll be telling me Father Christmas doesn't exist...!

i rather like thanksgiving but really for the togetherness, not what it stands for. i'm hosting a few of my friends tomorrow but now i'm trying to kick the beginnings of the cold that arrived today.

You're welcome to celebrate Canadian thanksgiving. Nothing about the pilgrims in that one... Of course, it was last month.

Happy non-Canadian thanksgiving to you!

Just like Santa Claus, Thanksgiving is a fraud, at least insofar as the Pilgrim/Indian myth. That said we can at least dream that there was historical legend associated with now having family/friends over for 4,000 calorie meals. For me it is a 26 lb. turkey that begins cooking at around 10 AM.
Hope you and others here have a good one.

Bec, I would never say that about Father Christmas. If I did, I'd get coal in the ol' stocking!

sizzle, thanks about the layout. Same as last year's but with a new photo. I agree on the togetherness factor. That's what is important.

suze, I'm not quite sure what Canadian Thanksgiving is aboot (must see this week's How I Met Your Mother for that one).

Nice new header! I was surprised by the blue, but I bet I will get used to it.

I usually dislike Thanksgiving. Too much food and too much annoying family. But this year we are hosting it for friends at our house, so I am excited.

Hope you have a good day :)

Love the new style!
I'm with my folks in Ohio, but we've made reservations to go out to dinner tonight. I'm so glad--really cuts down on the stress and frustration!
Big/more traditional dinner tomorrow with my aunt, cousins, and the little ones.

kilax, the blue's not so bad. It's what I used last year this time. So how'd Thanksgiving go?

diane, thanks! Reservations are so nice. So much cleaner. Eat, pay, run. That's it. So good.