Well, me. Back in the day when watching these sorts of films was commonplace for young men, it would've been nice to legitimize the affair a bit by being able to claim that these films bordered (and I use that loosely) on art.

I've actually already got several ideas in my head. No, the other head, you pervert. The one north of my shoulders.

But the problem is that I am a married man. I hope to have kids some day. And I'm a professional in the tech industry. So there really is no way I can legitimately use my real name when writing these scripts.

I'd also like to know... if you were to do something similar, what would be your nom de plume? 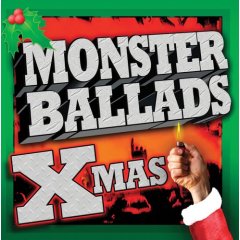 Totally Unrelated Aside (TUA): Today's sign that the apocalypse is on us comes in the form of a CD that I picked up at the library last week. It's titled Monster Ballads Xmas and features many of the great hair bands performing holiday standards. Check some of these out...

Wow. I just don't know what to say other than I can't wait to hear this one!

On the topic of music, got a meme for you in the extended post.

The iTunes Meme! from Dave at Blogography:

Sort by time - shortest and longest...
"Interlude (Let's Dance)" by Janet Jackson at four seconds and "A Long Day" by Polyphonic Spree at 36 minutes, 31 seconds.

Sort by Artist - first and last...
a-Ha and 1990s. Not sure who the last one is. Must be part of some compilation.

Top five played songs...
I never really listen to songs through iTunes. It's always on my iPod so I'm not sure how to measure that. The top five on iTunes are ones that Katie listens to more when she's at home on the computer. We have four songs by Rocco DeLuca and the Burden -- "Colorful" (#1), "How Fast" (#2), "Speak to Me" (#4), and "Gravitate" (#5) -- with Rascal Flatts' cover of "Life is a Highway" in the middle at #3.

i'm feeling so uninspired creatively speaking. how sad! i will keep this in mind and get back to you.

Bec, too early??? Aren't you something like 7 or 8 hours ahead of me? And, no, haven't seen the Spree live although they are coming to town soon. Don't know if I'll go, but we'll see. How's their new album? I haven't heard it yet.

Dave, oh that's a good one!

I have no suggestions...but I am extremely excited about the Hair Metal Christmas cd!! I've been waiting since 7th grade for such a collection!

I like the "middle name, street you grew up on" formula. I would tell you mine, but you'd find a pretty nasty Penthouse-forum-style story. :)

if i did that formula, mine would be fluffy franklin. of course, i think just the single name 'hilly' works!

diane, you really had an odd childhood, didn't you?

ajooja, Odie, and Hilly, Wayne Filkens by ajooja's formula and Tippee Filkens by Odie's formula. Not a fan of either. I need something better than that. Good thing I kept reading because for a second I was thinking Hilly's middle name was "Fluffy." Ajooja, we need that story! ;-)

Not that it makes a difference, and not that anyone cares, but just to give credit where it's due: the Enuff Z Nuff song on Monster Ballads is, in fact, an original. (It's a small distinction in a sea of covers.)

Abbey Road was my first album by alpha also.

As for if I were to do something similar... well, that's a conversation to have in person sometime. ;)

Aren't you supposed to do something involving a street name and your first pet?

p.s. I like the new header, and the wintry sidebars.

I say you should just Kapgar... It works. But the street/first pet thing is something I've heard before.

I was so hoping your pet's name was Filkens!

Filkens just may be the naughtiest sounding word that isn't.

I would go with Wayne Filkens, it rolls off the tongue better than Tippee (nice spelling of that, by the way.) Zaba says there's no such human in the U.S. named Wayne Filkens, so it's not like you're going to ruin someone's reputation. But just to be sure, you might want to try on DeWayne Filkens for size. The additional syllable makes it extra porny.

ajooja, the more I think about it, the better it sounds.

Hilly, bummer, that would've made for one heckuva birth certificate.

Jules, that's cool. Thanks for letting me know as it was the only one I couldn't mentally come up with a tune for having not yet listened to it. But leave it to you to know all things Enuff. ;-)

claire, you're gonna make me wait, aren't you? And thanks about the design.

Jake, what kind of kid comes up with Filkens as a pet name? Poor kitty, doggie, hamster, etc. Tippee is certainly a unique spelling. And DeWayne is niiiiccceeeee.

I'm late to the party! I don't think anything tops 'Long Duk Dong' from "16 Candles."

sue, that was Katie's reaction. Exactly.

metalmom, I'm of the opinion that might be copyrighted.

I'm not sure if you know just how much I love any and all Christmas music, but the concept of the CD you posted? Made my morning.

Sandra, I still haven't listened to it. A bit scared in all honesty. Nice pen name, BTW.

K~ I mentioned this privately, but think the world should vote - I think you should go with Gavin Perak. It sounds just sooooo normal, and yet, slightly porny. Gavin is just such a wanker's name!

Krys, nice anagram. Works well. "Wanker"? Been hanging out with your British friends a bit much, eh?

Hey, I have that CD! It rocks, except I don't like Faster Pussycat's take on Silent Night.

By the way, the Danger Danger song is also an original, playing off their "big hit," Naughty Naughty.

I need to hook you and Juliette up. You'd have a lot of rock to talk about. She used to run a metal magazine and interviewed a bunch of them back in the late 90s.