Rollin' with my homies...

Apgar is not a very common last name. Sure, we've met a few people here and there with the same name. But it's very rare that this happens. And, of course, everyone who has encountered multiple people with this last name automatically assumes we're related.

And aside from Virginia Apgar, the doctor who created the Apgar Score for rating babies upon birth, there are no famous ones. We're all just waiting in the wings for our moment to strike out and unleash our full potential on the world.

Oh yes, it will happen. Just you wait and see.

I've been planning the day for years. And I couldn't think of any other Apgar out there that was ready to make the move. 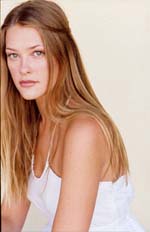 So imagine my surprise when, as Katie and I were watching the opening credits of this week's episode of Terminator: The Sara Connor Chronicles, we saw the name "Kristina Apgar."

Of course I had to look her up on IMDb.

Turns out she's the blonde on this past week's episode that John appears to be developing a little crush on. Well, a crush that's on a female of the non-cyborg persuasion, that is.

Oh this just isn't right on so many levels. My plan is failing miserably! Not only is she an Apgar who is making a move on the Hollywood machine, but she's a Kapgar, to boot! And she's more than a decade younger than me. If you combine that with the fact that women outlive men, her reign of Kapgarific tyranny will be much longer than mine!

Not fair at all!

No, wait. I'm thinking about this all wrong. If the Kapgar Reign is to be effective, responsibilities must be spread out amongst capable agents. And, clearly, Kristina has her talons on Hollywood.

I should use that to , er, our advantage. She works in Hollywood, I work on the cyberworld, and Katie works on the education system. We've got almost all bases covered!

The world is our oyster... time to shuck!

Totally Unrelated Aside (TUA): So we bought four new tires for Katie's car today. An expense we'd rather not have, but needed to be taken care of.

Gotta love when we get home and, after shoveling the driveway, notice that Katie's car is leaning heavy on the passenger side. Then we find out it's because one of her brand spankin' new tires is completely flat.

Needless to say I heard words come out of my wife that I haven't even heard from the foulest truckers imaginable.

The kicker is, they're not open again until Monday.

Jan 25
So how's this strike you for a good night? Katie and I return home from a night at the gym (anytime you walk out of a gym on your own two feet and not a stretcher is a good start)...
Next Post

You're my best friend...

Jan 27
Throughout our lives, we have many friends. But how many so-called best friends? Very few I would guess. I think I can pretty much count them on one hand. But your first best friend (I know some of you hate...

I feel ya. Not only are there a bunch of enterprising Claires out there with eponymous businesses, there are even Claires that share my surname who are more accomplished/known/what have you than me.

diane, German. When it's spelled out all the way, it's much easier to tell.

Yeah, being a Claire is one thing. Having the same last name is something else entirely.

When I google my name all that comes up are doctors, artists and pyschologists - y'know, real low life's!

All you need is a kapgar in politics and then you're laughing!

That's exactly what I was thinking! Actually, there is a Kevin Apgar in the National Parks system and one that plays in some band in Cleveland, I think. So now parks and music are covered, too. It's funny, because for some time, my goal was to get my name higher than the Parks guy in Google searches. Took me a couple years, but I did it! I was obsessed. Clearly.

As I catch up on the weekend's blogs, I almost fell over! I just bought a new tv and when they delivered it, i got a survey to fill out.It was signed...wait for it...

Didn't you say you had family in that neck o' the woods?

metalmom, that's almost a kapgar. Capgar still sounds the same, right? And yes, lots of that name in NJ. Actually Kristina is from there.

Keep it up and you're getting deported to Sweden.

"Kapgar deported to Sweden. Claims he's not from there."

I'm assuming that's where you were going with that.

There are worse things in life than discovering that you share the last name with a hot Hollywood celebrity.

I will grant you that.

Recent blog post: Who cut off their tails with a carving knife...