Falling apart at the seams...

I like to think I live my life by the Golden Rule. That is the one that reads "Do unto others as you would have them do unto you," right? I hope so.

There are those people that deserve to be treated nicely who you want to treat you nicely in return. There are also people whose day you try to improve by being nice to them even if they've treated you poorly because you see some glimmer of promise about them. Something that says, "this piss-foul attitude of mine would be deep six'd if only someone gave a damn." Once in a while, it's nice to be the damn-giving sort.

Don't get me wrong, I'm not like this with everyone. That's asking a bit much, don't you think? Some people just deserve to be treated like dungheaps. So I bite.

But what I don't get is when someone who is doing something nice for someone else has the world rain shit upon him/her.

I got into a conversation with a guy yesterday who was walking around on crutches. Naturally, I asked what happened. He said around Christmas he and his son were loading a washing machine into a truck to take to Goodwill or some other donation service. Good thing, right? It's not as though he was dumping a bad machine on others. It was a working machine that they just decided to upgrade.

While loading the machine, he was on the ground pushing while his son was in the bed of the truck attempting to pull the machine upward. This guy hit a patch of ice and fell to the ground. He bashed his head on the concrete and the machine fell on him breaking his lower leg in six places. As a result, he has been forced to cancel his non-refundable annual ski trip with his sons.

How is that a form of positive karmic payback for doing something nice for a fellow human being? How did this guy deserve to get dumped on like this?

I guess when it all comes down, the Universe prefers "No good deed goes unpunished" to the Golden Rule, eh? What a load.

Totally Unrelated Aside (TUA): All I can say about this picture is "holy crap." 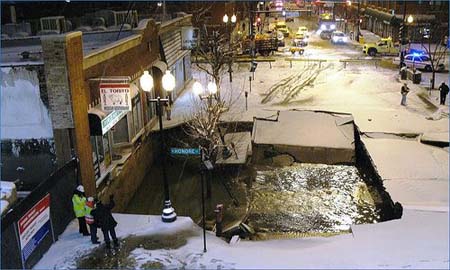 It looks like a movie set. But, in fact, it is the result of a water main break on Montrose at Honore in Chicago that happened really early this morning.

I wonder what good deed residents in this area were trying to do.

Could be that he was going to do a Sonny Bono, Karma saved his life!

Holy Crap is right! (and what I said)

Ooooh, I heard about the road collapse this morning, but hadn't yet seen a picture. Wowzer! So much for wanting to live in Lincoln Square!

Oh now, you never know. I kind of like to think that things happen for a reason (because so many things happen to me.) Maybe something worse would have happened if he had gone on the trip?

i agree with kyra. sometimes we can't see how it all connects until much later. like what feels like a bad thing (breaking a leg, canceling a non-refundable ski trip) could end up being a good thing. a person he meets by staying in town changes his life course or something. you just can't know. you just have to trust that everything happens for a reason. and those reasons aren't always bad/punishment.

at least i hope so.

g-man, that is such an odd thing to see, isn't it?

Nilsa, I'd still want to live there, just not right there.

sizz and kyra, considering all he's giving up (money, mobility, comfort, etc.), this had better be a heckuva payout.

I'm having an issue with Karma at the moment. I am hoping I'm getting all this bad nonsense at the moment for a hell of a payout later!

Karma's been quite the bitch around here lately. Guess it's my fate!

Bec, yeah, you're gettin' hit pretty bad. I hope you get some karmic justice soon!

Lisa, you're telling me!

I hope *I* didn't do it, because that's right at the end of my street!! (I'm very, VERY lucky though that I don't have a car and had no issues with my building, water, etc).
Nilsa, I wouldn't diss Lincoln Square on this count--it's a beautiful neighborhood, I've lived here for 8 yrs and that's the first time I've had a water main snap. :)

Typical. Stuff like this happens to me when I try to do something nice... and I never learn. :-(

diane, holy crap! That's right by you??? That had to freak you out! It freaked Katie and I out just to read it.

Dave, it's a sign that you should live the rest of your life as a selfish bastard! ;-)