Damn it feels good to be a gangsta...

Do you remember that scene in the beginning of Office Space when Michael Bolton is sitting in traffic with his car stereo pumping out some gangsta rap and he's just jamming to it with no abandon? Until, that is, a black guy asking for donations comes walking by. At this point, Michael composes himself and turns down the stereo so as not to bring any attention to himself and his antics.

He's not the only one who acts this way. I don't necessarily mean this as a class delineation by any means. I just mean we worry about how people in other cars see us when we're driving or stopped beside them. The scene from Office Space was just a good example of someone reacting to his surroundings and altering his behavior.

I'm guilty of this as well. I'll be rocking out to music from my iPod in the car, singing out loud and bopping my head or thrusting my fist in the air in some constrained form of musical revelry. Until I'm next to someone else, that is. Then it all stops. I don't even know why I do it. It just happens. Totally unconscious physical reaction.

Why are we so self conscious around our fellow drivers? Why is that we give such a damn about people that we're likely to not personally know and not likely to ever see again?

And it's not just how we react to our music. I've observed as others carefully and stealthily consume their meals, and do other things, while driving. Heck, even I do it (eating, not the "other"). But, when you're eating something that looks like this, you might do the same... 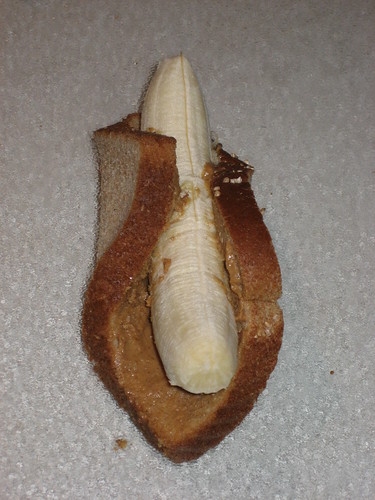 Katie and I call it the "banana burrito." It is simply a piece of bread with peanut butter spread on it wrapped around a banana. Totally phallic looking, yet delicious. Even worse than the appearance that results from eating just a banana.

So I'll forgive myself for hiding this little gem as I eat it.

I purposefully sing and chair-dance while driving with hopes that I am freaking out the other drivers. This morning Jay-Z came on the radio while I was pulling into work so of course I cranked it.

Oh, and I only eat phallic food in public when I am trying to get some guy to pay for my drinks. What? It works.

it's both phallic and vaginal. amazing! :)

this one time my friend and i were rocking out to some me first and the gimme gimmes when we looked over at this car full of hot guys. they smiled at us, gave us the thumbs up and we went on rocking.

that's how it should be!

unless someone is picking their nose. people shouldn't publicly pick their noses. just, ew.

That looks so good I can't even tell you.

I'm doing low-carb right now -- because I'm a fat tub of goo -- so there's probably not anything on the banana burrito I can eat. Mmmmmmmmmmm.

Oh, I totally love watching people rock out in their cars. What gets me is the people who have their iPods on. Seriously peeps, get with the times and put a boombox in your car or something (do they still call them boomboxes?) because you're just asking to be in a car accident or be car-jacked.

Listen to me being all motherly.

Mmm. Peanut butter sounds good. That sandwich would be good with a little drizzle of honey.

My problem is that I don't stop when people roll up next to me.

Now *that* is gangsta!

Dagny, I'm not trying to get a guy to pay, though. So doesn't help me.

Well that would help to some degree. ;-)