Home Archives Profile Subscribe Links Rankings
Gonna write you a letter...
It's time that you won...

Killing in the name of...

I hate admitting to this sort of thing because, 1) I fear that I'm going to be flamed mercilessly, and, 2) it makes me feel severely un-American. But here we go anyway.

Once in a while, I will watch some movie that is considered to be a "classic," one of those films that defines cinema as an art form. I'll watch it and... I'll hate it.

It's very rare that this happens, truth be told. But when it does, there's nothing I can do about it.

This one makes me feel particularly bad because I generally love films by Alfred Hitchcock, I'm a fan of Cary Grant, and this film fared pretty well in the AFI Top 100 (both times). 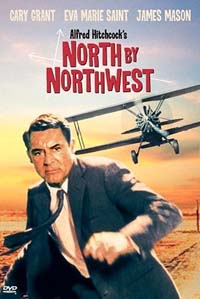 I'm sure you've guessed by now, but the film in question is North by Northwest.

This was a movie I've been wanting to see for years. Literally years. To break it down, Cary Grant stars as Roger Thornhill, an advertising executive who is mistaken for somebody else. This mistaken identity leads him on an adventure to clear his name and regain the life he knows.

Sounds great, doesn't it? Well, it fell completely flat to me. The acting was strained (to say the bad guys are even two-dimensional is a stretch), there was no chemistry whatsoever between Grant and his female lead Eva Marie Saint, the plot was disjointed and lacking any sort of flow, and,  Jesus, talk about abrupt endings.

When this sort of thing happens, I typically question whether I was just not in a mood for this particular film. A good way to confirm this is to find out what Katie thought. If I was not in a mood for it, she likely would've enjoyed it and then I would give it a second chance. Yet, after watching North by Northwest, we just looked at each other and shrugged our shoulders. It did nothing for either of us at all.

The only other time this happened to me with what I consider to be a legitimate classic was Gone With the Wind. It's been a while since I've seen it so I can't really remember why I didn't like it, but I just didn't.

Two film classics and I didn't like either. I'm going to Entertainment Hell, aren't I?

Update: Allison helped to remind me that there is actually a third "classic" film I hated... Breakfast at Tiffany's. The movie made no sense whatsoever. That's three. I'm gonna burn.

Totally Unrelated Aside (TUA): The other night, after receiving about my fourth or fifth notification that someone is "following me" on the Twitter account that I set up last May and never used, I decided to finally log in and give it a fair shake.

Jesus, you people are all over that damn site, aren't you? This was during some clearly orchestrated attempt by the Twitter community of people I know to all watch the President's State of the Union address and provide Twitterized commentary on it. At first, I set up my cellphone to receive notifications of updates. Within an hour, I shut off the notifications because my phone was going nuts with text messages.

But I am intrigued by this whole pseudo chat room styled means of keeping in touch. So I'll keep playing. And if any of you would like to follow me and be followed by me in return, visit my Twitter page (the link is also in my left menubar - second row under "Personal").

See, now, I just can't figure out the appeal of twitter. So, I never really made one. It's kind of creepy too, if you think about it.

Twitter is probably my favorite application out there right now. I say "right now" because I am sure I'll be over it just like I got over Facebook :). I like being able to spew the little mundane deets of my day and hear that someone actually finds that shit worth talking about!

But it's like a car wreck. You just kept watching to see what would happen, didn't you? lol

I totally forgot about my Twitter account until you reached out and reminded me the other night. Guess I'll have to go check it out again... if I can remember my login. :P

Haven't seen 'North by Northwest', but from my perspective, Cary Grant was always sort of stiff in his movies. The one I didn't get was 'Maltese Falcon'. Have never managed to sit all the way through 'Gone With the Wind', but loved 'Dr. Zhivago'.

As for 'twitter', never heard of it until Monday. (I know, I live in the dark ages!)

I think I've twittered twice this whole week so far. I'm sort of done with it, I think.

I fell asleep during North By Northwest when it was on at Christmas. I tried. I realy tried to stay awake!

I love my Twitter... I love the fact I can Twitter from my phone while I'm out and about!

oh dear god that means i will be sucked into twitter too. i've been trying in vain to resist but if gchat is so 2007 then i suppose i have to move on, right?

i didn't like north by northwest and i love hitchcock. and gone with the wind is just too damn long (but i like it).

One of the guys I graduated high school first got his start at Google and Odeo and is now a big wig over at Twitter. Goggle (ha - Google) him: Biz Stone.

Kyra, it is a bit creepy and I'm still figuring out its value, if any. But I'm trying. Gotta at least try.

Hilly, we always find your shit worth talking about!

Lisa, remembering old logins is always the worst. Yeah, we watched the whole thing hoping it would get better. It didn't.

Odie, you're probably better off not knowing about Twitter. I still have to see Dr. Zhivago. I should Netflix that one.

diane, didn't take you long, did it? I wonder how long others will last too.

Bec, I've been doing that too. But all the alerts were just too much. BTW, we were fighting to not fall asleep as well.

sizzle, okay, I'm not feeling so bad. Thanks!

Nilsa, I actually know the name Biz Stone without Goggling (heh) him.

I'm with you on the classics. There are a bunch that I have watched and hated... Most notably Breakfast at Tiffany's and Citizen Kane. I found both unbearable boring (feel free to insert whatever unamerican name-calling you'd like now).
As for GWTW, I'd venture to say you probably thought it was too long. There is SO much of that movie they could have cut out to make it flow better. I realize they were trying to stay "true" to the book, but GEEZ did that movie drag!

Allison, yeah it did drag. Although I did like Citizen Kane, I totally agree with you on Breakfast at Tiffany's. I disliked it immensely. If I'm going to watch an Audrey Hepburn film, give me Roman Holiday or Sabrina.

I didn't mind North by Northwest that much... but roundly HATED Gone With The Wind. What a bloated turd of a film. It may be considered brilliant for its time, but the crappy over-acting alone makes me want to vomit at the thought of having to ever sit through the film again.

I did a post about classic movies I hadn't seen a couple of months ago and "North By Northwest" was one of the movies I decided to see.

Like you, it just didn't hold up for me. There may have been a time it was a great movie, but that time isn't now.

The "Bourne" movies, for instance, tell the same kind of story in a much better way. Better acting. Better production. Better effects.

I don't know why I have to feel bad that modern-era movies are better than most of these so-called classics.

I haven't even tried twitter yet because I just don't have time for another thing! Everyone seems to love it though and I admit to being curious.

Dave2, the overacting kills me. It's too much for any decade or century for that matter. Gah!

ajooja, feel no shame about it. Bourne kicks ass. Thankfully, they updated the original novels or it, too, would've been dated.

tori, it was that same morbid curiosity that sucked me in like a black hole.

You know, I find a similar phenomenon when I attempt to read a lot of classic books. "Red Badge of Courage" bored the ever-loving snot out of me. So did "The Scarlet Letter." I feel like a total clod, not liking the classics, but that's the way it is.

Karl, I had that problem reading classics in high school. I'm sorry, but Shakespeare means nothing to a vast majority of kids and teens. They just don't truly get it. I've since developed a liking for Shakespeare but I agree that I don't necessarily like all "classics."