Way back at the end of June, I posted about the wonder that is the "Shared Items" feature on Google Reader. God was it that long ago? Well, about a month ago, Google quietly released an extension of this application in which you were automatically hooked up to all your fellow Gmail contacts that also used Google Reader and could see what they were "favoriting."

While this new feature has not been without its detractors (what they're "sharing" that they're worried about others seeing is beyond me), I gotta admit that this has made me even more hooked on Google Reader. I love seeing what you all are reading and loving and, as a result, discovering all these new sites.

For example, Dagny's shared list introduced me to SFist. Since I'm already an avid reader of Chicagoist and a lover of the city of San Francisco, I suppose it's only natural to love that site as well. So thank you, Dagny!

Hilly has also shown me the wonder that is Cinematical. For a , er, movie addict like myself, this site is awesome! Thank you, your Hillyness!

But, then there's Bre... oh Bre... I started reading her shared articles only to discover that a vast majority of them are for some site called CRAFT Magazine where people either put up instructions for artsy crafty sorts of things or links to where they can be. I immediately began having nightmares of the clouds of glitter and waft of glue that permeated my parents' basement for years after my mom took up stamping and scrapbooking. I wanted nothing to do with it.

That's when I started paying attention and discovered what a complete and utter geekfest CRAFT Magazine has the potential to be. Check out some of these gems... 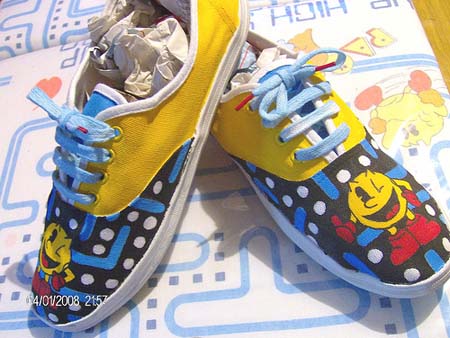 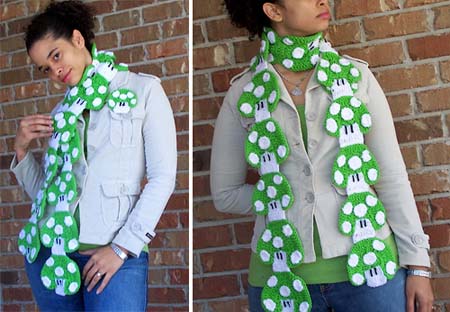 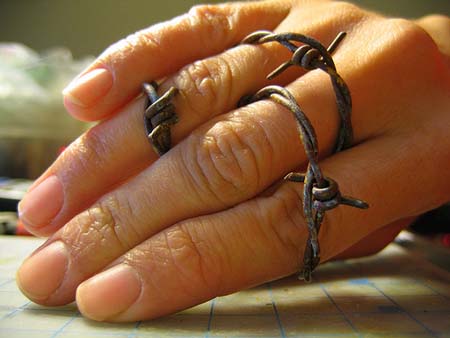 How to make my own barbed wire???

This is a craft magazine! You've gotta be kidding me. This stuff is just plain cool.

Not that I'd ever learn how to crochet, mind you. But I might try the barbed wire just for kicks. If nothing else, this is simply fun to look at to see how creative other geeks can be. No, not all of it is geekified, but I can tolerate scrolling through all the "normal" stuff to find gems like those above.

Damn you, Bre! You're ruining my chauvinistic, tough-guy image! ;-) 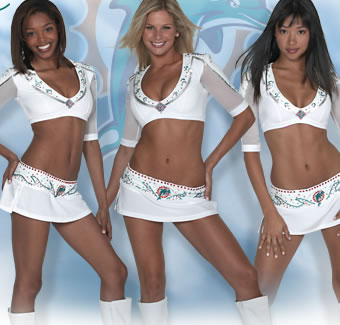 Okay... masculinity re-established... feeling much better, thank you.
(I think this is the third time this picture has shown up on my blog now)

Totally Unrelated Aside (TUA): I need you all to be honest with me about the "Sell Me Out" typelist at left. Does the fact that I have iTunes ads in the left bother you? I know advertising is roundly loathed in the blogosphere, but I'm not trying to really make any sort of money here. The purpose of signing up with Linkshare, initially, was so I could directly link to songs and albums in iTunes. Then they started sending me opportunities to link to some other cool stuff using the little button ads and I thought it might be stuff you all would want to see or be interested in. The money I would make on this stuff is so minuscule anyway. If it bugs you, let me know and I'll ditch the buttons. Be honest.

I too have gotten hooked on Cinematical thanks to Hilly.

OK, look, I put adsense on my blog finally after enough people pestered me about it. I make about $50-100 a month just on my site, no joke. In my mind it pays for the increase in gas prices. ;) It's not a big deal, and every little bit helps right now (especially with the evil school book publishers.) So why be worried about it?

BTW - those girls at the bottom? I bet you could find a craft project that shows you how to bejewel their outfits. All Martha Stewarty and everything...

I find it ironic you spend a whole post writing about Google Reader and then ask us if we care about something in your menu bar. Ummm, if we're reading you from Google Reader, we can't see your ads anyway!

Love the picture of the three babes. Mmmmmmmmm.

I don't mind the iTunes ads at all, mainly because I don't see them as ads. I see something I like, I'll click. I don't think of it as selling out.

The iTunes ads don't bug me one bit. As long as they don't blink I'm totally cool with them :)

i love the share option of google reader and i'd have to admit it is mostly because of Bre! she's made me an addict of too many sites. damn you Bre! ;)

truth be told, i don't spend a lot of time on your actual site since i just pop over to comment. the ads don't bother me. at least they are for music. that i can back.

I love the 1UP scarf but never get a chance to wear scarves! But yes, Google Reader shared has totally opened my eyes to new things and I love reading random posts from friends of friends too.

And no, you're whoring doesn't bug. Hell I hardly even noticed!

Well, I figure it's blogger Karma cause you're the one who introduced me to the "share" button on GR anyway!

I don't see any iTunes ads so maybe my browser is blocking them. :)

Nilsa, I never thought of it that way. Funny.

Elaine, if they blinked, I never would've even considered the things. Gah!!

Hilly, not much use for scarves in SoCal, is there?

nicole, not underneath the CD covers in my left menubar?

Nah, you're not bugging, dude. I'll have to re-check out Google Reader. I haven't used it in a while.

Ads are ok with me as long as they are unobtrusive and don't make my eyes hurt.

I was just editing feeds today in Google Reader and stumbled onto the share thing. I have to admit, as much of a Google cultist as I proclaim to be, I know little about Reader's abilities.

Thanks for convincing me to be less productive at work, this is why I love you. :)

I agree with Nilsa. Ha ha. I had to come over here to see what you were talking about.

Honestly, I think ads (in general) are a bit lame, but even I have thought about putting some up. They definitely don't bother me... they just feel wrong. You know? Like Elaine said, as long as they are not blinking or obnoxious, whatever. :)

Nat, do these make your eyes hurt?

Dustin, anything I can do to help!

kilax, what kind of ads would you consider adding to your site?

I mostly read the feed, so the ads don't bother me. They look pretty good though... I'd consider putting them on mine. Heck, I could use 5 cents. :)

As for google reader, I'm quite fond of it. I'm still getting used to the share feature. You alone are significantly increasing my # of posts to read each day. Ahem. I'd say be a little more selective, but then you'd probably skip the thing I'd find cool.

claire, occasionally I just find a flurry of cool stuff. Then it dries up again for a while. Sorry. ;-)

Hilly seems to be my only friend who's sharing! What gives?

As for the ads, to be honest I'd not even noticed them. I just read, respond, and take off.

Oh. I totally forgot to say thank you for the shout out. Bad manners on my part. But SFist makes me laugh on a daily basis so I just have to share.

But the real reason for this second comment is that I took a careful look. No ads visible here. Hmmm...

Your ads are totally unobtrusive, and that's all I ask for. Although, I hate iTunes right now since I can no longer download music from them. Stupid Windows 2000.

Lisa, that works too! You can always invite some friends to Google Reader. They have a feature in there to invite. Give 'er a go.

Dagny, you're in the same boat as Nicole. She thinks it must be a plug in with her copy of Firefox on Vista that blocks certain ads regardless of if they are pop ups or not. I've checked them on non plug-in enabled copies of Firefox 2 (Mac and PC) and MSIE 7 (PC) and they show fine. No problem on the shout out.

Brandon, I can understand the frustration, but I can't believe you're actually still running Win2K to this day. Wow.

Ok, I am still not on google reader. Guess I'll have to try that one of these days ;) but forgive me.. .I'm slowly easing my way back into blogging.

You are still alive!!

Ads don't bother me at all unless they make music start playing when I open your page. That sucks because then I can't pretend I am paying bills over here while everyone waits patiently for me to finish "my work" to do something for them. Otherwise, who cares.

I am going to need to check out that craft magazine thing. How cool!

I hate autostarting music and it's one of the reasons I'm not a big user of my MySpace page. Ick.

Thanks for sharing Bre's shared link! I don't mind ads at all, because most of the time I use Google Reader. Oh, and I'm pissed that we can't use iTunes here in Singapore. What a total rip-off!

The ads don't bother me as long as they don't slow up the site loading. So far, so good.

sue, shouldn't slow anything down. In fact, the one sidebar app that was slowing everything down (the Flickr box) has already been removed. I've noticed my load times have improved dramatically as a result.