Archives Profile Subscribe Links Rankings
Killing in the name of...
The weather outside is frightful...

This sort of crap just sucks. You join a park district sports league, you pay your way in, you practice with the team, then you injure yourself and wind up out for a couple weeks at the start of the season. 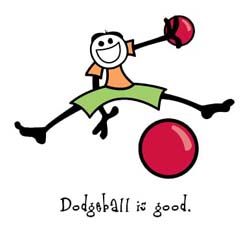 That's just what happened to me. I joined a dodgeball league with a bunch of my softball teammates only to wrench my side last night in our first real game. I had actually hurt it a little bit the week prior during a practice, but it went away and so I thought I was good. Guess not. I was twisting for a throw when I felt my side, just below my ribcage, rip on me. Not literally rip, mind you. Just that "oh crap! It's not supposed to do that!" sort of thing.

One of the bad things was the timing of it all. Not just because it's the beginning of the season and you miss out on that critical "gel" time with your new teammates and just have to sit back and watch them as they begin to become a team without you, but also because I was still in the game and couldn't sub out. This particular match up came down to a two-on-two faceoff and I couldn't really throw without hurting myself worse. I just had to move gingerly and hope to avoid the balls being lobbed at me while throwing nothing shots back at our opponents.

It actually came down to sudden death where the first person out would end the round. Still two-on-two. But because all the balls wound up on their side, they were forced by rules to pass one to us to level the playing field a bit. So the guy goes to kick the ball over and winds up punting it in the air... right in my hands. He's out! And without me needing to whip the ball at all. Thank God!

I sat out the rest of the night and will likely do so for the next couple weeks to ensure I heal and don't re-aggravate the pain site at all.

Can I just tell you how much coughing hurts right now? I'm doing everything I can to avoid it.

Totally Unrelated Aside (TUA): Have you all seen the movie Once? Any good? Aside from Brandon at DWP! who I know worships it with a passion. How about the soundtrack? I've heard the snippets on iTunes, but wasn't sure if those samples are representative of the album as a whole. Let me know.

I didn't realize dodgeball was so dangerous! Maybe you'll have a speedy recovery and be able to join in on the festivities soon...

It sucks getting old! Though, I love that you're in a dodgeball league. That's hilarious!

Oh, poor baby. I hope you heal quickly. I love that you used the word "gingerly". I'm gonna call you "Gingersnaps" until you heal.

All I can picture is you with the Ben Stiller hairdo straight outta the movie. Hilarious!

ONCE is an amazing awesome movie. It was highly reccommended to me and I had to wait because it came to Cleveland later than other major cities, and when it did, I only found it at 2 theaters. I drove out of my way to the theater and watched it alone. It was WELL WORTH THE DRIVE.

It really moved me and I even cried in the end which is something a movie hasn't made me do (in a theater) for a long time.

The soundtrack is gorgeous. I love Glen Hansard now. GO BUY IT NOW.

I mean it.
xoxo

PS.. you can hear the entire soundtrack here at the official page... http://www.foxsearchlight.com/once/

Bummer on the strain. I'm sure there is a "dodge ball" workout you can do to strengthen all that.

Ha, g-man took my comment, dammit! So I will just tell you that I hope you feel better soon! It stinks that you have to miss games :(.

It's horrible when you pull something and it niggles for ages. It hurts almost as much as a 'real' injury (y'know one with blood and guts and ambulances) but with none of the sympathy!

ouch! i'm sorry you are having to sit out but i hope you feel better soon.

i actually have Once waiting for me to watch. it arrived yesterday. like you, i've heard snippets here and there. some people really love the soundtrack. some people say the movie is slow moving.

kilax, and the danger doesn't even come from the balls. It's all the twisting and turning you do. That'll screw you up.

Lisa, I was in shock about it too. But it exists.

august, gingersnaps? Lovely. Thanks. Good to hear about the movie. I've had it sitting at home for a while now from Netflix and just haven't had the time to watch it.

g-man, I'm afraid of any workout claiming to be specifically for dodgeball. That can't be good.

Bec, it wasn't quite as bad as Justin Long.

sizzle, my copy of Once arrived about a month ago and I just need to find time to watch it. Been lazy.

Once is probably my second-favorite movie of the year behind Juno. It's really good.

Well, hope you recover speedily. I for one am NOT athletic whatsoever. I twisted my ankle numerous times, broken my ribs rollerbladding, and tore my kneecap skiing. I'll probably accidentally kill myself upon impact with a dodgeball.

ajooja, now that's what I call a positive recommendation and one I can totally relate to!

CK, that would be an interesting death considering modern dodgeballs are covered foam. Not the kickballs of our youth. They're kinda weird. Kinda like Death by Nerf. ;-)

Aw, that sucks that the "Dodge, duck, dip, dive, and dodge" will have to wait.

I sympathize though. In college, I paid for an 8 week mini-course of karate/self-defense and had to drop out after the 1st week 'cuz I came down with mono and was at risk of rupturing my spleen.

Take care of yourself!

"Because here at Globo Gym..."
Sorry you have to sit out for the fun. I feel your cough pain with my whole back sitch, it sucks. I hope you heal fast so you can get back to your mad DB skills, your team NEEDS you.

claire, but did you get your money back?

Ouch! I hope you're feeling better soon. Plus I now have a total mental crush on your for playing Dodgeball.

As for Once I saw it and found it incredible. Highly recommended.

Yay! You're back commenting, too! Missed ya!

I'm with Lisa... who knew they had dodgeball for adults. I had to go back and read that again...

Michelle is actually me... my sister was using my laptop. I changed the URL -- and email but didn't change the name. Don't ask. I'm sleepy still.

Michelle, I think the movie made it acceptable for adults to play.

Nat/Michelle, I am too and I need to be on the road in a few minutes. Yay.

sorry to hear about yr injury - take care of yrself!!!!

*lynne*, I'm trying. I do feel better. Thank you for your concern!