Archives Profile Subscribe Links Rankings
We sure are cute for two ugly people...
Nothing stays the same...

Should old acquaintance be forgot...

Happy New Year everyone! Even those of you who might celebrate at another time!

So how did Katie and I ring in the New Year? Three words... naked. snow. angels.

Yep, despite Katie having a sinus infection, we decided on pure impulse to run outside in nothing but pajamas and T-shirts and socks and make snow angels in the six inches of white stuff that fell last night. I triple-dog-dared Katie to do it thinking there was no chance in Hell that she would. Next thing I know, she's running outside and taking a dive into the snow. I followed shortly thereafter.

If it wasn't so cold and the event so short-lived, I would've taken a picture of Katie actually doing it. Instead, you'll have to accept a photo of the aftermath... 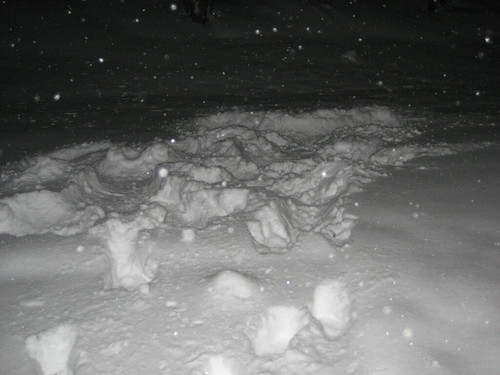 And here is the pile of wet clothing we dropped after we were all done as well as the snow we tracked inside. It was fun. Quite exhilarating. But don't ask us to do it again. 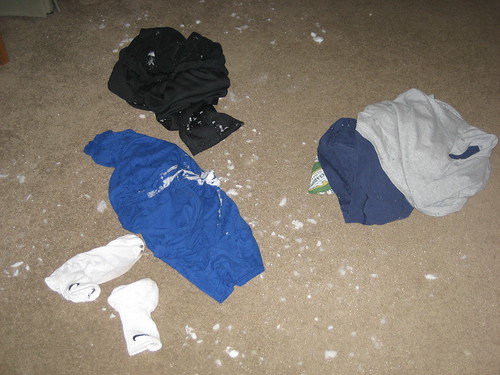 Well, Happy New Year all the same! Go Illini (although you're losing pretty badly as it is)!

that's hilarious though not the smartest if she's suffering from a cold. ;)

So now Katie is trying to use up some sick leave, huh? Happy New Year!

sizzle, nah, not the smartest. But it was a triple dog dare. You can't say no to those. Even if it results in your tongue being stuck to a pole. ;-)

Dagny, anything to get out of work. For shame! ;-)

Your NYE sounds a lot like mine. Minus Snow Angels Naked (isn't that order more appropriate??). I gifted my fiance my nasty cold, which has turned into a much worse sinus attack. We were in bed by 10:45. Surprisingly, we heard nothing at midnight. If you hear no celebrations, did NYE ever happen?!? Hope Katie is feeling better...

Funny. For my Christmas Day post, I was going to have Bad Monkey making snow angels! I changed my mind at the last minute for some reason...

Happiest of New Years to you both. :-)

Nilsa, hope both of you are feeling better. Isn't that question a bit akin to the whole tree falling in the woods bit? Maybe when they figure that one out, they'll find an answer to your question. In the meantime, the clocks keep a rollin'. ;-)

kilax, nothing wrong with a little crazy!

Snowing here again too... maybe I'll run out and make a snow angel for you. Or... you know just think about it.

I dunno. I listened to your advice on Great Lake Swimmers. I think you should listen to my advice on how beneficial snow angels are to your health and run out there now and make one... or two. I triple dog dare you! ;-)

That we are. Or we try to be anyway.

Happy New Year to you, too, Lisa!