Home Archives Profile Subscribe Links Rankings
Cry for the feeling... all for the prize...
Shake, rattle, and roll...

Brah
I was talking to some guy the other day. Not sure who it was or what it was about, but when all was said and done, he finished off the conversation with "no problem, Brah." Yeah, "brah" pronounced like "Erin go..." or an article of feminine undergarment. Since when did this become a way to address your fellow male? "Bro"? Sure. "M'man"? Absolutely. "Homie"? Well, in limited instances. But to call me something that is held in near mythic levels of esteem amongst prepubescent boys (unless it's Molly Ringwald's panties) until they try to unfasten their first one is just downright strange.

Scarlett
Cinematical just posted a preview picture of how actress Rachel Nichols is going to look as Scarlett in next year's G.I. Joe movie. As if I wasn't geeked out enough by the casting of Dennis Quaid as Hawk and the pictures of how Ray Park looks as Snake Eyes, get a load of this... 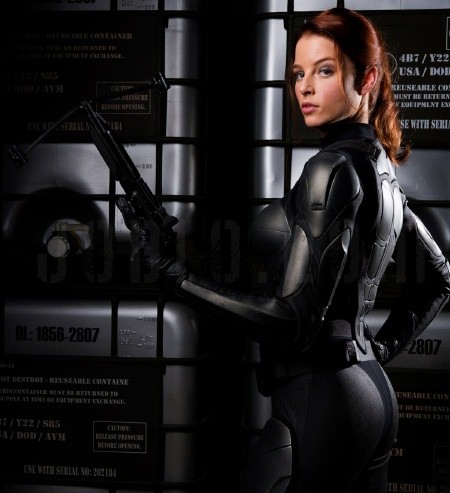 May the angels sing on high.

Freebies
I just noticed that my LinkShare subscription (what I use to allow me to link to the stuff in iTunes) also allows me to create a link to the free singles of the week. So, if you want free songs, there is a button in the sidebar for that now, too. I just gotta keep up with it and change it each week so we'll see how long that lasts. I do tend to get lazy.

Wordpress
I would like to say that Wordpress can suck the sweat off a dead donkey's hairy... well... you get me. Just because I'm posting lots of comments on a variety of different Wordpress-hosted blogs, this does not translate to me spamming Wordpress. THEY ARE DIFFERENT. Don't give me "WOAH! You're commenting too fast! Slow down!" messages, okay? Byte me.

Celeb-vote
Does anyone out there actually take stock in what candidate a celebrity endorses? In the wake of The Boss endorsing Barack Obama, as well as any number of other celebrity candidate endorsements, I was just wondering if anyone even cares?

Honestly? Ever since Clinton and Obama started campaigning dirtier than when they started, I stopped paying attention to the candidates, let alone who is endorsing them.

I commented somewhere recently that I didn't think there was a "celeb crush that I would go gay for".

I would like to take that back. Right. Now.

Nilsa, I was listening to XRT this morning and Lin Brehmer's female cohost mentioned that she watched the Democratic debate last night. Lin said that there was only one other person aside from her who watched it... John McCain... so he could laugh at the collapse of the Dem party.

Britt, I do believe that was Hilly's site, and I was going to mention in this post to her that I would like to change my vote. I'll fight ya. ;-)

"Don't give me "WOAH! You're commenting too fast! Slow down!" messages, okay? Byte me."

Well, I guess you're just too friggin hawt a commenter for Wordpress to handle...

I've heard "bra" quite a bit. It's from "bra-hey", which I think is a bastardization of "brother".

You need to come chill with me here in Southern California for a bit. "Bra" is used often but what's even more popular is "Broham".

The WordPress thing that bugs the crap outta me is the CommentLuv plug in and getting that error message after I comment. I worry that my heartfelt words won't be posted, dammit!

Hilly, yay! I'm not the only one who gets that error message. EVERY TIME I COMMENT ON A SITE WITH COMMENTLUV. I brought it to Karl's attention on his new site and he thought it might be a Mac thing with Safari, until I told him I was using Firefox on my Mac and it also happened on WinXP using Firefox. I think that's when he deactivated it. I think it offers a really cool service showing your most recent post, but not if they can't work out the bugs.

No. Anybody who votes based solely on celebrity endorsements deserve what they get. :-)

Wordpress is very Zen. They don't want us rushing through life.

sizzle, zen? Really? Freaky. I like the 1992 comment. Although I don't remember hearing it back then. Must be, like you, Hilly and Adam are saying, a west coast thing.

Whoa, there was a girl GI Joe? Neat! If I keep working out, I'll have a new Halloween costume. Ha ha. :p

Oh there were several... Scarlett, Lady Jaye, Cover Girl, and Jinx. There may have been more and some newer ones, but those were the ones I remember from when I collected them.

Nope, don't care about celeb endorsements -- I just hope the good ones are behind the one I want.

I'm the same as Nilsa. I can't stand it anymore. I am going to wait until the democratic party figures out their candidate, then start listening again.

sandra, I love the intentional contradiction in your comment. ;-)

kilax, and then it will start all over again but between Republicans and Democrats instead of just within the party. Yay.

I've often be rather bemused by celeb endorsements of, well, anything. Be it Pepsi, Gillette, or Presidential candidates. Who *are* these people that get swayed by that crap?

I don't know where I'd be with UrbanDictionary.com. Seriously. I couldn't blog, that's for sure. Well I could write I suppose. I just couldn't understand anyone else. *sigh*

Please tell me they're casting someone totally bad ass like Michael Dudikoff as Storm Shadow.

The Boss endorses Obama isn't all that ground breaking. But, it's another helper for Obama.

I just wish Obama and Hillary would stop the backbiting. It's causing more people to move to the McCain side.

John, my work Web server has urbandictionary blocked out. Bummer.

Dustin, MICHAEL FRIGGIN' DUDIKOFF?!?! Sweet! I feel so much better knowing that I'm not the only one who grew up on American Ninja movies! Actually, Storm Shadow will be someone named Byung-hun Lee. But it will have Dwayne "Rock" Johnson as Shipwreck and Brendan Fraser as Gung-Ho (reportedly; not confirmed). That will be cool! My admiration for you grows every day, my young Padawan, save for when you obsess about your shoes.

martymankins, totally agree about the infighting of those two. Pretty disheartening. And, yes, total hawtness.

Hmmm looks like an uncomfortable outfit, if you ask me. ;)

I could not care less about celebrities endorsing candidates. Most of them I can't stand, anyway, so hearing their political opinions means nothing. Actually, it ANNOYS me to hear celebrities talking politics. I just want to say, "Shut the frak up! You're a frakking actor, for God's sake. Or a musician. Either way, nobody cares."

Karl, sadly, I'm sure there is someone who cares or the media wouldn't cover it as extensively as they do.

Is the guy Hawaiian possibly? I know that Hawaiians use Brah all the time.

And that picture is HOT, no doubt.

I always wanted to be Scarlett when I played G.I. Joe as a kid. Come to think of it, seeing that picture, I wouldn't mind being her now either.

I was gonna go with "Hawaiian", too. But then my daughter called my son that very word the other day. He seemed confused, but she's all kinds of hip so I'm going to ask if it that's making a comeback.

I endorsed Obama forever ago, what the hell was Bruce waiting for?

G.I. Jane has nothing on her.

Brandon, yeah, that's what a lot of people have been saying... Californian that originated in Hawaii. Oh, and very hot.

Whit, G.I. Jane terrified me. I really felt like Demi could give me a serious butt whooping.

Brah is a Hawaiian word. Don't worry - my dad didn't get it either, lol.

I could care less about Hollywood endorsements. In fact, all that does is make me dislike that particular celebrity. Go look pretty and make a funny movie to make me laugh. I couldn't possibly begin to care less about your politics.

Sheila, celebrities should definitely stick with what they know best. And, sadly, so many celebrities don't even know that particularly well. ;-)