Home Archives Profile Subscribe Links Rankings
On the Dark Side, woah, yeah...
Cry for the feeling... all for the prize...

Surfing with the alien...

Oh, today was a good day on the media front. A very good day, indeed.

I purchased our copy of Juno just a few minutes ago on DVD. Considering how much we both loved this movie (we paid to see it in theaters twice), it was a given that we'd be buying it. We wound up buying it at Circuit City because it came packaged with a replica of the track team T-shirt that Michael Cera wore in the movie. Of course, it's only a large. But, once shrunken, it should be fine for Katie as a workout shirt. And very appropriate considering we've started running ourselves. 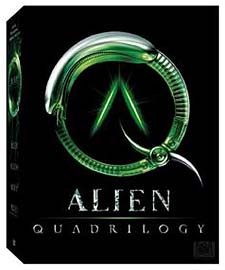 While at CC, I found a copy of the Alien Quadrilogy box set for $19.99. This is a nine-disc set of all four Alien movies that, when it first came out, was nearly $80 and is still retailing for $50 now.

I've been holding off on the Alien movies on DVD for quite some time. I did own the second film, Aliens, the James Cameron masterpiece, on special edition VHS, but, well, it's VHS. We don't even own a VCR anymore. So I finally have my replacement copies and for a killer price! I guess it pays to wait sometimes.

Even if I never watch Alien3 and Alien Resurrection, I've made up my money just with the two original films.

Throw into the mix the fact that I traded some stuff in at GameStop. Enough that I was able to completely pay for my pre-order of Wii Mario Kart and also apply $10 to a pre-order of Guitar Hero: Aerosmith.

Oh yeah, so I'm commiserating with the clerks at GameStop about the sheer number of cool video games that have come out in recent months and those that are upcoming in the next few months and that's when they decide to drop the bomb on me that Rock Band is coming out for the Wii in the next few months. If you have no idea what I'm talking about, think Guitar Hero, but with a guitar (that also doubles as a bass), a drum kit, and a microphone. How freakin' sweet is that? But it'll wind up being about $180 so I may have to hold off. For a looong time.

But I'm off right now. Hopefully to have some Alien-infused fun.

I'm not sure if I ever made it through Alien III (title? AlienS?) or not. I take it from your review that sequels 2 and 3 stand up?

Son1 still has his original Nintendo set in his room (of course next to xbox) Still with the original Donkey Kong, Duck Hunt and Mario! I tell him to sell it but he swears that he never will. It's my punishment for losing a box of baseball cards in our move.

Speaking of Juno....My kid just ran a post about her.

Any way! Son1 still has his original Nintendo with Mario, Duck Hunt and Donkey Kong and a few other games. It's still set up next to the xbox.I keep telling him to sell it but he won't. This is payback for the box of baseball cards I lost in our last move.

I actually enjoy Alien 3 and Resurrection.

That's cool about the Juno gift set - the one I ordered from Amazon didn't have that, unfortunately.

John, Alien3 is actually a number 3 after it, but it's superscripted. I was too lazy to insert the code. Whoops. I thought Alien3 and Resurrection (the second and third sequels) were okay. The really fantastic one is Aliens which is the second movie/first sequel. And, of course, Alien is fantastic.

metalmom, your kid has a blog? Where? I don't blame him for never losing the NES. I wish I had mine and my brother in law does have it still. He loves it.

Avitable, not that they were bad. They just don't stand up to the first two. Kinda like the original Star Wars trilogy. When considered compared to the original trilogy, they're not so great; but by themselves, they're decent enough.

holy cow batman!! You sure hit the jackpot there!! I love it when things work out that way.. !!

It is kinda nice, isn't it? Spend next to nothing and get a lot in return!

I have the first two Alien movies on DVD. Classics both and I've watched them to death. The third one wasn't particularly good with the fourth being somewhat close to unwatchable. Still, getting the first two for that price is a deal in itself sir.

Exactly what I was thinking! I could watch Aliens until the day I die. "Game over, man!"

Haven't seen the last two movies in the series. Aliens rocked, though.

It's interesting how people have such different opinions of movies. The very thing that prompted criticism of Alien Resurrection (4) and Terminator 3: Rise of the Machines is what made me love both of them - the infusion of humor. Seriously, Ripley has some great lines in AR!

Also, you know the scene where Ripley sinks the basketball from across the room? Sigourney Weaver actually DID that on the first take! Everyone's reactions of shock are real. She was pretty shocked herself.

BTW, I think we paid $99 for this set when it first came out.

I don't recall it being the humor I disliked. To be honest, I don't remember why. That's why I'm happy to have them again to watch. $99??? YIKES!