When you're all alone...

First off, I want to thank everyone here for all their birthday wishes. I was truly overwhelmed. To be honest, I wasn't sure if anyone would catch on to my image reference. Yep, that is Sweetness himself, Walter Payton, donning #34, the age I turned on Friday.

However, anyone who has friended me on Facebook needn't have bothered with the reference as they were reminded on their own and I received nearly 30 well wishes. After a couple years on Facebook, during which I've received only a couple birthday wishes, seeing approximately 30 this year just blew my mind. I guess I actually should start paying attention to the birthday list and returning these sentiments. So, anyone not on Facebook, please get on there. It's going to be my primary method of keeping track of your birthdays. Lord knows I won't remember on my own. Seriously... I won't. I'm bad like that. So I guess it's nice to have Facebook.

Oh, and for your viewing pleasure, I took some pictures of the Christmas decorations around our house. I would've taken more of the Christmas tree, but we have a bunch of unwrapped presents underneath and I don't want to reveal them. I'll get a new photo of that later on. Enjoy what I have otherwise in this pictobrowser (or over on Flickr)...

Did I forget to make note of the camera used to take these pictures? Yeah, it's my brand new Sony Alpha A350. Got it earlier today. I bought just the body of it, though, at the Sony outlet store. It's a refurbished camera and with nothing additional but the battery, covers, cords, manuals, etc., and with an additional 20% discount this weekend only, it came to $471. I did tack on a memory card and a four-year protection plan so it came out to a bit more total. But still. I love it. It's wonderful. 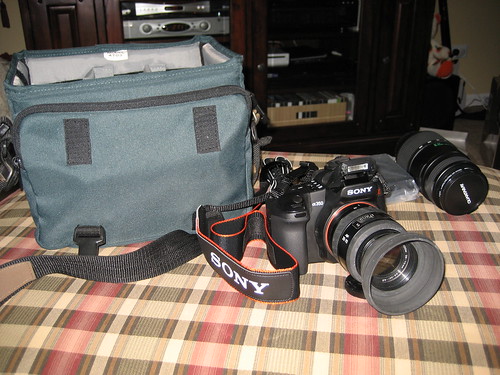 Totally Unrelated Aside (TUA): I woke up this morning and took my shower then came into the bedroom to wake Katie up. She was buried under the covers. Up over her head, in fact. So I peeled back the covers from her head and said, in a sing-song manner, "Katieeeeeee."

She looked at me with the good ol' Katie stinkeye and said, "There is no Katie, only Zuul.

"Are you the Gate Keeper?"

My wife, the movie geek.

Dec 5
'nuff said. Totally Unrelated Aside (TUA): I like when certain Web sites dynamically change the proverbial little things each time you revisit them. For example, a Javascript-based image rotation or how Flickr welcomes you in a different language each time... 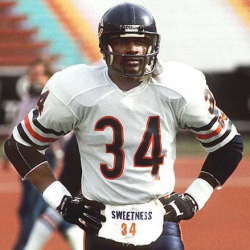 Dec 8
I was watching a little bit of the Oklahoma-Missouri football game (that's "American Football" to all you outside our borders, sorry), and I took issue with something that happened during halftime. Dr. Pepper hosted a football throwing contest (the video...

I think you have to actually go into the "Birthdays" tab under "Events."

"I think there's enough people in that body already" or some such.

sizzle, you said it, blog sistah!

First off, happy birthday! sorry I didn't know, and I agree about fb so I just added you. Secondly, I love your stairs decorations.. they're super cute!

The birthdays are on your Facebook "Home" page (not your "Profile" page), down on the right side bar...they've moved it down the page some, so it's not noticeable as much anymore.

I hope you had a wonderful birthday!!! :)

pocket queen, thanks! And I just added you back. My wife is a snowman junkie. She loves them because you can keep them up all winter long. They don't need to go into hiding after Christmas like Santa stuff does.

Ginger, ah yes, that's where I first saw them. I couldn't find them again so I went into the Events app and clicked the Birthdays tab. I guess either way works. ;-)

Well hell, I didn't catch the bday reference and I'm resisting Facebook for all I'm worth (my friends keep telling me resistance is futile. Damn Star Trek fans!!!)

LOVE the staircase..ha.ha.ha.. a snowman on every step. It's like Christmas exploded in your house. :)

And I LOVE Katie. I toss around movie quotes all the time ( my GB quote usually involves cats and dogs living together, mass hysteria, human sacrifice...) but the BIGGER question is --- did you actually follow through on the whole Key Master/Gate Keeper routine? (bowh..chicka..chicka..bowh..wow..) ha..ha.ha...

I spend about thirty seconds a week on Facebook and I totally missed the point of the post on Friday. I suck!

Zuul! HA HA HA! Why haven't I thought of that?!

I think I have said it before, but I love your nativity scene. I wish that is the one I had.

Avitable, I don't blame you for missing it. I just hope you didn't scratch your head to the point of bleeding. That would be bad. And thanks!

kilax, you can still get that Nativity scene. They sell the parts separately at Hallmark and Marshall Field's, I believe.

I am the key master.

Penguins! We have lots of penguin decorations... obviously... he he

That first photo of the christmas tree is nice... that ledge above the tree reminds me of a friend's house. He has this ledge that circles the room and they run a train on it during the holidays (replacing the plants that are there the other 11 months of the year). It's really cool and you can see all of the cool tunnels, houses and decorations they have.

marty, penguins rock. And I would love to have that ledge on more than just one wall so I could set up the trains my dad owns and I grew up with. That would be great.

We have the same Nativity scene!

Now did you buy the whole thing at once or collect it in pieces? Katie was buying it in segments and I think she finished it all about two years ago.

Happy birthday, may there be many more years of Kapgar sweetness.

I can only hope. And thank you!