Home Archives Profile Subscribe Links Rankings
I might believe you if I didn't know...
Dream until your dream come true...

Retire
Considering the state of the stock market and investments, I'm happy as hell that I'm not planning to retire anytime soon. But on that topic, I did receive a rather funny mailing from one of my retirement benefits providers. On the outside of the envelope, it read, "Take a deep breath. It's still a great time to contribute to your retirement." I liked the "Take a deep breath" touch. Made me laugh. 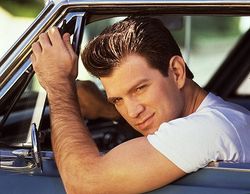 Isaak
For the first time in seven years, my one and only true male crush is releasing a new album! Chris Isaak has an 18-track album (if you buy the extended version from iTunes; otherwise it's 14 tracks) called Mr. Lucky and it's pretty damn good. I have always liked Chris Isaak. Like many, my first exposure to him was getting all wet and twisty with the sheer hotness known as Helena Christensen in the "Wicked Game" video and his voice has had me snared ever since. Yeah, I'm secure enough in my manhood to admit to this crush.

Logs
Has anybody read about this push by some Republican Senators to force all ISPs, colleges, etc. to maintain usage logs for up to two years? This so-called "Internet Safety Act" applies to anyone that offers a Wi-Fi access point to computer users... even if it's password protected... and a home Wi-Fi network. What a load of crap. So you mean if I'm hosting a fantasy football draft at my house and I have friends over logging in, I need to keep all their personal records on file for two years should one of them be busted for illicit goings-on on the Web down the line? Two words... "horse" and "shit." Now, mind you, it hasn't passed yet and if the failure of it to pass the first go-round is any indication, it might never pass. But the prospect of it just completely sucks. 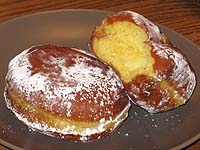 Paczkis
I don't know if the damn things are pronounced PAHTCH-key, POOCH-key, POONCH-key, PAHZ-key, or whatnot, but they're damn good and I bought a dozen of them yesterday for my coworkers and Katie and you'd swear that I'm the most popular guy in the world. Some people brought in ones made at grocery store bakeries. I bought the real deal from one of the few independent bakeries still around this area. And they went over like gangbusters. And it's a good thing I did this yesterday, because...

Ash
...today's Ash Wednesday and Katie and I are gonna try to give up sugar for Lent. Not all sugars as it's nearly impossible to truly give them up without going broke buying special varieties of all food in existence. But just in the more common items like soda, candy, ice cream, pastries, etc. We're also going to do the whole no-meat-on-Friday thing that those wacky Catholics do. This does put a snag in our Pizza Friday routine. Guess we'll be sticking to cheese and spinach. But, the way we figure it, why not use Lent as an excuse to give this stuff up and see if we actually lose some weight in the ensuing 40 days, right? My only problem with it?

OOOoooohhh. Chris Isaak. I might have to break down and get this one. I loved his cable show too.

Never heard of paczkis, (and I come from the land of kolaches) but they look wonderful.

It's not hard to give up all sugars. Just give up carbs. Meat, cheese, leafy vegetables.

Yeah us Catholics are slowly luring you into our world...

That sounded creepy. You know you're a Catholic when you are constantly feeling guilty about something. It's true!

I am working on a Lent post for later today. I'm not Catholic, or really religious, but admire the idea of making a sacrifice/giving up a luxury.

The sugar idea sounds great. I may have to copy you. I am thinking maybe it doesn't exactly suite the purpose though, when I also do it to lose weight. It's an interesting topic. I am happy you brought it up so I can link to you tonight! :)

I love paczkis. We bought 2 dozen and I am not telling how many we have left. I agree, the ones from the bakery are so much better than the grocery store type.

My daughter almost gave up candy for Lent. At the last minute she decided to give up spending money. I am not Catholic so I am not giving anything up but I admire people who do.

I remember as a kid trying to come up with something to give up for Lent that wouldn't pain me which basically defeats the whole purpose. Oh to be a kid! But I am not Catholic anymore.

I love Chris and will have to check out this new album. He's got such a great voice.

Ohhh, they are deadly wonderful. Good thing they're only really made one day
a year. I wonder if Isaak's show is on DVD. I never got to see it when it
aired.

If that's the case, then I've been a Catholic my whole life!

That's why we're not giving up all of them. Just the obvious ones that we
enjoy far more often than we should. From the look of things, though, it
seems as though what we're doing is a modified South Beach as it is. We'll
see how it goes.

I know it's not exactly the point of it all if you're giving it up to help
yourself with a diet, but I'm willing to chalk it up to "cosmic timing
coincidence" and leave it at that. ;-)

Giving up spending money for Lent? Think I can use that excuse with the bill
collectors?

One of the best male voices ever. Let me know if you'd like to hear the
album via our normal routes.

I'd like to know how they'd enforce the keeping of logs. How would they know whether I am or whether I'm not? What kind of access would they have to my wireless router to ensure I'm logging everything they want me to log? It's just ludicrous.

What's even worse is that I have tons of devices hooked up to my wireless
router and I'd be afraid they'd need to me to keep logs on myself. Or maybe
I can just use those as a mask for anybody else who uses my network. "Sorry
Chief, that's my TiVo!"

I'm not Catholic either, but I'm joining a blogging pal in her Lent challenge. She's not giving up anything other than time ... as she's going to go to the gym four times a week. Me, too! No excuses!

Hmm, you know if you're willing to go sacrifice a goat, and pledge your first born, I'm sure the Catholic church will welcome you right in! (side note; I was catholic for most of my childhood, so I say this with humor.)

Now on the other stuff, could you imagine our jails full of folks who deleted the history/files? Heh.

My kid hates Ash Wednesday. She gets all pissed about the ash she's forced to wear on her head (Catholic school). We aren't Catholic, either!
I am giving up nothing. But good luck to you guys!
But curses to you for making me drool all over with that yummy treat!!!! :P
(Oh and I LOVE Chris Isaak!)

That's not a half bad thing to do. I like it! Good luck with your goal.

I've likely already pledged my firstborn to someone else entirely one
drunken night some time ago. ;-)

As for jailing us all, the government would be more prone to releasing
murderers and rapists then us Internet Protection Act violators.

How'd she get into Catholic school if she's not Catholic? Isn't that like
the #1 requirement for entry?

He has a NEW talk show? What channel?

And I found some lint today. it was in the left poc.... oh, you said "lent". Wrong topic. I had turkey and bacon today.

I do NOT want to know where you found, er, Lent.

I'm glad I didn't give up sweets for Lent because that Paczkis picture would've made me give up on day one. I gave up Starbucks by the way. And I AM a wacky Catholic. :)

You still could've given it up considering paczkis are only made on Fat
Tuesday. Maybe a rogue bakery or two breaks the rules, but a real one
wouldn't. Harner's (where I got mine) told me they don't even start making
them until after midnight on Fat Tuesday and they sell them from open until
close that day. Then no more until the next Fat Tuesday.

Okay Paczkis look delicious and that's not helping my diet one bit! (Where is my wine?)

Mmmm... wine... is that part of a low-carb diet? I would really like to
know.

I was waiting for somebody to say that. Thank you. ;-)

I think the reason they told you to take a deep breath is because that's the only free perk you can get anymore...

But I must admit I'm surprised the letter didn't arrive "postage due."

dammit not being a catholic.

I saw Chris Isaak here in Austin before his big b&w video debut and I loved the show and thought "this guy is great and he should make it big" and then the video came out and it was so unlike the rest of his presence or gig.

btw, that legislation is bad no matter what the party affiliation is. I'm wondering why the word "Republican" is headline-worthy. I think it just tilts the emotions one way or the other and takes away from the content.