Archives Profile Subscribe Links Rankings
I am the hunter...
Outta the way...

No, there really is no purpose whatsoever to the title of this post. I just have The Beatle's "Back in the USSR" in my head right now for no reason that I can fathom. Just *popped* in there. At least it's a good song.

Flew in from Miami Beach BOAC...

Rumbly
After getting dressed this morning, I suddenly heard this loud rumbling on the exterior of our house. At least I think it was on the exterior. It sounded like giant sheets of ice breaking apart and sliding down the shingles on the roof. It even woke Katie. But there is no ice. It's all melted. Has been for weeks. We did have a pretty bad rain and wind storm last night so maybe it was some kind of residual effect, but I could find nothing visibly wrong with the house. Still freaky, though. Here's hoping it's not the Mouse Army striking back. 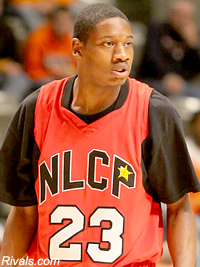 Mona Mildew (@monamildew) Tweeted this question to me a couple days ago and I didn't catch it until this morning, so I'm sorry about that, Mona. She asked what my take was on this. It's an article about the North Lawndale College Prep (NLCP) boys basketball team and how they were assessed a technical foul before the game even began because of a uniform violation. Not even a major violation. Apparently there's a national rule about stripes on the sides of uniforms and how, if you have them, they must run vertically from the armpit to the bottom of the uniform. NLCP has a stripe that was actually more of a half ring that ran the trim around the lower half of the arm holes on their uniform. There is also a similar "stripe" ringing the back half of the neck hole from what I can see. So they were hit with a technical and their opponent, Champaign Centennial, got a point on the board before the game even tipped off. Okay, yes, they were warned the previous day about it, but don't people have better things to do? It's not like it's any sort of obstruction to the other team. Hell, they're barely noticeable. Actually, I think they're kinda cool. Plus, basketball is a game in which, IMHO, the officiating has gotten so lax that players are taking upwards of four and five steps without dribbling the ball and are no longer being called for traveling. I think if the so-called basketball federation should worry about anything, it's getting their officials' heads out of their asses and into the game. Just my pair of Lincolns, though.

Neko
I've been checking out some more new music lately and I just discovered Neko Case. I picked up her Live from Austin, TX CD from the library the other day and am in love. My god she's got a voice. Anybody else out there a fan? I have already checked out her work with the New Pornographers and I can't say I'm as keen about that, but her solo stuff is amazing. I've got two more albums waiting at the library and I desperately want her new album, Middle Cyclone, that just came out a few weeks ago. Library doesn't have that one, though. I will have to wait and make that my album purchase for the month of April. I already got my March album, The Decemberist's new The Hazards of Love. Yes, I am trying to limit myself to one album per month. Not easy, but I can do it.

Lethal
So a woman's body was found facedown on State Street this morning outside Marina Towers and there is a car next to her that has its roof crushed in. Hmmm... me thinks it's time to call in Riggs and Murtaugh. They've seen this before.

Oooh - I have to go check out the story about teh woman's body!!!

I really wish there was more detail. Well, within reason, that is.

I like Neko. I have been waiting for someone I trust to tell me if her new album is worth buying. I am looking at YOU, Kapgar.

That's too much pressure!

Is it too horrible of me that the only thing I can think of is "I'm glad it wasn't my car"?

I keep hearing about Neko Case, but have not heard anything by her. I think I need to find a sample on You Tube or something and give her a shot. I feel like I continue listening to the same playlist over and over and over and very little of it is post-1999.
I hope the weird thud is just Bernard being ornery, and NOT an army of mice! Eek!

When mentioned the noise you heard in your house I immediately thought "Ahhh! Revenge of the Mice!"

It's a scary thought.

I think that probably passed through my head too at some point.

I'd take Bernard over mice too. You can always listen to samples of Neko on
iTunes or Amazon, too.