Last weekend, Katie and I were plowing through the TiVo and we watched what has become our favorite midseason replacement show, Flashpoint (yeah yeah Canadians, I know it's the second season of the show for you, but we just got it now; we're slow like that). This particular episode was about a young couple on a crime spree trying to make the most of their last bit of time together as she has some rare, sudden-onset disease that will kill her within days and for which there is no cure. It was a pretty heartbreaking episode, despite the Bonnie & Clyde aspect of it all.

Anyway, while in a final faceoff with the SRU (Toronto's Strategic Response Unit - the stars of the show), it is revealed to the woman that the guy intended to commit suicide after her death. She was unaware of his intentions, figuring he would battle through and continue living, even without her.

In her attempt to convince him to not kill himself, she said something along the lines of, "You'll find love again, I'm sure of it." You could see the guy crumble inside and out as the weight of her prediction hit him.

This killed me inside, as well.

Katie and I always worry about how much time we have together. Call it my paranoid nature, but I've always viewed life as being a roller coaster - for every up, there is a down. Sure, it's not the best way to live life, but it's always struck me as the most realistic and practical. When you tie that into Katie's family medical history as well as the fact that my grandfather suffered from Parkinson's, well, it doesn't help abate the fear, to say the least.

So when that line came up during the episode, I had to pause the TiVo and I said to Kate, "no matter what happens between us, don't you ever say that to me. Promise me." I couldn't bear hearing it between two fictional characters on TV; how in the hell would I ever be able to handle it in real life coming from her? I couldn't. I think it would just make everything worse.

Yeah, so maybe that's a little selfish especially considering, in this scenario, it would be Katie who is dying, but damn.

Would you want to hear something like that? To some it may be reassurance that your loved one wants the best for you even after they're gone. To someone like me, it's forcing me, the surviving party, to come to grips with the fact that we'll no longer be together. Maybe, in the moment, as this sort of thing is actually happening and we're actually living it, my mind would change, but I just don't know.

Can't you smell that smell...

May 13
I am making a concerted effort to ensure that this blog is more environmentally friendly. To that end, this Snippet Wednesday is 100% compostable and can be used as a very potent fertilizer (read: kapgar.com is more full of shit... 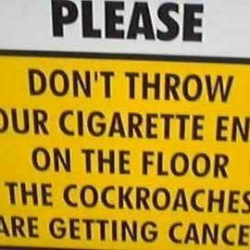 One for the money, two for the show...

May 15
I'm of the opinion that not only should I be enjoying this geeky kick that Katie is on, but, to a safe degree, I ought to exploit it for all its worth while I can. I've suggested a few potential...

I am not sure how I would feel. I do know that when I was dealing with the cancer stuff, we never really talked about the fact that I could die. I assume in the future I would always remain under the belief that everything will be all right and sort of remain in denial of what could happen. Therefore, I guess I'd never say or hear anything like that because we both live in denial and avoidance of the topic. Not necessarily healthy, but that stuff is so difficult to think about, let alone talk about with someone you love!

I'm totally with you on this. My reasons are varied, and oddly difficult to convey. But, I think you come close to the mark as far as my mindset around this is concerned with your last paragraph.

I can't even imagine it.

...thats why you stop and smell the flowers... now!

...thats why you never take each other for granted...now!

Cauze NOW is all you have!

I can't imagine me changing my stance on this, but I guess we never really
know until it's upon us.

Amen to all of the above!

Erm, I'm NOT Canadian, and I've been watching the show since it started on CBS, with the first season a while ago... So I don't understand what you're referencing with us not getting it until now?

As far as being together goes, you have no guarantee. We take each day with what we have, and know that tomorrow isn't promised. It's hard, and sometimes people find it pessimistic, but we don't mean it that way. We HAVE had the talk about what should happen if one of us were to die. It's sad, and unpleasant, but we have. The flipside is that knowing that life can and will go on, even if you leave a gaping hole behind you, is a little bit comforting. You need to know your partner will be all right if anything happens.

I'm probably not putting this correctly. But there is a security in looking at the dire possibility and seeing a way through it, without any loss of love for one another.

That talk would not be easy.

As for Flashpoint, it was just brought here in January. Maybe it was a
decision made on an affiliate-by-affiliate basis and you got lucky and
started early. We didn't have it. It was introduced to us as a "brand new
show." Then I looked it up on IMDb and saw that it was in its second season
but was produced by CTV in association with CBS for primary distribution in
Canada with secondary rights in the US. Weird.

I guess I would want my love to want me to be happy. I think it's something I might say to someone if I was dying but more like, "Be happy." We all have the capacity to love over and over but never really in the same way. Finding love again doesn't make the love you had less valuable or special. But. . .with all that said, I still don't want to think about dying or someone I love dying.

You and Katie are so sweet together. I want that for myself someday.

I guarantee you will. You're too great to not be found and loved by your
"someone special."

Yesterday is but a memory.

Tomorrow is but a dream.

Live for today, because that's all that you have.
It is your gift - that is why it is called the PRESENT!

Awww, K, that was SO sweet! I love your heart! I wouldn't want to hear that either...I'm totally with you there.

I totally agree with the "live for today" sentiment. However, Scott and I have had the talk... I even know that if something were to happen to me (GOD FORBID!) tomorrow, he'd probably end up with my best girlfriend. And I'm okay with that.
As for me, I don't know what I'd do. But I know that Scott really does believe in the "you'll find love again" philosophy. I just can't imagine my life with someone else, but I also can't imagine being alone... So here's hoping we both inherit the good longevity genes from our families!

Yeah, hearing that would just be too painful. And thanks.

I think once you have kids, you kinda need to have that talk (well, that one
among others). But for now, I'd rather never think of it. Here's hoping you
do have those genes. As I recall, they're lengthy.

I don't know... I don't think it would bother me. I mean, *bother* me, sure, but make me angry? I figure - they're dying - they can say what they want!
And I get that paranoia - I get it so completely. Having a kid made me into a nut, but I also think I tend to live in the moment a lot, because of it, too. I've literally always had that in my mind, and make that conscious decision every day. It's weird, and unsettling.
Glad to know I am not the only one!

Not angry, per se. I hope that's not what I was conveying. Just not the sort
of thing I want to hear as I watch my loved one dying. I think it would just
make the whole scenario that much more unbearable.

Well, at least you still have your blog-girlfriend *cough*

A close friend lost her husband of 22 years to cancer last December, and watching her go through that was life-changing for me. I can't imagine her husband saying anything like that to her - they were too busy trying to make the most of every moment they had together, and making sure their kids would come through it ok.

Oh, you've touched a nerve here, hun. My mother died from complications of polio when I was three. My dad remarried when I was five. I can NOT imagine the hell of watching your beloved wife die. My mom is now a widow and my mom-in-law became one in '95. They have both been remarkably strong considering how many years they were married. I've been married to my best friend for almost 30 years. I can't imagine losing him. I can't imagine having to leave him myself. We've talked about this some and it even upsets Hubs to think that in the afterlife we "love everyone". He wants me to "just like everyone else and love him". :) We've had this talk because it was weird to think that my dad is now re-united with my mom and how wonderful that is, but then where does his second wife fit in? I mean... AWKWARD. lol.

I don't think I could find anyone else who would put up with my
eccentricities the way Katie does either. And vice versa.

That's something else I've wondered about regarding this topic... in Heaven,
which "significant other" do you spend your eternity with? Does Heaven
condone polygamy?

The Man would say something like that to me and I'm pretty sure both of us would crack up. We just don't talk that way. It goes more like this...

I would say that to Steven and I imagine he would say that to me. My uncle died and my aunt has been so alone - I think it would make him sad to see how lonely she has been. I do agree that it should be put a certain way when it is said.

I just can't imagine any other way to say that, though. Is your aunt lonely
out of loyalty to your uncle? Or has she tried going out and just not found
that someone special?

I can understand that you don't want your loved one to commit suicide, just becuase you're going to die but there probably is a better way to phrase it. But, that being said, if something were to happen to me early on, I wouldn't want Ted to be alone for the rest of his life.

I understand not wanting them to be alone but, no matter how it's
phrased, I can't imagine anyone wanting to heart anything like that.