Katie and I were watching the most recent episode of The Closer last night in which the team is investigating the involvement of a couple of neo-Nazis in the shooting death of two LAPD officers. As they were interrogating the pair and executing the search warrant of the house where one of them lived, they displayed more and more evidence, both in terms of behavior and material product, of their personal venom.

Although I've wondered this before, I'm pretty sure I've never blogged it... but what has to happen to a person to become that hateful? To just take a wide-bore paintbrush and lay down a stroke that covers an entire people and say "I hate you all"?

"Hate" is an ugly and powerful word, but I cannot say I'm completely immune to it. I have hated in the past. There have been people that have pissed me off so badly or done something to me I have felt was so despicable that I developed what I can only describe as hate or utter contempt for this person. But the difference is that this feeling was targeted at a single person... the person who did wrong by me. I didn't generalize my hatred to everyone that was similar to this person either in terms of race, gender, religion, culture, upbringing, sexual preference, career choice, etc. It was just this one person that I hated and upon whom I imagined all kinds of horrible deaths, simply put.

So how do you wind up hating a whole group of people?

I know psychologists say "you live what you know," meaning that you can inherit these feelings either from your parents/guardians, friends, teachers, siblings, or anyone else who holds a level of influence over you. I believe this wholeheartedly. When you're around something enough, it can take hold in you. Even hatred.

But who made your personal influencer so hateful? Eventually, if you dig back enough generations, there has to be some traumatic event that caused it. That started the whole mad downward spiral into the pit of personal despair. You can't tell me that it dates all the way back to the dawn of mankind, regardless if you believe in evolution or creation.

I'm sorry, but this is such a foreign concept to me. I just can't wrap my brain around it.

Jul 20
Updated to add photo link and to remove failed Pictobrowser embed (whoops) Suffice it to say that after seeing The Flaming Lips in concert last night at the 2009 Pitchfork Music Festival, I'm afraid that any live music experience I... 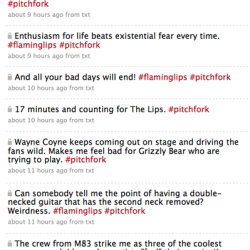 Jul 22
Wilkommen aus Snippet Wednesday nummer googolplex! Yep, despite how the company spells it, the real way is "googol." Looks so funny, though, doesn't it? BMX The BMX photo shoot that I was supposed to do last Thursday had to be... 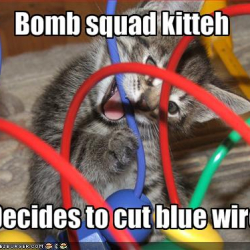 Nope, can't help you there. I don't think I am really capable of hating anyway (though I know, I use the phrase to emphasize something I am upset or angry about).

I cut people out of my life when they hurt me, and even then I really don't hate them. I just don't understand them or feel sorry they are that way and am upset with them... but hate, real genuine deep founded hatred... dunno... such a strong emotion... and such a waste of energy I think...

Dude, it's only Tuesday and you're breaking out with some heavy stuff. Man. Like you, I don't get hate that is so deep. I don't let the world control me to the extent where I feel I have to hate a group of people. Or even individuals, for that matter. I might not like what a person or group of people does or says or believes, but I can't control them. I can only control me.

Coming from a region of the world where most everything is about hate, all I can say is that you not only grow up with it, day in and day out. Such useless, violent and hateful propaganda is taught at home, schools, social circles, what have you. And then people may see certain events that unravel before them which builds about the hate. By the time they're adults, that's all they know.

I've always said it and I'll say it again, crushing hatred of anyone or anything begins at home and at school.

... if ever an answer is found for this question, we might actually be on track to solving the Middle East crisis, and all the other wars, battles, feuds, etc taking place all over the world.

I do think that a "cure" for many people would be to travel travel travel, expose oneself to other cultures, other people, and after a while you stop seeing "religion" or "skin color" and you start seeing the glorious variety that humans exist in.

... me, I don't think I've "hated" anything/anyone in a long long time... thankfully I've moved beyond that...

I question if what I feel is genuine hatred or not, but considering the hell some of these people put me through, it wouldn't surprise me.

I wasn't even thinking about how early in the week it is. I'm just happy to actually have something worthwhile to say for the first time in a while. And you're right about only being able to control yourself.

Yeah, you definitely would have a unique view on this. I hear Boston's a bitch like that. I keed! I keed!

Is it really that bad over there? You hear about it, but, without actually living it yourself, it's hard to relate.

As I told Nilsa, just be happy I'm not blogging my normal tripe for once. ;-)

I watched that show too. (I love that show!) I don't understand how people come to hate like that but I am pretty sure it is a learned behavior passed down from parents to kids.

But it had to start somewhere. Depending on if you believe in creation or evolution, you're saying that the attribution of hate keeps going back all the way to Adam & Eve or the Missing Link. So somewhere, at some time, there had to be someone who hated so purely and thoroughly that it became a sort of genetic disorder. Know what I mean?

I don't understand it either. It makes me sad that people can be so closed-minded to "hate" an entire type of person. It's just wrong! Once you get to know an individual person, you realize that no matter what color, religion, or sexual preference they are, they are people too! The only thing I hate is hatred and closed-mindedness! :(

I've never understood it either. And it *really* infuriates me. My girlfriend is half Native American and half Hispanic. Every once in a great while, and it doesn't happen very often, we get "the look" from someone. And you know what they're thinking and it pisses me off royally.

I was wathcing the great Ken Burns doc, The War last night on PBS. The episode featured a young girl imprisoned with other civilians in the Philippines during WWII, where they were so undernourished that several were dying every day from starvation before the survivors were liberated by U.S. troops. In her diary, she referred to her captors as "Nips" and though her disdain was not explicit, it was certainly implied.

I suppose I can understand surviving such a traumatic event as a catalyst for a sweeping hatred toward a people, but short of an experience like that, I don't get it either.

It's a freaking shame that people are so ignorant and cowardly as to hate an entire race or population of people, but it certainly does exist.
I watched some talk show, eons ago, and there were white supremacist kids on there. This one red haired girl kept talking about how "the jew" was evil but of course she couldn't remotely back up WHY they were evil - it was truly disgusting and infuriating to watch. I wanted to bitch smack her.

Amen to all of that.

I just don't get it. To me, that sounds more fascinating than anything. I had a friend growing up who was half Mexican and half Cherokee. Coolest guy you could ever imagine.

Never seen that doc. I will have to check it out. That might be a bit of an exception to the rule, I suppose. Never thought of that.

Those are the best, when they can't justify why. Not even in the slightest. They always fire back with "because." Sorry, that only works in philosophy classes, not the real world.

I've come to realize that people can really be brainwashed. I learned that when I saw my 16 year old cousin who is basically a religious enthusiast to put it lightly put a picture of a severed fetus head on her FB for shock effect. I don't know what is wrong with people.

They had a local abortion protest over the weekend where they carried signs with those pictures near a busy intersection. Lots of pissed-off drivers with kids in their vehicles, lemme tell ya.