I'm having a lot of trouble wrapping my brain around the idea that not only is tomorrow the U.S. Independence Day, but that we're already halfway through 2009. Just another half to go before we're making contact with the alien races according to bad Roy Scheider sci-fi films.

But the problem is that since the Fourth of July falls on a Saturday, a lot of employers are not sure just how to deal with giving days off to employees. I am off work today, the day before the holiday, since I'm an 8-5, Monday thru Friday office rat. Katie, who for now only works Monday thru Friday, but for an employer who is open seven days a week, won't see a day off. Her day off would be tomorrow, but since she doesn't work Saturdays, she gets nada. That sucks. So I'm here at home typing to all of you while she toils away at work.

Catch up on Google Reader? Three-quarters of a check.

Shower? (sniff) Nowhere near a check. Yet. I promise I'll get to work on this one, not just for your sake but my own as well.

I think I might also check out my neighbor's garage sale that started up this morning. I saw him out placing signs last night and, as much as I used to love garage saling (can that actually be a verb?) with my mom as a kid, I haven't been to one in years. And I'm told, with the economy in the shithole state it's in, garage sales are totally en vogue. Maybe I should join the hipness and go a salin'.

Do you all garage sale at all? Any cool finds? My curiosity is piqued.

But first, I will shower, and I will download my free Star Spangled Banner from Amazon's MP3 store. Yep, you read right. In honor of the holiday, the Amazon MP3 store is giving away one free copy of any version of "The Star Spangled Banner" that they have in stock. Just click on the link above and follow the instructions. There are a ton to choose from. Once I hit number 400 in my browsing, I gave up looking. I had no idea that song had been recorded so many times. 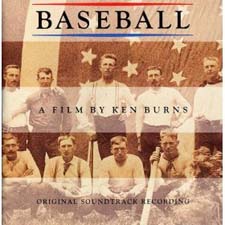 And, shockingly, as much as I thought I'd go for, say, Jimi Hendrix's classic rendition or one from KISS's Alive performances (Ace was on fi-yah playing that one), I instead nabbed one by Branford Marsalis and Bruce Hornsby that was recorded for Ken Burns' Baseball documentary series. This recording really takes me back to my documentary filmmaking days (well, not that I made one on my own, but I was part of a team that made one in grad school). Not to say I'm a huge Ken Burns fan, but the use of music in Baseball was so fantastic and so memorable that it's pretty akin to how Quentin Tarantino chooses music in his movies. Anytime you hear the song afterward, all you can think of is the scene from the movie where it was featured. Just try to tell me you can listen to "Stuck in the Middle with You" by Stealers Wheel and resist the urge to lean over and nibble on your neighbor's ear.

Yeah, okay, anyway. So head over there and nab your favorite version now. Offer ends July 6.

Nuh uh. No way. Not a chance in Heaven or Hell.

Well, maybe I would. But I would have to do some severe steeling up of my gut first. Holy Christ a mighty! Welcome to the new Sky Deck on the outside of Chicago's Sears Tower (fuck Willis Group Holdings). 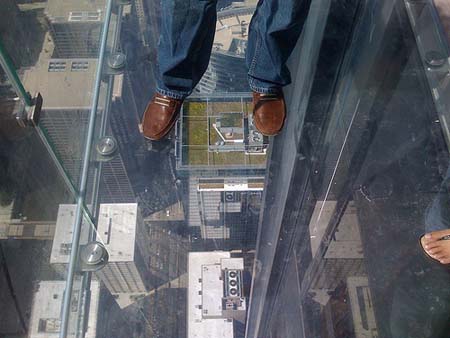 Stupid SkyDeckChicago Flickr group didn't enable the Flickr photo sharing option, so I did it myself! But I still followed all their linkback rules. So ha!

Update: I did find some cool swag at the garage sale! Checky check!

Posted in Entertainment, Me & Mine, Photography, The Web, Vacations & Holidays | Permalink | Comments (10)

But I won't heed the battle call...

Jul 1
Yeah, it's been nearly a week. I go on tears anymore... several days on and several days off. Oh well. At least I'm back in time to celebrate Snippet Wednesday. Wouldn't want to miss that. Grease In the class Katie... 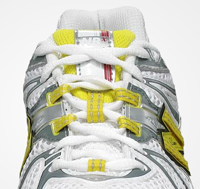 Gave proof through the night...

Jul 5
Katie and I hope you all had a great Fourth of July (whether you observe the U.S. Independence Day or not). We had fun with Katie's brother and his girlfriend at the fireworks in St. Charles, IL. We were going...

Also, can we as a country try to adopt the actual date of Independance, July 2nd? Would it be so hard? Just move it back two days. As it is right now we celebrate a day with zero significance. But I guess everything is wonderful as we all go along in the bliss of ignorance. Plus there are fireworks, that helps.

Now I need to go find it and watch it again.

You wouldn't stand on the Sky Deck? Now you HAVE to!
After you shower. Again.
( They have "The world's Longest Garage Sale" here - well, in Kentucky, and I've been to that. Almost bought this awesome antique dressing table and my friend was like, "No - wait and we'll come back later after looking around..". So we looked around and went back for the table - and some biatch was buying it with her daughter. GAH. My friend will never live that down. I still think of that table!

What holiday do we or anybody for that matter celebrate on the day it
happened? New Year? Christmas? Easter? Yeah, none of them.

I'm terrified at the prospect of the Sky Deck, which, of course, means
I need to do it. Your friend owes you a ton for that.

Garage sales -- the only things i've been buying lately were some new clothes to go with the new job and I really hesitate to get those at garage sales b/c of the time it takes to go through the hassle vs. what I pay for the on-sale items anyway (stores are having great sales now). If I were looking for a specific piece of furniture, I might try them, but I'd probably be more likely to just use Craig's List.

As weird as it's gonna sound, I've never used Craig's List. Not sure why.

You can see those glass boxes hanging out of the side of the Sears Tower! It looks so cool!

Can you imagine being one of the people who constructed them? NO THANKS!