They got me; public enemy number one...

Did you know that there are professionals out there in the world tasked with causing you pain? Seriously. You willingly go in there, contort yourself in all kinds of wild positions while partially disrobed, have someone climb all over you, and then lay there and grunt as they just jack your body in all kinds of directions and do things that your body wouldn't normally do. Oh, and did I mention that the first time you go in there, they take semi-naked pictures of you??

And we pay them to do this to us!

What's worse is that Katie and I have signed up to go along with this.

What's even worse than that is that Katie and I enjoy it and feel great afterward and want even more!

I never thought I would ever go along with such physical abuse. It's unnatural. It's cruel and unusual. And I would think the Geneva Convention has some regulation against it. But alas, they seem to have circumvented the rules and get away with these barbaric practices on a daily basis.

[NO SPOILERS, I SWEAR] Don't you hate when a movie lets you down? Especially one you were looking forward to seeing? That was the case with me and the newly released Public Enemies. Katie and I saw it with my parents on Sunday and I was thoroughly disappointed. 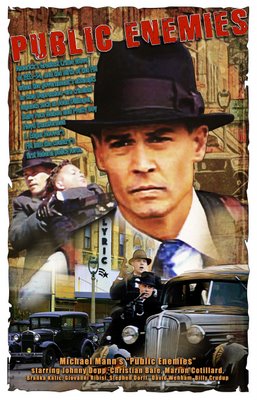 A disjointed and difficult-to-follow timeline of events, odd camerawork (they used digital cameras when traditional film would have worked out so much better for a period piece such as this), uninspired action sequences, a bad script, and completely unsympathetic and wholly unenjoyable characters on the part of everyone involved... yeah, this movie had it all in spades.

That last part is what I don't get the most about this film. Director Michael Mann is known for making his characters, even the worst of them, somewhat sympathetic. In Collateral, even though we're supposed to like Jamie Foxx's put-upon cab driver, I also really enjoyed Tom Cruise's dark assassin. In Heat (one of the most brilliant cops-n-robbers flicks EVER), I couldn't tell you if I liked Al Pacino's cop or Robert DeNiro's robber more because they were both fantastic and well written and brilliantly performed. That diner confrontation between the two remains one of the greatest pieces of filmed dialogue ever, IMHO.

Then comes Public Enemies with the supposed good guy being BI agent Melvin Purvis (Christian Bale) who is tasked with bringing in public enemy numero uno John Dillinger (Johnny Depp). With a story such as this, it would be easy to show either of them as the good guy or the bad guy based on their actions and intentions. Dillinger is bad because he robs banks and shoots people, but he's got that Robin Hood quality in that he never takes money from the people struggling their way through the Great Depression, just the bank's money. Oh, and he's brutally loyal to the people who remain loyal to him. Purvis is good because he's trying to do the right thing by fighting crime in a lawless era, but he could also be just the opposite because he and his team use all kinds of questionable methods to achieve their end result.

What would make us as viewers waffle in our perception of each character would be their backstory or some key bit of information about their lives that we could take to heart to make them either loved or loathed.

And Mann gave us none of that. Both characters were just plain boring. We got little story on them whatsoever. We were just inserted into the middle of the action as it played out (much was the same, in my opinion, of Mann's Ali; although the fantastic acting by Will Smith saved it somewhat for me). And that made this movie no fun for me at all. I really just wanted it to end.

I would ask for my money back on the ticket, but my dad paid for it. Oh well.

Posted in Entertainment, Me & Mine | Permalink | Comments (30)

Gave proof through the night...

Jul 5
Katie and I hope you all had a great Fourth of July (whether you observe the U.S. Independence Day or not). We had fun with Katie's brother and his girlfriend at the fireworks in St. Charles, IL. We were going...
Next Post

Jul 8
Hey everyone. Hope you're having a very happy 7/8/9 Snippet Wednesday. Don't forget to make it an über-celebration by going hog wild for a whole second at 12:34:56 p.m., too! Obsessed? I was driving behind a little PoS car this... 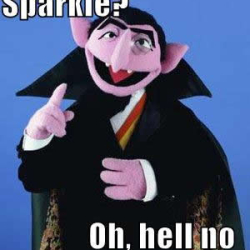 Chiropractors give me the creeps!
Sorry to hear it about the movie. So I guess the reviews I've read were pretty spot - on. Huh.

Ah but you feel so good afterward. And yes the reviews are pretty accurate.

I can't think of chiro's with out seeing Alan from "Two & a Half Men".

Can't agree with you on chiropractors. Jackie went to one for a while and I ended up having to take her to the ER because her back spasmed so badly. I even got dismissed from a jury involving one because I dislike them so much.

You described how I felt about the movie perfectly. I thought the actors did a good acting job but it just lacked everything else. Big fail on their part. They could have done SO much better.

Well, that's sort of disappointing. I was really looking forward to seeing that movie, too!

Ah well, I guess they can't all be winners, right?

Thankfully the chiros here are decidedly not Alan. ;-)

That doesn't sound good. Sorry to hear, but I can completely understand how that might happen. Is she okay now?

I wasn't even all that sold on the acting, to be honest. Yeah, it had so much potential to be good and just wasn't.

Nope, they sure can't. I still say you should see it and make your own determination. I'm just like any other reviewer, in all honesty, that should be taken with the proverbial grain of salt.

Too bad about the movie, I think a lot of people wanted to see this. Not me of course, but most other people.

She is all good now. Fortunately it wasn't anything major bad. Just a few weeks of PT. I am glad however that you saved me $15 dollars and can now wait to watch Public Enemy On Demand when it comes out.

Chiropractors are like Vicodin. Starts out as a healthy relationship, something you need to ease the pain, get through the night, sleep decently and get up the next day able to function. And then pretty soon? If you don't get your fix, you find it hard to move, sleep, or do anything without discomfort. BAM! You're addicted.

Hi, I'm Patti, and I'm addicted to the chiropractor. Sigh.

And yeah, PE sucked. Too much hype? Expectations too high? Not sure...but suckage.

Oh goodie! I can finally sign up for a 12-step program!

Bugger. I was looking forward to going to see this movie and your review isn't the only one that hasn't exactly given it much praise. I think I'll wait for it on DVD. Maybe. Or not.

I thought it was a good character piece. Needed a little editing, but I enjoyed it otherwise. The previews made it feel like an action film, but I knew it wasn't going to be. Maybe that helped with my expectations.

Knowing Michael Mann and how he likes to do slow builds and create dramatic tension, I wasn't expecting a full-blown action film either. But even the action he did manage bored me. Yes, editing would've been a very good thing.

I am surprised the movie was so bad! Guess that one will go directly to the Netflix queue ;)

Just remember, my opinion is just like that of any other reviewer, you gotta take it with a grain of salt and make your own decision on it. I am interested in hearing what you think, though.

Ted and I both see a chiro regularly -- I'm due tomorrow morning for my weekly session and my neck/back are anxious for it. We have some friends that are skeptics, but I'm a life convert.

I think you commented on my post about Public Enemies that we share the same opinion. I was so disappointed! I'm sure Harry Potter will make up for it this weekend.

Yeah, totally agree about Public Enemies. Just Twittered about it. It was so bad that my friend and I walked out with 30 minutes left to go. And I can count on one hand the number of movies I've walked out on.

I've walked out of two in my life. Night of the Comet (but it was my parents' choice to do that) and The Doors. I feel I should give both another shot.

Your review sums up my thoughts exactly. Bummer. I had high hopes for this one.