Hollow it out, pack it in tight, light 'em up, and take a long drag on Snippet Wednesday.

iDependence
I was reading a post on Kevin Spencer's blog about his iPod crapping out and how he suddenly became very aware of how dependent he is on his iPod on a daily basis. I completely agree with him except I never needed my iPod crapping out to tell me that. I'm fully aware of my overdependence on this little electronic gem. I listen to it on my commute to work and nearly all day during work. I use it when I work out and anywhere else I drive and sometimes just when I have a free moment and need a music fix. I would be so lost without my iPod. Is that sad?

Jam
I wasn't going to talk about the new Pearl Jam album, Backspacer, and how much I'm enjoying it so far (probably my favorite album of theirs since Vitalogy), but then I read this review on Chicagoist and realized how nicely it summed up my feelings and decided to share it with you. So here you go.

NCIS
After all that to-do yesterday with regard to NCIS: Los Angeles, what do I do? I forget to set the TiVo for last night's premiere episode. Oh well. Guess we'll be starting with episode two as I see no replay of the first episode in the immediate future. Stupid me. 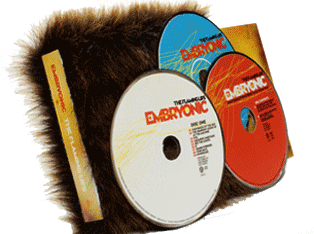 I totally want to preorder the new Flaming Lips album, Embryonic, from their Web site. Not that I actually expect to get either the autographed litho or win the tickets for the New Year's Eve show (although either would be damn cool), I'm in it for the dead Muppet CD case! Tell me that's not cool. Okay, there are a lot of reasons I really want this set, like the DVD/CD and the litho, but that is some damn unique packaging. Oh and if one of you, as a result of seeing this snippet, orders the set and wins something, I'd better get a cut of it. If it's the litho, be creative.

Wizard
Tonight, Katie and I are off to see the wizard. Yep, the wonderful Wizard of Oz. It turns out that a local theater is showing it and hopefully there are still tickets left. With my luck, there won't be. But we shall see. That would be a cool flick to see on the big screen.

You could probably catch NCIS:LA on the web somewhere if you wanted. Or is CBS that far behind the times?

No earphones while driving, I hope. I know it's illegal where I live...

Also your dead Muppet comment made me think of my stuffed animal, Earl the Dead Cat. He came with a death certificate and everything. So silly, and flat. http://www.our-happy-cat.com/image-files/image004.jpg

Oh no, the iPod is docked in my truck to my stereo. As for NCIS: LA, I think
I can catch it online and we may have to, we just don't like to. I hate
sitting in front of the computer to watch TV when we have this big,
beautiful plasma screen and HD cable. The complete opposite of Dr.
Horrible's message during the Emmys. ;-)

I thought YOU were the Wizard.
Damn.

Given that I could survive if my iPod crapped out on me, it should be no surprise that music doesn't play a huge part in my life. But, screw the Chicagoist, I'm coming here for all the latest and greatest in music news!

I remember about a year ago when I had to send my ipod in to be fixed. I was in a panic and very tense without it. I felt so much better when I got it back that I would say I am pretty addicted to it.

I might have to check out the Pearl Jam album. I've liked everything else they've done.

I assumed/hoped that NCIS:LA was going to be available OnDemand, just like the original NCIS... looks like I was wrong :p Oh well. i wasn't too impressed/hooked when the players were introduced in that two-parter, anyway, so I won't go out of my way (i.e. wed-watching) to see it.

I'm actually going to watch the NCIS premiere in a few minutes. Yesterday i finally saw last season's finale. omg Ziva!! What an ending! Can't wait to see how things shape up.

For a second I thought you said "Kevin Spacey's blog" and my heart stopped. Don't do that to me.

After Tuesday night I'm not sure if NCIS: LA will ever live up to the original NCIS. It was a watchable start but for a first episode is was pretty blah. NCIS on the other hand was incredible and an awesome way to kick off the season.

Thanks for putting in the PJ section. I like the album more and more each day.

I'd love to see the Wizard of Oz on the big screen. That really would be a cool flick to see at the movie theater.

I watched NCIS LA and actually didn't like it as much as the original. It might be because I'm not use to the characters, but I thought they could have done a better job. I dunno. Have to wait and see how it goes.

SHHHHH!! You're not supposed to let that out or I'm gonna have to share your
favors with EVERYONE!

While I've always liked music, I never became truly addicted or dependent on
it until my first iPod. It's all over now.

Does this mean I can corrupt you with music?

It's scary to think that can happen, isn't it?

If you've liked all their other stuff, there's no way to not like this one.
At least IMHO.

I haven't seen the NCIS finale. Actually I've only seen a handful or so of
episodes so I have no real footing in the story arc. But I do know who she
is. She's the former Mossad agent, right? Or I think I heard them say
something like that about her.

But Kevin Spencer is sooo much cooler. And he's got a British accent and all
that jazz.

Most of the reviews I've been hearing of NCIS: LA have been middling at
best. Bummer. But the first season of CSI: NY was pretty horrid, too. It got
better.

And this was supposed to be a Hi-Def remastering of the film. Still a little
bummed.

You know, I haven't bought a Pearl Jam album since 'No Code' many moons ago. I think I have a lot of catching up to do.

I would say you do.

There's a website that you can watch the full episodes of NCIS and the new NCIS. It airs on that station the commercials for it, so you can check it out. I don't remember the name of it offhand. Love, love, loved the opener to regular NCIS -
PJ album is fantastic!!!

The problem is that we don't like to watch TV on the Web. Why watch on a
tiny little computer screen while seated on a card-table chair when we could
be on our couch and stuffed chair watching on a 42" plasma? Actually, I just
found that iTunes is offering a free download of the debut episode. I can
load that to my iPod which plugs into my TV and watch that way. Even in HD.
Nice! Will be doing that with the finale of Grey's from last season, too.
Katie still hasn't seen it.

I bought a 25-foot DVI cable so that I can connect my laptop to my HD TV for just such situations. Very nice.

When I've had my iPhone have an issue (or my Treo before that), I get a sort of panic-depression. It's not comfortable. It's only really happened for more than a few minutes a couple of times. Ugh.

Katie's laptop might have that output. I'll have to check into it. Hmmm...

TV for me, I watched the three episodes of Glee... thought the first one was excellent... second one ... good the third not so much... alas. Glee is now on probation.

Still not sure what I think of the new PJ...

There have been three eps of Glee already?

If you do decide to watch LA online you can catch it here:
http://tvshack.net/tv/NCIS__Los_Angeles/season_1/episode_1/

Actually, iTunes offered it as a free download, too. Yay!

I've misplaced my iPod before and know the heartache of being without it.

There's another NCIS show? Are they competing with Law & Order?

It's possible about the competition. Not entirely positive. But both NCIS
shows run back to back if that helps you figure it out.